Why Canada’s political system makes it difficult to fight floods

Floods are some of the most damaging weather-related events in Canada, occurring so frequently that they’re the most commonly experienced natural hazard. In recent years, Canadians have witnessed a number of floods of historic proportions, largely in Eastern Canada.

Scant attention is paid to how history has shaped our approach to flood management in Canada. More specifically, little consideration is given to how our system of government handles hazard management, and how the current situation can be improved through the application of what’s known as “international relations theory.”

What’s in a theory?

Tackling these hazards is hard because it requires a variety of states, each with their own interests and goals, to come together to address a common issue, provide a common good or achieve a collective objective.

These problems also suffer from what international relations theory identifies as the free-rider problem: Some states can reap the benefits of the collective actions of others while not fully committing to paying the associated costs themselves. Effectively, they get a free ride. For example, U.S. President Donald Trump claims that Canada and other American allies are free-riding on their NATO defence spending obligations.

There have been a variety of attempts to solve the problems associated with the need to take collective action, including the establishment of specialized international organizations like the International Monetary Fund (IMF) as well as regulatory regimes like the United Nations Framework Convention on Climate Change (UNFCCC).

The recurring effects of flooding in Eastern Canada and wildfires in Western Canada are examples of collective action problems within the boundaries of Canada.

Canadian history can give us better perspective on why co-ordinating flood management, in particular, has proven so difficult in Canada and what can be done about it.

The administrative makeup of Canada ensures that roles, responsibilities and accountability for a host of issues — like emergency management, building codes, land-use planning and the administration of renewable resources — are spread among three levels of government and other entities, including private firms.

The British North America Act and, later, the 1982 Constitution Act, assigned the management of forests and water to the provinces and territories.

This ensures that an often confusing host of local, provincial or territorial and federal ministries, departments and agencies have authority over how the hazards of wildfires and floods are managed.

In the case of forest management, there are 13 provincial and territorial ministries and one federal body that oversee Canada’s forests.

The situation is far more convoluted for flood management, as a greater number of ministries, agencies, departments, authorities, councils and other entities shoulder responsibility.

A flood of authorities

In Ontario alone, this includes 36 conservation authorities, the provincial Ministry of Natural Resources and Forestry, 444 municipalities, the federal government — for waterways like the Trent-Severn, Rideau Canal and St. Lawrence Seaway, as well as Indigenous communities — and other owners of private flood management infrastructure.

Across the rest of the country, there is a similar mix of provincial ministries, federal, provincial and municipal agencies and departments, basin and watershed planning and advisory councils and private flood management infrastructure owners. All of them have varying levels of conflicting responsibilities and authority.

In most jurisdictions, there is no single entity in charge of flood risk. Within larger entities, there are separate departments that deal with various aspects of flood risk, from flood mapping, hydrology, flood modelling and flood defence to conservation and disaster assistance.

Flood management in Canada, in fact, is rife with the co-ordination problems highlighted in international relations theory and seen globally when it comes to combating other impacts of climate change and extreme weather events.

There are three major issues that highlight collective action problems in the governance of flood risk in Canada:

1) The patchwork of entities responsible for governing floods have a hard time communicating and co-ordinating among themselves.

2) The winding-down of the federal Flood Damage Reduction Program, Canada’s de facto coordinating body for flood governance, created a two-decade gap of communication between the provinces and the federal government. The program was significant because it set standards and facilitated cost-sharing. It was a co-ordinating body, setting minimum national standards for flood plain mapping and disaster assistance.

The federal government attempted to remedy the communication and co-ordination problems by earmarking $200 million in the 2014 budget for the creation of the National Disaster Mitigation Program.

It successfully set out flood mapping guidelines, but funding to the program ceases in 2020 and there’s been no announcement of a renewal.

3) Canadian flood risk governance suffers from the aforementioned free-rider problem. Municipalities control what gets built and where, enjoying the permit fees and property tax revenue from those decisions, but do not directly fund disaster assistance when catastrophe strikes. Instead, the provincial and federal governments do.

Private developers also exercise power over these decisions. But again, they don’t directly pay the costs for disaster assistance when their developments are flooded.

In fact, there are few incentives for decision-makers to pay the costs associated with making different choices when it comes to development and flood risk.

So are there any solutions contained within international relations theory when it comes to the flood management dilemma?

International relations theory informs us that collective action is difficult when dealing with situations where multiple actors at various levels of authority are involved.

It also suggests that the creation of dedicated institutions to assist with co-ordination can help and is precisely what is needed for flood risk governance in Canada.

The provinces and territories should establish a directorate or centre that would serve as a central hub for flood management and oversight in their respective jurisdictions.

The federal government should make the National Disaster Mitigation Program permanent and continue to restore flood-related communication, co-ordination, standard setting and cost sharing with the provinces, territories and other stakeholders. The program should create a holistic, risk management-based national flood management program.

We should not delay further action on the co-ordination of flood management strategies in Canada, especially given the recurring deluge of impacts on individuals and communities across the country.

[ Thanks for reading! We can send you The Conversation’s stories every day in an informative email. Sign up today. ] 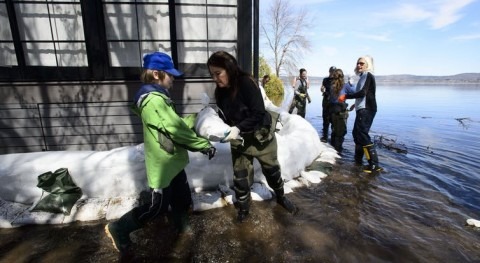 Harnessing the full benefit of AI in water