Tabletop games about water and the environment

April 11 is International Tabletop Day, also known as Board Game Day, games I am a big fan of (just check out my Instagram profile). Needless to say, the tabletop game industry is far from being as important as the water sector (or the broad environmental sector), but this almost domestic hobby (very useful whenever you cannot leave your home) has changed from being something only nerds enjoy to something trendy.

Whether they are card or dice games, conventional board games, role-playing games or contemporary games (which include wargames, miniature games or theme games (with a broad sub-classification I will not go into), they offer a learning experience in terms of social skills and why not, intellectual skills. So, why not put together our passion for water and the environment with home entertainment? Below you will find a list of perfect games to learn about water, biodiversity, climate change, and the environment in general, for all tastes.

It is the year 1922. The canons of the Great War have been silent for four years, and the world is recovering, rising from its ashes at the pace of the new hydropower technology, the legacy of the great Nikola Tesla. In this new war, to be fought in the valleys of the Alps, players have to plan the construction of hydropower infrastructure in a challenging map that combines public, private, and public-private water management. Will you be able to defeat your opponents and build the biggest hydropower empire ever seen in the world? 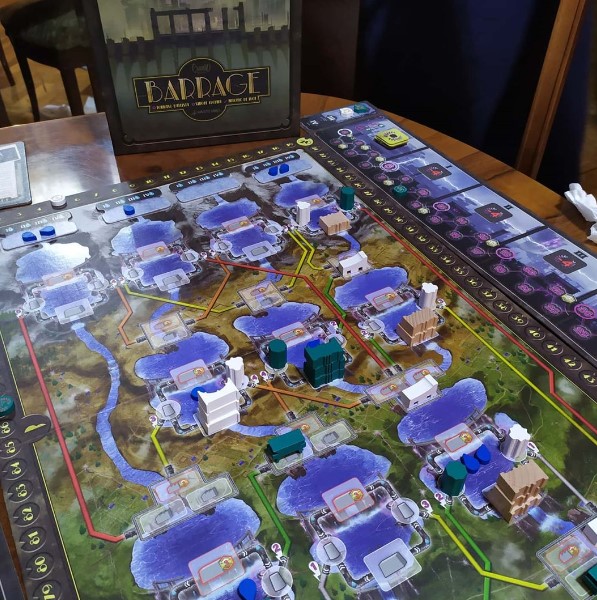 In the 70s, the world’s leaders had to face an unprecedented demand for energy, solved by building thermal power stations without taking into account the pollution they caused. Years later, the impact of pollution is overwhelming and humankind has realised the need to produce energy using clean sources (renewable energies), including hydropower. Players take on the role of companies who collaborate to combat CO2 rising in the atmosphere, and, unless it’s stopped, they lose. And there is only this one chance. 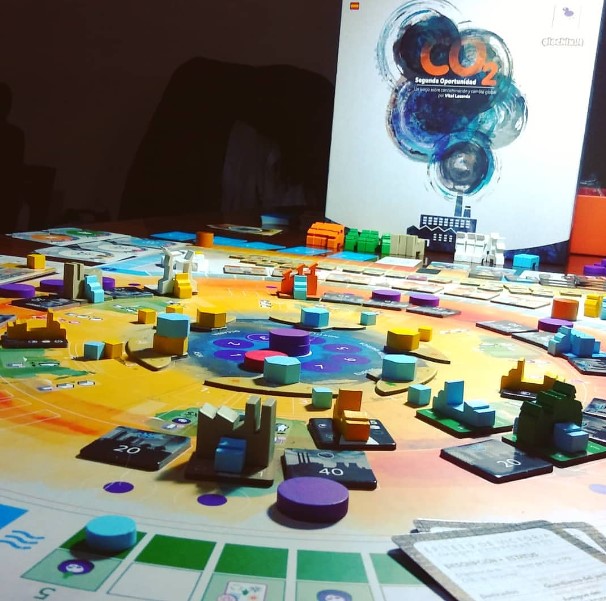 From the ashes of war, nations rise to power in the atomic age. Each player controls one nation which fights for power in the last half of the 20th century. Their nation’s industry, trade and government advance as they acquire resources, build structures and harness energy sources. The price of oil is increasing, and nuclear energy seems to be the future. However, the uncertain global impacts that result from industrialisation’s side effects and pollution are a major threat for players. Careful use of science can help mitigate the negative effects of industry and can also help prevent global crises. 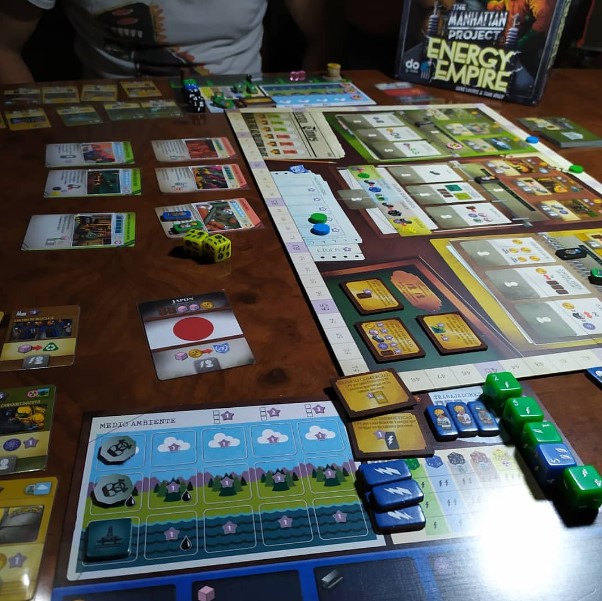 Tabletop games for meteorologists and oceanographers (for all tastes, water in its different formats)

In Petrichor players are a cloud. It's as simple as that. The game consists of controlling the climate to be the only one responsible for the growth of most crops. But the other clouds will also try to do the same. You have to be ready to do some mischief across the sky. Do you want to be a cloud? 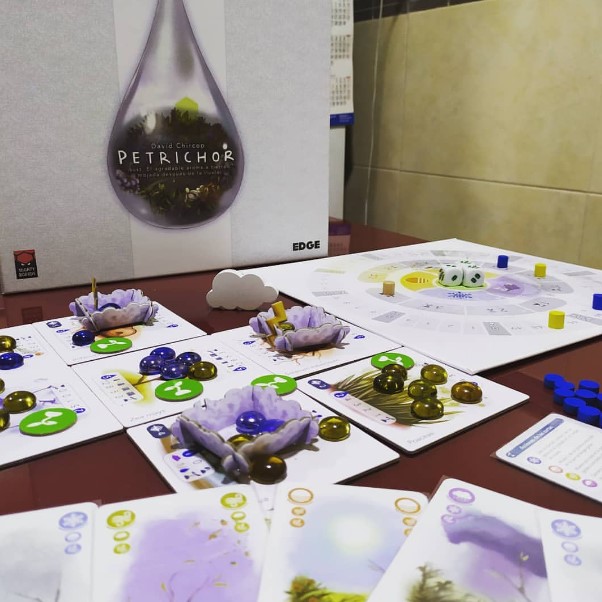 In Reef, players represent a coral reef and decide how to grow in size and shape according to the patterns they themselves select. Will they be able to create the most valuable and precious structure? The wonders of the oceans within reach. 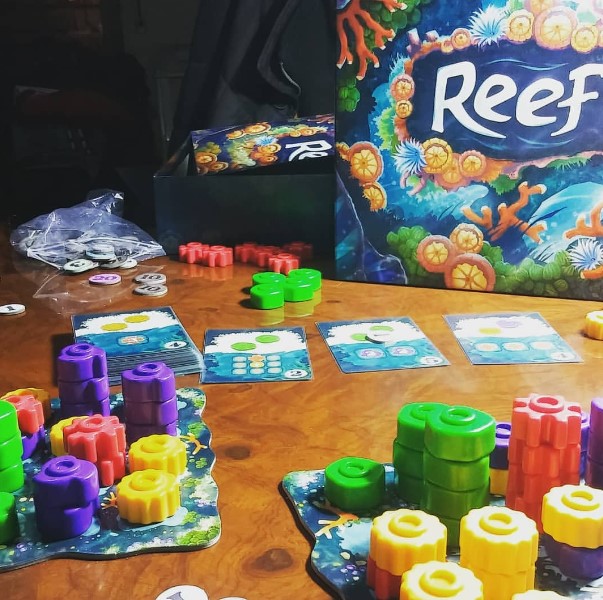 Oceans represent the limits between the known world close to the surface and the mysteries that lie in the unexplored regions of Earth. The base of the ocean’s trophic chain are thousands of billions of unicellular organisms known as phytoplankton that capture the sun’s energy through photosynthesis and all other species in the ocean are predators, each one larger than the other. But there is more to it if you are willing to get deep into it... 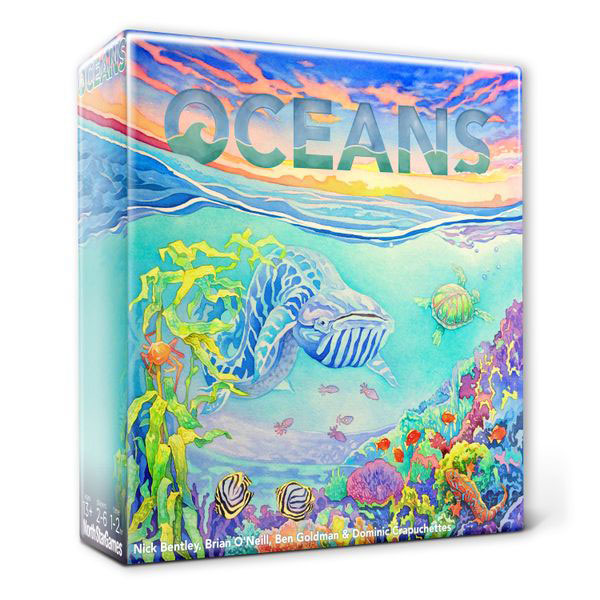 For agronomists and farmers (the importance of the agricultural sector)

Central Europe, 1670 A.D. The plague that devastated the land since 1348 has retreated and the communities in the region thrive again. It is time to plough, sow and harvest crop fields, expand and upgrade homes, as well as eat meat to put behind the past times of famine. 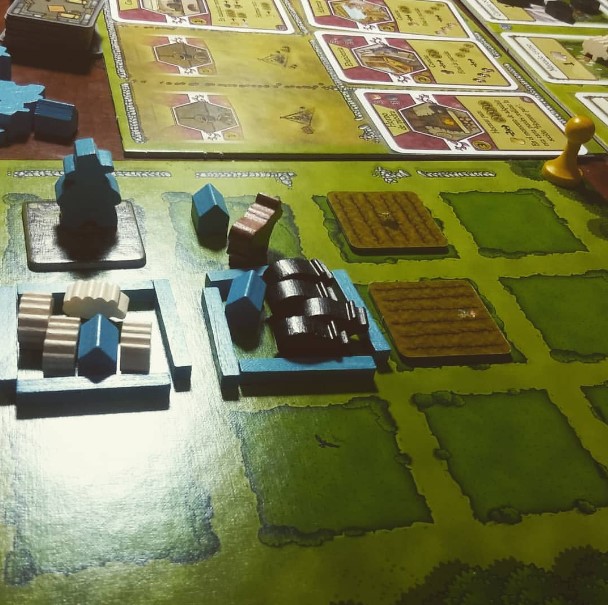 Reykholt is a game where players compete to become the best farmer, amid beautiful Icelandic landscapes. They must grow their best vegetables, but they have to keep in mind that the tourist season is very short in Reykholt and you have to be quick to be the first to take the exotic Icelandic vegetables that fascinate tourists to the market. Who will be the best farmer? 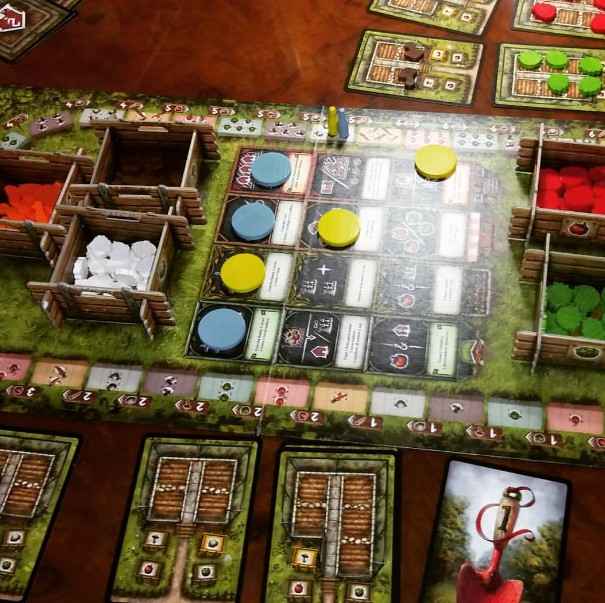 Tabletop games for botanists (as beautiful as real plants)

Arboretum is a card game where players must create a beautiful botanical garden dedicated to different tree species (blue spruce, cassia trees, cherry trees, dogwood, willows, jacaranda trees, maple trees, oaks, royal poinciana trees and tulip trees). But designing an arboretum is not an easy task; its paths have to follow a logic so that visitors can take in the beauty of each tree planted. 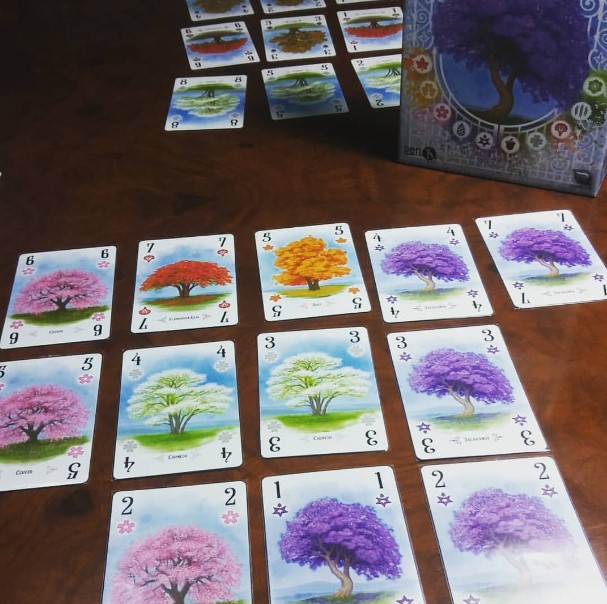 Players become gardeners. A beautiful and elegant game where they have to collect and plant herbs in order to have the largest collection of herbs in their plant pots. You cannot dilly dally, or the other players will plant them first! 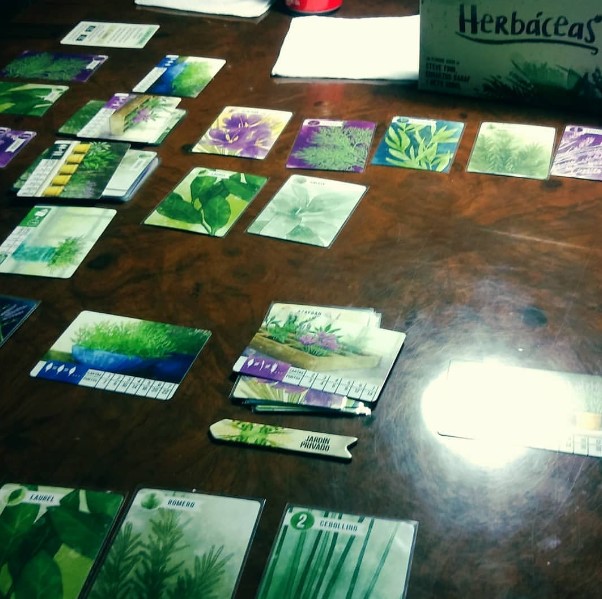 Wingspan is a competitive game about bird production and collection. Players are bird lovers (researchers, bird watchers, ornithologists and collectors) who try to discover and attract the most interesting species to their aviary. Each bird is a component of the powerful chains of combinations (actions) that form habitats: forests, plains or water. 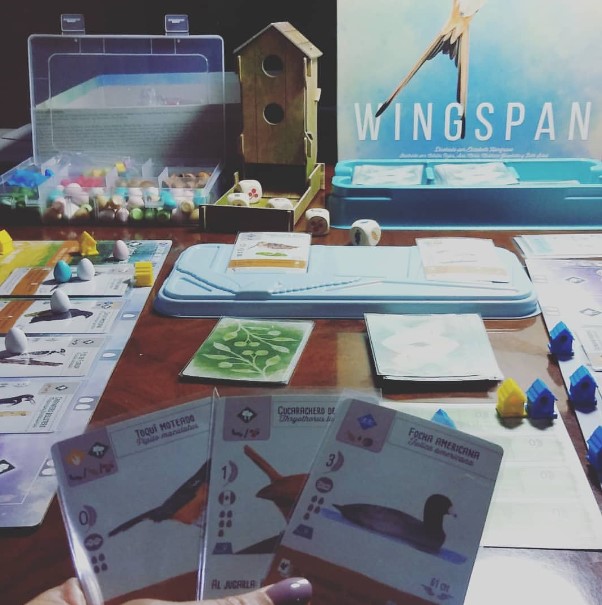 A butterfly garden requires vision and a caring hand. Spring has arrived and the world is blooming. As the garden grows, the caterpillars will gather and transform into beautiful butterflies eager for nectar. The player’s mission is to build the most beautiful garden to attract pretty butterflies. 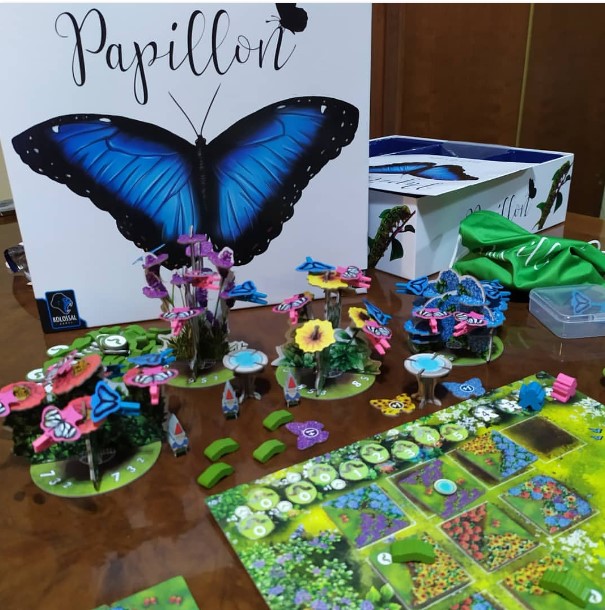 March of the ants

When dawn breaks, the snow starts to melt. Deep in the meadow’s grass, the queen stirs in its nest and the colony comes alive. The soldiers venture outside, fighting with centipedes while they clash with opposing colonies for the land. Workers dig a network of tunnels that expand as they relentlessly search for food and the first larvae hatch. The challenge for the players involves settling into new lands as they rear larvae and take their ants to the collection sites. Will they clash with rival colonies that aim to reclaim the land for themselves, or will they establish pacific and symbiotic relationships, sharing the booty? 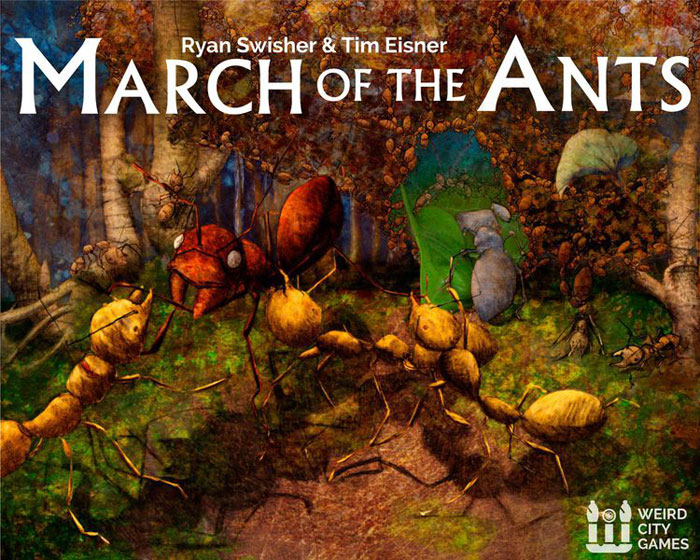 After millions of years of Earth being a bare land, animal life is finally emerging. But all living beings are being formed and experiencing constant change. Only those species which are able to adapt to ever changing conditions will survive to leave their mark in history. Here, players must strive to create the strongest species and become Darwin’s choice. 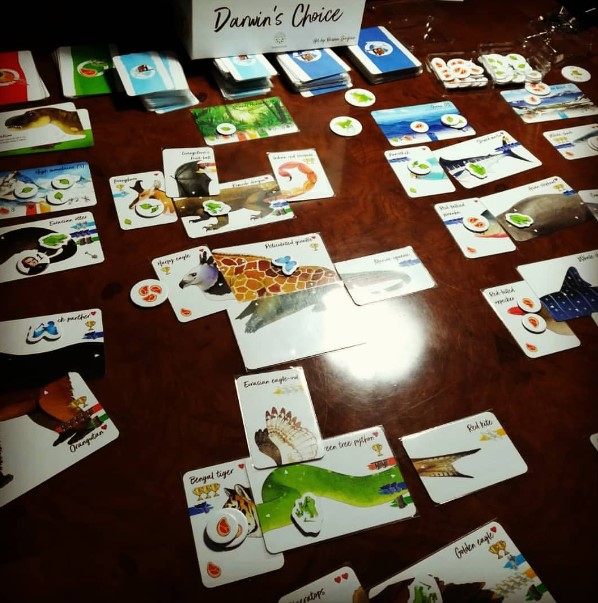 I could go on with a few more tabletop games which, although not focused on the environment, revolve around the idea of natural resource depletion on Earth and the search for liveable places (Terraforming Mars, Black Angel, etc.), but I think this is a good list to start with. Shall we play a game?