Blogs213
Lin Crase
Professor Lin Crase is Professor of Economics and Head of School of Commerce. He joined UniSA in February 2016. Prior to commencing at UniSA, Lin was Professor and Director of the Centre for Water Policy and Management at La Trobe University.
web

The bipartisan parliamentary vote to transform the A$3.9 billion Building Australia Fund into a pot of cash to drought-proof Australia, the Future Drought Fund, should not be taken as universal endorsement.

Labor opposed the idea before caving in, saying it did not “want to be painted as a party that opposes support for farmers”.

Rather, it simply shows that Australian politicians coalesce on some things: few miss the opportunity to be photographed with an affectionate child, and even fewer are willing to be critical of public funds being handed to drought-stricken farmers.

But support something (or feeling too scared not to oppose something), doesn’t necessarily make it the right policy.

Australian governments have sought to drought-proof parts of inland Australia through publicly funded irrigation schemes for much of the past century.

Whenever dryland farmers experienced drought, they were viewed as having experienced a natural disaster, even though the variability of dryland rains was well understood.

First there was a growing realisation that public monies spent on irrigation were not the best means of dealing with a variable climate.

We’ve moved away from thinking about drought as disaster

Second, governments started to describe drought differently, culminating in a 1992 National Drought Policy that required farmers to be more self-reliant and absorb the impacts of drought as something to be expected.

The decades that followed continued this trend with all states and the Commonwealth agreeing on national principles in 2013. Concessional loans and a farm management deposit scheme with taxation advantages were available to help farmers, but would only be useful to those that were viable in the long term.

A Farm Household Allowance, set at the level of Newstart and available for up to four years in return for setting out a plan to improve the farmer’s financial circumstances, was also introduced in 2015 and refined in 2018.

Part of the thinking was that climate change is expected to make droughts more common and severe, although there are good reasons for encouraging adaptation to the existing climate in any case.

Read more: Helping farmers in distress doesn't help them be the best: the drought relief dilemma

However, getting the balance right between “supporting” farm businesses and encouraging them to adapt and be self-reliant isn’t straightforward, especially when the climate and political cycles coincide.

It’s hard to imagine politicians being fiscally prudent when they know they have access to a drought slush fund and are heading into an election during a drying phase.

So, what’s wrong with the new drought fund?

First, there is mounting evidence that farm businesses can actually benefit from drought in the longer term. This seems to occur because businesses that go through a drought develop coping strategies that when invoked in good years produce much greater profits.

That is not to say that droughts are financially a good thing – but it does mean that shielding farm businesses from drought runs the risk that they will not adapt.

Second, an obsession with drought undoes much of the good work done in reclassifying it as something to be expected rather than a natural disaster. Nearly all of the natural disaster payments made in the decade leading up to 2012-13 – one of the driest on record – were spent on rebuilding after floods and storms rather than droughts.

Third, while repurposing the Building Australia Fund as the Future Drought Fund is designed to appeal to rural and regional voters, it is unlikely to help them. Agriculture simply does not generate the jobs that it once did and public pronouncements about drought-proofing will not change the underlying economics of farm businesses and regional communities.

Farming is generally helped by scale, and that means bigger farms with bigger machines displacing smaller farms. The upshot is fewer jobs and the shutdown of small towns, allowing only the larger regional centres to survive. Finding ways to manage this social phenomenon should be the priority rather than shielding farms from drought.

But it’s hard to be optimistic. Politicians love handing cheques to farmers as much as they love photographs with adoring children.

Lin Crase, Professor of Economics and Head of School, University of South Australia 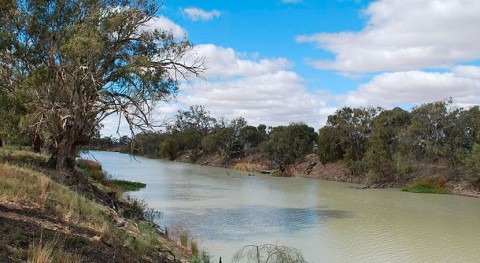