Five things you probably have wrong about rain

There’s been so much rain over the last few weeks it’s hard to believe much of the UK is in drought. Even as people trudge home drenched to the skin there are still hosepipe bans in place. After another record-breaking hot summer, UK reservoirs are still well below normal levels. In 2022 so far, the south of England has had 20% less rain than average.

Talking about the weather may be a national pastime. But there are things even British people may not know about rain.

The small ones (about 1mm, the thickness of a credit card) are spherical. The larger rain drops are the more they flatten until they are the shape of a burger bun (flat side down). When they become larger than 5mm, about the size of a pencil top rubber, they break into smaller drops.

The shape is created by the interaction between two forces: the surface tension of water and the pressure caused by the drop falling through air. Surface tension forces the drop into a form with the smallest possible surface area, a sphere. This is the dominant force on small rain drops because less air needs to be pushed aside than with larger drops.

Bigger drops expose a larger area to the air and fall faster, making the pressure effect greater. This squashes the bottom of the drop, causing that side to flatten. This pressure creates a dip, a carrier bag shape and eventually breaks up the drop.

Shape is important because it affects electro-magnetic signals passing through rain. It also gives forecasting technology extra information about what weather to expect. The latest technologies are improving the measurement of rainfall using the shape information and could improve flash flood forecasts.

2. The UK isn’t as wet as people think

Globally, average rainfall is around 1,000mm per year. Britain, is just a bit above this, with 1,150mm – but the south east has far less.

There’s huge variation across the UK with less than 550mm around the Thames estuary, but over 3,000mm in the hills of western Scotland and well over 2,000mm in the Welsh mountains and Lake District. The west is much wetter than the east. But the effects of hills makes a massive difference. Air rising over hills and mountains generates extra water so flat areas are often less rainy.

Worldwide there are deserts with almost no rainfall and tropical areas that get enormous amounts of rain. The Indian state of Mawsynram has almost 12,000mm of rain per year.

Slight rain is less than 0.5 mm per hour while a heavy shower is more than 10mm an hour.

Rain gauges were one of the first scientific instruments. People from modern India were using them around 2,500 years ago. They were standardised in 1441, when King Sejong in Korea sent a rain gauge to every village to measure farmers’ potential harvests and set tax rates. The tipping bucket gauge, a tube shaped container with a funnel was invented in 1662 by two titans of science, Christopher Wren and Robert Hooke. While a standard gauge has to be read by a human operator the tipping bucket is partially automated. The originals were powered with clockwork cogs and a pen moved slowly over paper to make a record of rainfall rate.

The standard rain gauge used all over the world today is virtually identical to the one created in 1441.

The rain gauge can measure only at the exact place it is installed. Rainfall can be different just metres away.

Rain is also measured by radar across much of the world. The radars in the UK measure up to 250km from the site in all directions. The network (comprised of a total of 18 radar across the UK and Ireland) provides rainfall rate estimates in 1km squares every five minutes telling us about rain anywhere, rather than just at the specific location of a rain gauge. However the rain gauge is critical for the climate record and as it has been the standard measurement across the world for so long.

4. Most rain in the UK is actually melted snow

When we see rain, it has fallen from several kilometres above us. Much precipitation forms at heights where it is below freezing. The ice that clouds are made of create rain.

Warm rain, where the process happens in temperatures above freezing, is unusual in the UK but not in the tropics. When ice reaches air warmer than 0⁰C it starts to melt. The level at which it melts on its journey down to us can vary from the ground to about 4km.

This is why predicting snow in the UK is complicated. In much of the world, snow falls at much colder temperatures. If it’s -5℃ outside a 2℃ temperature error makes no difference. In the UK most snow falls when air temperatures are close to 0⁰C. A small difference in temperature, 2℃ degrees, will change whether there is is rain, sleet (melting snow) or snow.

Look carefully a car windscreen during rain and you can see that the spots landing are of different sizes.

Rain is made of drops of various sizes, from less than 1mm to drops over 5mm in size, the heavier the rain, the more large drops (but little change on the number of the smallest ones). Drizzle tends to have a different character, with lots of tiny drops (less than 1mm across). You may also notice the first sign of rain in heavy showers is a sparse pattering of huge rain drops. That’s because the large drops fall faster than small drops, so reach the ground first.

Drop size affects the strength of mobile phone and TV signals and similar electromagnetic waves. More energy is lost to large drops. This leads to weaker signals, potentially even drop outs if the rain is heavy enough. But meteorologists can use drop size to detect the intensity of rainfall.

Next time it rains look out of the window. Go outside and feel it fall on your skin, marvel at the physics as it happens around you. It might even take your mind off the damp weather.

Drought: heavy rain now might be a serious problem for the UK’s parched landscape 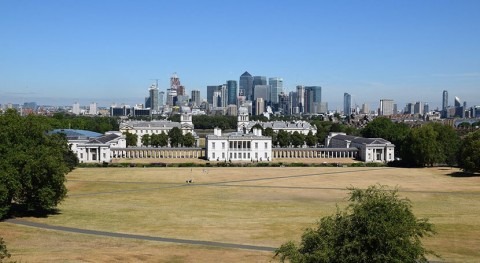