Conducting science in the Amazon requires not only surmounting major logistical challenges but also climbing stairs – many stairs, almost 1,500 in a single climb if possible. The effort is worthwhile, as it has led to discoveries about the impact of climate change on the Amazon and of the Amazon rainforest’s impact on the global climate.

The staircase in question is part of the Amazon Tall Tower Observatory (ATTO), which at 325 m is almost the same height as the Eiffel Tower in Paris, France (324 m). The ATTO is located in the heart of the rainforest on the Uatumã Sustainable Development Reserve, some 150 km northeast of Manaus, Amazonas State.

Scientists have installed equipment to capture data on forest-atmosphere exchanges and fluxes so that they can analyze levels of carbon dioxide (CO2) in the atmosphere, the radiation balance, and fluxes of ozone and aerosols (liquid or solid particles suspended in the air), among other key indicators they are using to build a picture of the Amazon rainforest’s importance.

One of these scientists is Antônio Huxley do Nascimento. During monthly visits, each lasting approximately ten days, he climbs to the top of the tower every single day. An instrumentation technician with Brazil’s National Institute of Amazon Research (INPA), Nascimento monitors some pieces of equipment installed at the ATTO, of which there are more than 100. His safety gear while climbing includes a harness, lanyards, carabiners, and a rope tethering his waist to the handrail.

Nascimento checks data and ensures that the equipment is running properly. “The devices involved collect complex data and must run uninterruptedly. They generate a huge amount of information, which is accessed by researchers in laboratories in Brazil and Germany. We have to check it all very frequently to make sure everything is in order on the tower,” he told Agência FAPESP. 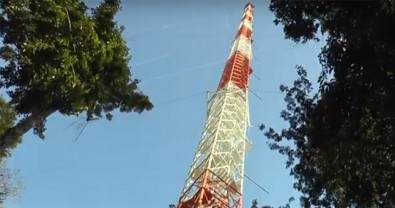 The 325 m tall tower, built by a partnership between Brazil and Germany, is the starting point for the collection and analysis of data that is deepening scientists’ understanding of the Amazon’s importance to the world (image: Agência FAPESP)

The ATTO has been operating since 2015 and cost €8.4 million to build. Half was funded by the German government and Max Planck Society, and the other half was funded by Brazil's Ministry for Science, Technology, Innovation and Communications (MCTIC) via the Brazilian Innovation Agency (FINEP). Research projects on the tower are funded by FAPESP and other state research funding agencies, such as FAPEAM (Amazonas) and FUNPAR (Paraná).

Two smaller towers, each of which is 80 m tall, are also located on the Uatumã Reserve. Used to study gases and aerosols, they afford a view closer to the canopy, whereas the ATTO stands high over the tops of the tallest trees, which do not exceed 40 m, or only an eighth of the observatory’s height.

As you climb the ATTO, you can feel the humidity rising from the forest diminish when you reach 40 m. At approximately 170 m, a strong wind blows, but the tower does not sway because it is anchored by long, high-strength steel cables. From the top, you see the immensity of the forest, usually accompanied by a vast silence. A few birds manage to settle on the tower’s summit; some leave mementos behind.

Amazonia plays a vital role in global greenhouse gas biogeochemical cycles. “The Amazon rainforest is extremely important, above all because it’s a unique biome in a tropical region. It’s the world’s largest tropical forest and the only place where the forest itself has mechanisms for controlling its internal climate while significantly influencing the planet,” said Paulo Artaxo, Full Professor at the University of São Paulo’s Physics Institute (IF-USP) and a member of the Intergovernmental Panel on Climate Change (IPCC).

Several characteristics of the Amazon rainforest explain how it regulates the region’s climate. “It controls the energy balance, the flow of latent and sensible heat, water vapor, and the cloud condensation nuclei that will intensify its hydrologic cycle. This is only possible for a very large area of unbroken forest. Fragmented forest lacks these properties,” Artaxo said.

Artaxo is a member of the steering committee for the FAPESP Research Program on Global Climate Change (RPGCC) and principal investigator for the research project “Aerosol and cloud life cycles in Amazonia”. Supported by FAPESP, the project aims to calculate aerosol transport from measurements obtained at the ATTO, on Chacaltaya – a 5,250 m mountain in the Bolivian Andes – and on ships and aircraft.

Artaxo was the principal investigator for the Green Ocean Amazon Experiment (GOAmazon), a scientific campaign that set out to understand how aerosol and cloud life cycles are influenced by the transport of pollutants from Manaus to parts of the Amazon rainforest. GOAmazon ran from 2013 to 2018 and was supported by FAPESP, the US Department of Energy (DoE), and FAPEAM.

Analysis of the data collected at the ATTO and other sites in Amazonia enabled GOAmazon to make important discoveries about the dynamics of the forest and its relationship with climate change. For example, researchers realized that the global warming process may be even more intense than originally forecast unless deforestation can be halted.

The researchers mathematically reproduced the planet’s current atmospheric conditions, including the levels of aerosols, anthropogenic and biogenic volatile organic compounds (VOCs), ozone, CO2, methane, and other factors that influence global temperature. According to the study, the heightened intensity of global warming was due mainly to emissions of biogenic VOCs from tropical forests.

Another study, published in Nature Communications, reinforced Amazon's importance in regulating atmospheric chemistry. Measurements made as part of GOAmazon showed that the rainforest emits at least three times more isoprene than scientists had previously thought. Isoprene is one of the main precursors of ozone in the Amazon.

A third study, published in the journal Science, showed how the presence in the atmosphere of ultrafine aerosol particles emitted by cities can intensify storm cloud formation and rainfall in the Amazon region. These particles are less than 50 nanometers in diameter, and scientists had previously thought them too small to play a significant role in regulating the region’s hydrologic cycle.

The results obtained in this study help researchers understand how urban pollution affects processes related to the development of thunderstorms in Amazonia.

“It’s a jigsaw puzzle, and we tried to precisely identify new pieces to see a more complete picture,” said Luciana Varanda, a professor at the Federal University of São Paulo (UNIFESP) and a participant in GOAmazon.

Varanda also conducts research in the Tapajós National Forest in Pará State and on the Cueiras Biological Reserve, located 60 km from Manaus. “We’re comparing observations at the ATTO and these other two sites, and the results are similar,” she said. “This suggests that although the reserve is closer to Manaus, it is well preserved and has the original conditions of primary forest.”

GOAmazon used advanced equipment installed in the towers. “The equipment runs automatically, collecting air samples for high-precision analysis of levels of CO2 and carbon monoxide, which are indicators of human activities,” Varanda said. “We also measure levels of ozone, an important pollutant in the troposphere, and we have equipment that thoroughly analyzes the physicochemical properties of the aerosols. These are real-time analyses of chemical composition and optical properties indicating the interaction of aerosols with solar radiation and forest photosynthesis.”

According to Artaxo, the towers were built at sites that receive a minimum of urban pollution. “Pollution from Manaus reaches the ATTO very sporadically – only one or two days a year. Most of the time, the tower receives one of the cleanest air masses on the planet, transported 2,000 km from the Tropical Atlantic over a region that contains no large urban areas at all. This makes the ATTO very valuable for monitoring atmospheric greenhouse gases, aerosol particles, clouds, radiation and so on,” he told Agência FAPESP.

Artaxo added that the importance of measurements of this kind in Amazonia is also highlighted by the ATTO’s uniqueness. There are only two comparable towers in the entire world. “The ZOTTO in Siberia, Russia, which is 302 m tall, and the WLEF tall tower in Wisconsin, in the Great Lakes region of North America, measure the carbon balance and atmospheric properties. The ATTO is the only tall tower observatory in a tropical region, which is strategic from the standpoint of carbon balance and global hydrology,” he said.

“The ATTO research group is large and well-integrated. More importantly, we do everything in the same location, so we exchange knowledge, data, analyses and research methods,” said Susan Trumbore, a researcher at the Max Planck Institute for Biogeochemistry (MPI-BGC) and coordinator of the German side of the project.

The goal is for each research venture to include an equal number of Brazilians and Germans. “In the future, we plan to open it up to scientists from other countries,” Trumbore said.

The research conducted in the Uatumã reserve covers vegetation physiology, meteorology, hydrology and greenhouse gases, among many other areas. “Collaboration by researchers is essential. For example, say we study aerosols and notice that the levels of a specific gas have changed. The first thing to do is to contact the colleagues who are measuring this particle. Then we analyze satellite data, wind data, and large-scale vegetation data. It’s important to be connected with different areas because the forest is a complex dynamic system,” said Stefan Wolff, a researcher affiliated with the Max Planck Institute for Chemistry (MPIC).

Another example of collaboration among researchers is the experiment supervised by Fernanda da Luz, who recently earned a master’s degree from INPA. Luz is a member of a research group who are studying the influence of plant and soil diversity on the molecular composition of the organic matter dissolved in soil. The experiment is part of a PhD project conducted by a researcher from MPI-BGC. Once a fortnight Luz collects water samples for organic carbon analysis at INPA’s hydrology laboratory.

Amazonia as a whole

Trumbore explained that to understand the complex interactions between the forest and the atmosphere it is also necessary to research the soil and vegetation. “In particular, my research doesn’t use the tower. It entails digging holes in the ground rather than climbing up to the platform,” she said.

The most positive part of the project for her is the endeavor to understand complex processes. “At the same time as we measure atmospheric fluxes, we have to understand the whys and wherefores, so we study the soil, the trees and leaves, the symbiotic relations in lichens, and many other things. I focus on the whys and wherefores. The reserve and science station also provide support for research on the vegetation,” she said.

Methane, an important greenhouse gas, is emitted by the soil and waterlogged areas. “Globally speaking, the Amazon basin is a major source of methane. We want to know how this will change as a result of climate change and global warming,” Trumbore said.

According to Artaxo, the ATTO needs to operate for a long period in order to produce a reliable diagnosis of what is happening to ecosystems in the Amazon. “Are they losing carbon to the atmosphere? Are they absorbing carbon? Is rainfall decreasing or increasing? These are key questions both in connection with the Paris Agreement, to which Brazil is a signatory, and to enable us to develop as soon as possible an accurate diagnosis of the current status of these ecosystems,” he said.

More than 70 million Brazilians may face water shortages by 2035

Microorganisms are the main emitters of carbon in Amazonian waters

Scientists simulate a black hole in a water tank

Social and environmental costs of hydropower are underestimated, study shows

Diversity and inclusivity ‘lacking’ in the water sector
END_OF_DOCUMENT_TOKEN_TO_BE_REPLACED