Temperature extremes with altered characteristics are among the most threatening impacts of global warming. However, how their characteristics have changed is uncertain, and varies by region.

A study led by Prof. Li Qiangzi from Aerospace Information Research Institute (AIR), Chinese Academy of Sciences (CAS), provides, for the first time, a panoramic view of global patterns and trends of temperature extreme events (TEEs) with both heat and cold extremes considered, of heat vs. cold extremes, and of compound TEEs.

The study was published in Communications Earth & Environment on April 1. 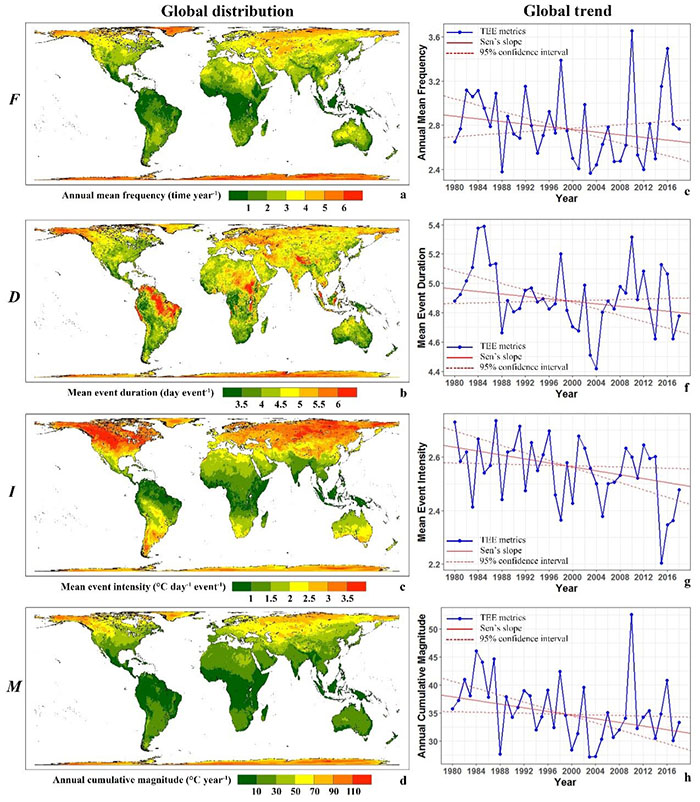 The team designed a comprehensive analytical framework to define and measure single and compound TEEs, and to analyze the spatio-temporal patterns and trends of their annual mean frequency, mean event duration, mean event intensity, and annual cumulative magnitude at grid cell, regional and global scales over the period 1980–2018.

Consequently, the world had transformed rapidly and steadily from a cold-extreme- to a heat-extreme-prevailing climate

Contrary to general belief, TEEs as a whole had become significantly milder globally with a decreasing rate of -1.63 degrees Celsius decade-1, due to the faster decrease in cold extremes compared to the increase of heat extremes. The compound percentage had marginally, yet significantly decreased by 0.87% per decade. 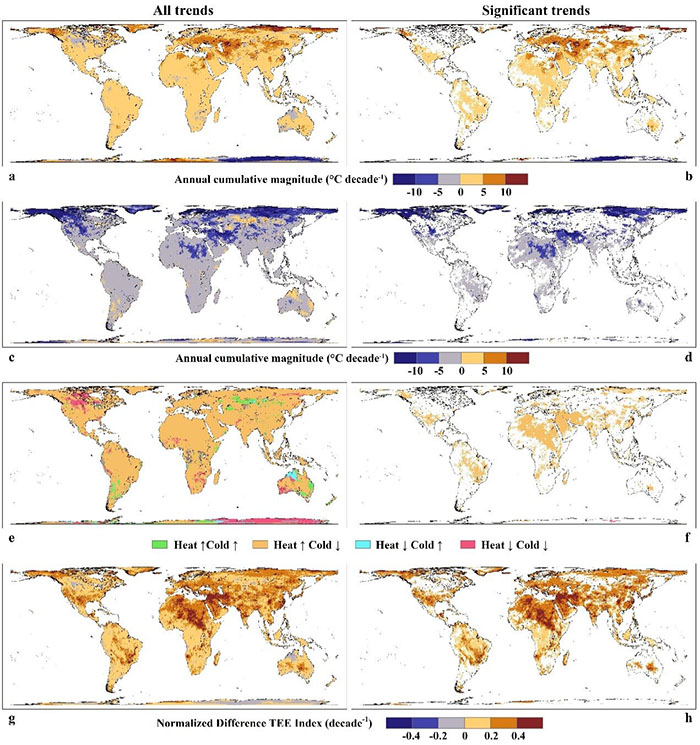 Overall, these trends were not globally uniform. The Middle East and North Africa, including the Mediterranean region, stood out as a hotspot of shift towards a heat-extreme-prevailing climate, with fast and significant heat extreme increase and cold extreme decrease. As a result of global heterogeneity, different patterns and trends were identified among climate zones, and the most noteworthy is in the Tropical and Polar zones.

The shift towards a heat-extreme-prevailing climate regime was the fastest in the Tropical zone, due to the fast percentage changes of both heat and cold extremes in magnitude.

The Tropical zone was also associated with the most rapid increase of compound TEE percentage. Unlike global trends, TEEs as a whole had become slightly more severe in the Tropical zone, though not significant. Conversely, TEEs had become significantly milder, and the climate regime shift was the slowest in the Polar zone due to the lowest percentage changes of heat and cold extremes.

The globally dominating trend of increasing heat extremes and decreasing cold extremes was the most uncommon in the Polar zone, with only 55% covered by such trends, in contrast to over 80% in other climate zones.

The enhanced understanding of global and regional TEE patterns and trends can provide new insights to support more oriented, effective and localized adaptation to climate change.