Both the American Rescue Plan Act (ARPA) and the Infrastructure Bill represent landmark moments in the U.S. infrastructure industry. Now, more than ever, industry professionals – whether Suppliers, Consultants, or Engineers – need to arm themselves with the right insights and context to engage public administrations in an effective and informed manner.

Citylitics is uniquely equipped to find the earliest trends from entities discussing and planning around both ARPA and the Infrastructure Bill with insights aggregated from council meeting minutes & agendas, capital plans, infrastructure plans, and permits from over 20,000 municipalities and 3,000 counties. This includes references to both articles of legislation, or ‘mentions’ in public documents and their surrounding context.

ARPA: ARPA was passed on March 11, 2021. It allocates $673 Billion to support state and local governments through the COVID-19 pandemic, with over $375 Billion of these funds assigned to infrastructure-related spending. 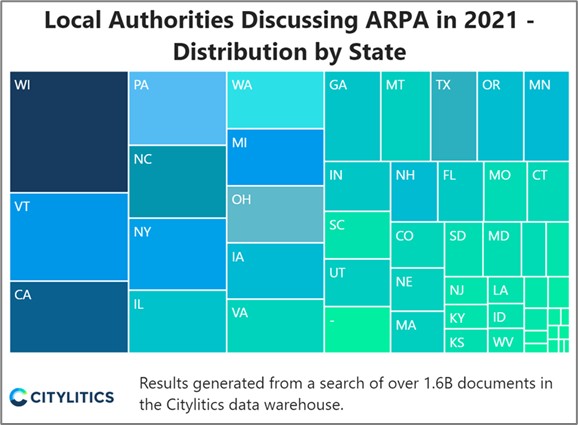 How is Funding Being Allocated by State and Local Government?

In most cases, the specific allocation of ARPA funds is being coordinated by state and regional authorities & planning bodies who are developing programs for the equitable and efficient allocation of these funds.

Funds are predominantly being channeled through existing funding and grant programs. This contrasts with the approach used to support ARPA.

Where are Conversations Taking Place?

Based on an analysis of 20,000+ municipalities and 3,000 counties, Citylitics has found that some local governments have formed committees to discuss ARPA and define their priorities for local infrastructure development. Many of these are seeking professional guidance to define their infrastructure needs and explore funding options. The State of Wisconsin has been one of the most effective in coordinating the distribution of ARPA funds, while Vermont, Pennsylvania, and California are additional states where ARPA is being discussed in relation to upcoming infrastructure priorities and opportunities. 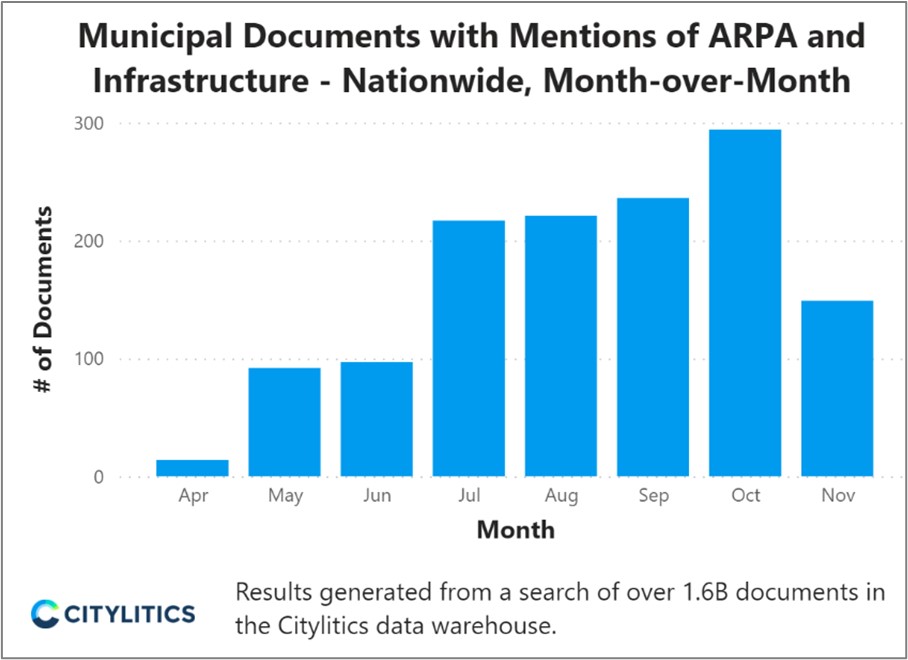 Municipal and local government documents indicate that funds are already being awarded, with some having been committed as early as April 2021. Of the $375 Billion in total funding for infrastructure, $225.5 Billion are assigned to the State and Local Fiscal Recovery Funds, both of which are to be expended before the end of 2024. Transportation funds will be distributed on an even shorter timeline, with the majority of funds awarded by January 2022.

While ARPA allocation and its creation of new funding structures appeared at the outset to be a complex and perhaps daunting undertaking, funding allocation has moved quickly and efficiently. Wisconsin, Vermont, Pennsylvania, and California are all states where funding is being actively discussed, with upcoming infrastructure opportunities expected.

Within the first two weeks of the Infrastructure Bill being passed, conversations in which the Bill was referenced, or ‘mentioned’, were already being had by towns, cities, and counties. Transportation and Transit Authorities and Commissions, such as the California High-Speed Rail Authority and Indiana Department of Transportation, have also been actively discussing the Bill. 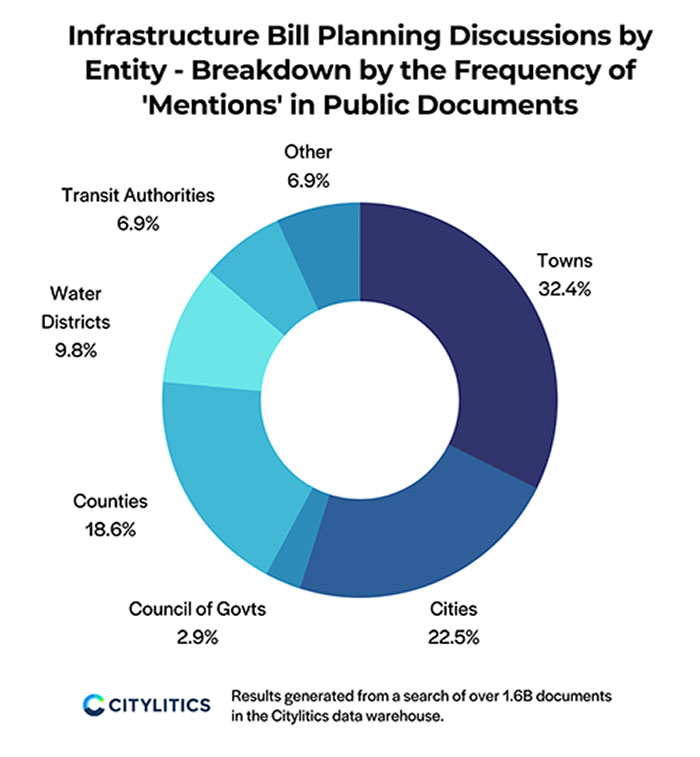 Regarding towns, New Jersey and Pennsylvania together are the largest count (23%), mirroring where funding has been allocated toward existing grants, especially in relation to the U.S. rail network. The Bill allocates $6 Billion for Northeast Corridor grants in support of procurement & deferred maintenance backlog with NJ Transit and the Southeast Pennsylvania Transportation Authority (SEPTA) the biggest transit agencies to gain. NJ Transit and the Delaware Valley Regional Planning Commission are likewise currently discussing the Bill. In terms of size, these towns and villages range from a population of 172 to 29,175.

Even before the Infrastructure Bill was passed, there was an overwhelming desire to know when and where funds will be allocated, how they will be allocated, and the types of infrastructure projects they can expect to see emerge over the next 5 years. Citylitics’ analysis shows that local governments are equally excited and already having key conversations on ways to move forward backlogged projects and meet more aspirational citizen needs and wants. Except for New Jersey and Pennsylvania, local governments appear focused on the ‘what ifs,’ making it a wise time for solution providers to begin reaching out and educating prospects on what that landscape of possibilities might look like.

What Projects are Being Prioritized?

Since ARPA allocates a majority of its infrastructure spending to “water, sewer, and broadband”, these have been the most prevalent topics of discussion among local and state governments, with water initiatives (29.22%) being discussed most frequently. ARPA’s emphasis on broadband has also led many local authorities to consider expansions to their existing telecommunications infrastructure, with nearly 20% if governments discussing such initiatives. 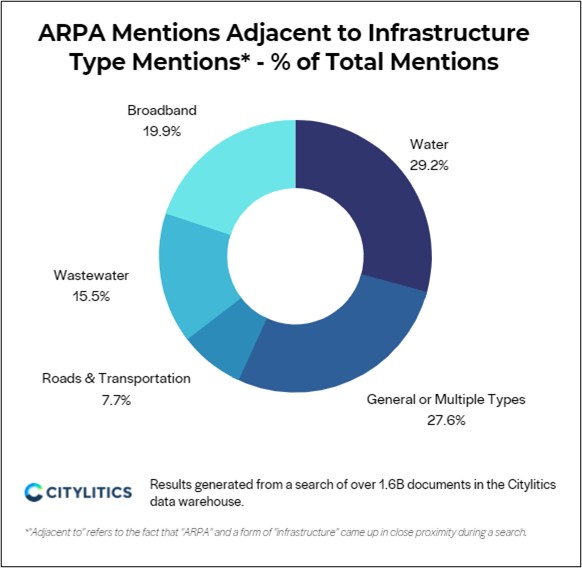 ARPA has paved the way for the emergence of new water infrastructure projects. Those in the water industry and operating in states such as Wisconsin listed above, may find that prospects are more interested in ambitious, net new projects, with less focus on cost and savings as in the past. Local entities are also very likely to be receptive toward broadband solutions at present.

Like ARPA, planning priorities arising from conversations about the Infrastructure Bill have naturally tended to focus on areas the Bill emphasises, such as roads, bridges, and other major projects ($110 Billion), passenger & freight rail ($66 Billion), and public transit ($39.2 Billion). 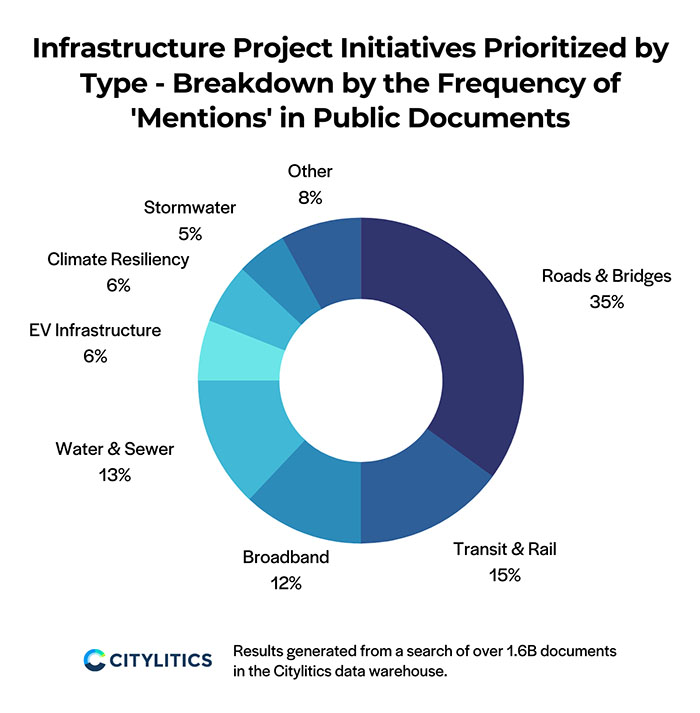 For companies that cover a breadth of industry segments – transportation, water, energy, etc. – Citylitics’ analysis indicates that roads, bridges, transit, and rail are key areas to allocate resources in preparation for upcoming projects, including strategic hires with expertise in those areas.

Industry professionals may also wish to consider municipality size when reaching out to prospects in the wake of the infrastructure bill, with an emphasis placed on repairs for smaller locals and aspirational topics such as climate resiliency for larger ones.

Based on an analysis of council meeting minutes & agendas, capital plans, infrastructure plans, and permits from over 20,000 municipalities and 3,000 counties, Citylitics has found that entities are actively discussing, and prioritizing infrastructure projects based on funding from ARPA and the Infrastructure Bill.

Project prioritization tends to mirror the areas of emphasis in both pieces of legislation, but with increased interest in broadband seen across the board. Size also plays a role, with smaller municipalities more interested in infrastructure projects related to financial insecurity (for example, repairing infrastructure and ensuring greater internet access), and larger municipalities focused on what might be considered more ambitious projects.

Where will we see infrastructure projects first begin to emerge? States such as Wisconsin, Vermont, Pennsylvania, and California have moved quickly to coordinate the allocation of ARPA funds and we expect to see a wealth of new infrastructure projects to emerge in 2022 and beyond. As it relates to the Infrastructure Bill, it is likely that we will see projects emerge first from towns, cities, and counties as opposed to water districts or authorities as they have shown the highest engagement levels around planning.

Citylitics’ analysis also underscores the immediacy surrounding funding and project planning. Local entities have been actively engaged in funding conversations from the start, including which projects they wish to pursue first. Now is the time for industry professionals to begin reaching out and helping to educate prospects on possibilities that come with an influx of funding. The analysis above also indicates areas where companies may wish to make strategic hires and allocate resources considering upcoming project opportunities. In an industry known for its long sales cycle and emphasis on educating prospects, there is no time now to lose. 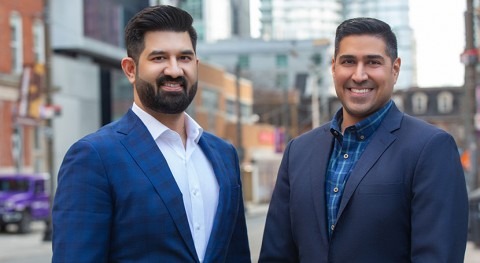 ACCIONA's Water Milestones 2022. Another Year Providing Water all over the world
END_OF_DOCUMENT_TOKEN_TO_BE_REPLACED