High, harmful concentrations of arsenic are found in aquifers all over the world, but the groundwater of the Bengal Basin, in the northeastern part of the Indian subcontinent, contains the most severe arsenic contamination. Naturally occurring arsenic is considered a carcinogen and has been linked to miscarriage and infant death, as well as cardiovascular disease and various cancers later in life.

Lamont-Doherty Earth Observatory research professor Lex van Geen has been studying arsenic contamination in drinking water for almost two decades. His earlier collaborations with colleagues in public health and economics urged rural Bangladeshis to use neighboring uncontaminated wells whenever possible. Both the government and individual households then began installing deeper wells, because in most areas only more shallow wells have contamination issues, for geological reasons. However, other studies also found high arsenic contamination in deeper wells in the southwestern Bengal Basin. This arsenic is naturally occurring — not released directly by human activities — and points to deficiencies in the current understanding of the basic mechanisms that regulate arsenic levels in groundwater.

Van Geen is co-author on a new study that explores the cause of arsenic found in deep aquifers in the Bengal Basin and suggests that instead of digging deeper wells to escape arsenic contamination, people in that area should be sharing wells that have been tested and proven to be safe from arsenic. The study is published in Geophysical Research Letters, and was conducted with hydrogeologists at the University of Dhaka in Bangladesh and Indian Institute of Technology Kharagpur in India, along with collaborators from several other U.S. institutions.

After first confirming the wells’ depths with a downhole camera and verifying that the high levels of arsenic were not due to faulty installations, the team dated the groundwater, mapped the regional geology, and modeled the groundwater flow pattern. The scientists found very few impermeable clay layers in this area. This indicates that high levels of arsenic in these deep wells are caused by shallow ground water flowing downward. Elsewhere in the basin, this downward flow is inhibited by silt and clay layers. 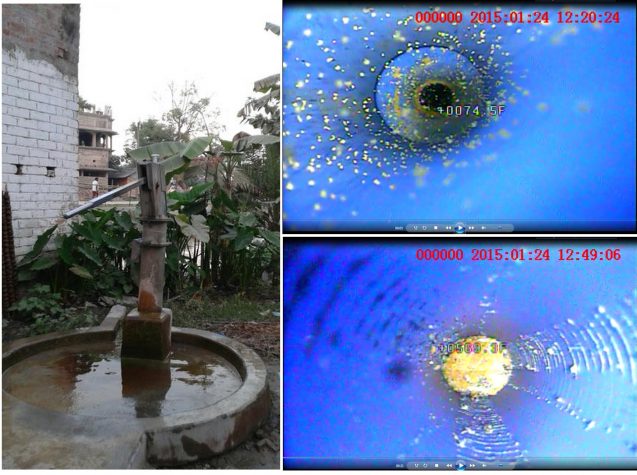 Left: A typical deep well in India. Right: Views from the camera that researchers put down the well’s pipe to confirm its depth. Image: Lex van Geen

However, it also turns out that less than one-fifth of the shallow wells in this particular part of the Bengal Basin actually contain high levels of arsenic. It is therefore unlikely that the arsenic in contaminated deep wells is coming from the shallow water itself. The more likely culprit is reactive carbon. This reactive carbon travels into the sediment with the downward flowing water and releases the naturally occurring arsenic found in the sand. All sand contains arsenic; however, it is not problematic until released into drinking water by some means, such as through a response to reactive carbon.

The source of this reactive carbon is still poorly understood. Lex van Geen explains, “Although many of us have been working on this for more than two decades, there is currently no clear answer.” Two possible theories, he added, are that the reactive carbon is created as plant matter breaks down underground, or that it is dissolved in the groundwater flowing downwards. Further studies are needed to find the origin of the reactive carbon causing a release of arsenic into aquifers.

Van Geen’s advice to the Bangladeshi government: “Forget about the deep aquifer in this particular area. Interventions should instead focus on installing shallow public wells and monitoring those, because a large proportion of those will be low in arsenic and suitable for consumption.”