Florida International University
As Miami's first and only public research university, offering bachelor's, master's, and doctoral degrees, FIU is worlds ahead in its service to the academic and local community.
TwitterFacebookYoutubeWeb

Several chemicals found in South Florida tap water and surface water belong to a concerning group of contaminants that can pose serious health risks to humans and wildlife.

FIU Institute of Environment scientists are among the first to measure the local distribution and level of these pollutants — known as perfluoroalkyl and polyfluoroalkyl (PFAS). The levels found were lower than standards set by the U.S. Environmental Protection Agency (EPA), however those limits do not factor in newer PFAS.

Around 30 different PFAS were found in Miami, Broward and Palm Beach tap water, with the highest concentrations detected in samples collected near the Miami International and Fort Lauderdale-Hollywood International airports. PFAS were also detected in Biscayne Bay and nearby tributary canals.

“We don’t want to cause alarm or freak people out,” FIU chemistry Assistant Professor Natalia Soares Quinete said. “Our goal is to provide the much-needed data on the current state of our water, so that people are aware of these contaminants and know where they are coming from.”

PFAS include thousands of different man-made chemicals, primarily used in industrial and consumer products. They are found in everything from fast food packaging, non-stick cookware, waterproof makeup, clothing, adhesives, firefighting foams and more. Known as “forever chemicals,” PFAS are problematic because they accumulate over time in the water, air, soil — and have even been found in human blood.

Because a human body can also accumulate PFAS, these chemicals are known to impact reproduction and human development, immune system functioning, interfere with the effectiveness of vaccines, as well as cause liver and kidney damage.

The U.S. phased out production of two especially harmful PFAS — PFOS and PFOA — after they were linked to adverse health effects. Additionally, the EPA set a health advisory level for tap water of 70 parts per trillion (ppt) for these two specific PFAS combined. While PFOA and PFOS levels in this study didn’t surpass the EPA’s limits, they were still in 97 percent of the drinking water samples.

Quinete points out the EPA’s health advisory limit doesn’t factor in the many other and newer PFAS still being used today. Many can be toxic in the tiniest amounts — as low as 1 part per trillion.

The most predominant PFAS in South Florida’s tap water was PFBA, which has been found in previous studies to accumulate in the lungs and affect the immune system. Currently, though, it’s only regulated in Minnesota.

In addition to testing drinking water, Quinete and students from her lab also collected water from Biscayne Bay and the neighboring canals. The average total amount of PFAS was 46.3 ppt. While the levels were not as high as in the drinking water, the bay is already facing other pollution problems and any amount of PFAS pollution is cause for concern.

“We need to create a full picture of all the types of contaminants that are in Biscayne Bay, especially the PFAS,” Quinete said. “These specific pollutants are capable of causing real damage, because they can affect the health of the animals, leading to neurological and development issues, and even interfering with reproduction.”

Quinete says more research is needed on the occurrence of PFAS in South Florida, especially since the findings raised more questions about the sources of PFAS in the drinking water and if they are present in the Everglades — one of the major sources of Florida aquifers, supplying drinking water for eight million Floridians.

As one of the few researchers in South Florida working with PFAS, Quinete will be investigating this question — and many more — to gather the data that’s needed to develop guidelines and procedures for controlling and reducing PFAS in Florida.

“PFAS have not been widely researched here and there’s only a few studies on their distribution and occurrence in South Florida,” Quinete said. “Our goal is to provide the information that’s needed to come up with possible solutions and new regulations to start to eliminate or remove them from our environment.”

Tropical mountain rivers are where the magic happens 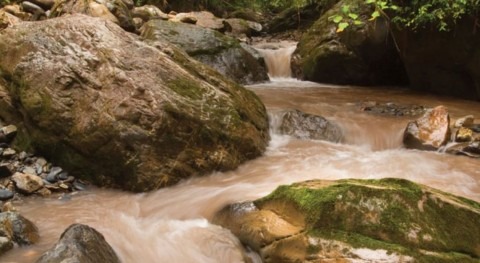