45-year-old Jason Cheong has been eagerly looking forward to the completion of the improvement works at Kallang River, from Bishan Road to Braddell Road for the past four years. A Bishan resident for 18 years, Jason saw how the old canal has been upgraded and transformed into a beautiful waterway with landscape enhancements that brings residents closer to the inviting waters. ​​

​​Upgrading works on the 1.8-kilometre stretch of the canal along Kallang River between Bishan Road and Braddell Road started in 2015 and took about 4 years to complete. The $86 million project undertaken by national water agency PUB saw the canal widen from 24 – 27 metres to 24 – 40 metres and deepen by 1 metre for an 800-metre section. Drainage capacity increased significantly by 80 per cent. These drainage improvement works were carried out to strengthen the structural integrity of the canal and boost flood protection for residents in the area.

At 10-kilometre, Kallang River is Singapore’s longest river, running from Lower Peirce Reservoir to Marina Reservoir. Since the ’90s, PUB has been progressively upgrading the drainage infrastructure at Kallang River to enhance its flood resilience and provide better flood protection.

PUB has also been carrying out island-wide drainage improvement works to progressively upgrade drains, with priority given to drains located in flood-prone areas and those that have reached or are reaching the end of their asset lives. This is in preparation for the possibility of more frequent and intense storms with climate change. ​​ 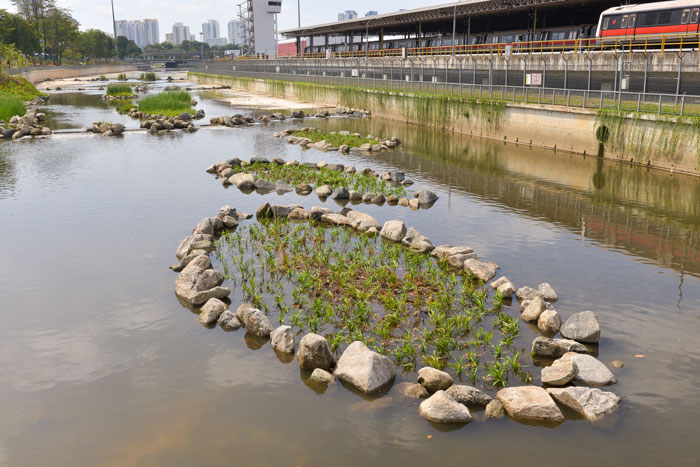 As part of the drainage improvement works, PUB also incorporated ABC Waters features along this stretch of Kallang River, including a meandering stream, water cascades, a naturalised river bank and a rain garden​1​ . A cantilevered community deck that extends over the river brings residents and park users closer to water.

PUB’s Director of Catchment & Waterways, Mr Yeo Keng Soon said, “This stretch of the Kallang River was built in the 1970s and has reached its structural lifespan. With the upgrading, it can now convey 80 percent more rainwater than before, providing better flood protection for residents to cater to potentially more frequent and intense rainfall events due to climate change. At the same time, we hope residents will help to keep our waterways clean and litter-free when they enjoy themselves along this spruced-up waterway.”

As part of the makeover, PUB also worked with NParks to co-develop the Kallang Linear Park along the river, between Bishan Stadium and Blk 165 Bishan Street 13. PUB is also constructing a cycling ramp over Kallang River, which will be completed by end of 2019. The ramp connects the Kallang Park Connector to the pedestrian overhead bridge and will form part of a seamless cycling route, taking cyclists from Bishan to downtown Singapore in the future.

Building a community of water lovers ​​

To encourage students and more of the community to explore, discover and learn about Singapore’s water management, bioengineering techniques and the heritage of major ABC Waters sites in a fun and engaging way, PUB and Nature Society (Singapore) (NSS) have co-created an ABC Waters Learning Trail @ Kallang River, which was officially launched at the opening ceremony. Interested participants can sign up for the trail with NSS.

Nature enthusiasts from Nature Photographic Society Singapore (NPSS) have also come forward to express their appreciation of the project through photography. They have documented some of the thriving biodiversity that can be found onsite and a selection of the best photographs were showcased at the opening event. The photos will be exhibited at Bishan Community Club after the event.

1​ Rain gardens are vegetated depressions to detain and cleanse stormwater runoff from roads, paths, green areas and building roofs etc. This runoff is filtered by the dense vegetation in the rain garden, as well as the specially designed soil layers beneath the rain garden surface. Sediments are trapped via this filtration process, while pollutants like nutrients are removed by plants and bacteria in the soil. The water that exits the rain garden to be discharged to the waterway is thus cleaner.

Without adaptation to climate change, 25% of global crop yields at risk
END_OF_DOCUMENT_TOKEN_TO_BE_REPLACED