General192
Rice University
Set in the heart of Houston, Texas, the nation’s fourth-largest city, Rice is a comprehensive research university that fosters diversity and an intellectual environment that produces the next generation of leaders and advances tomorrow’s thinking.
TwitterFacebookLinkedInYoutubeWeb

Cleaning pollutants from water with a defective filter sounds like a non-starter, but a recent study by chemical engineers at Rice University found that the right-sized defects helped a molecular sieve soak up more perfluorooctanesulfonic acid (PFOS) in less time.

In a study in the American Chemical Society journal ACS Sustainable Chemistry and Engineering, Rice University researchers Michael Wong, Chelsea Clark and colleagues showed that a highly porous, Swiss cheese-like nanomaterial called a metal-organic framework (MOF) was faster at soaking up PFOS from polluted water, and that it could hold more PFOS, when additional nanometer-sized holes (“defects”) were built into the MOF.

PFOS was used for decades in consumer products like stain-resistant fabrics and is the best-known member of a family of toxic chemicals called “per- and polyfluoroalkyl substances” (PFAS), which the Environmental Protection Agency (EPA) describes as “very persistent in the environment and in the human body — meaning they don’t break down and they can accumulate over time.”

By introducing defects into the structure of a metal-organic framework, or MOF, Rice University researchers found they could increase the amount of toxic pollutants called perfluorooctanesulfonic acid (PFOS) that the MOF could hold, as well as the speed with which it could adsorb them from heavily polluted industrial wastewater. Illustration courtesy of Chelsea Clark

Wong, professor and chair of Rice’s Department of Chemical and Biomolecular Engineering and a professor of chemistry, said, “We are taking a step in the right direction toward developing materials that can effectively treat industrial wastewaters in the parts-per-billion and parts-per-million level of total PFAS contamination, which is very difficult to do using current technologies like granular activated carbon or activated sludge-based systems.”

Wong said MOFs, three-dimensional structures that self-assemble when metal ions interact with organic molecules called linkers, seemed like good candidates for PFAS remediation because they are highly porous and have been used to absorb and hold significant amounts of specific target molecules in previous applications. Some MOFs, for example, have a surface area larger than a football field per gram, and more than 20,000 kinds of MOFs are documented. In addition, chemists can tune MOF properties — varying their structure, pore sizes and functions — by tinkering with the synthesis, or chemical recipe that produces them. 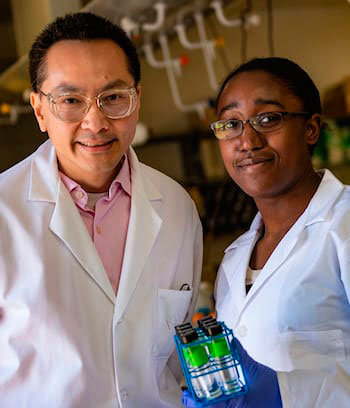 Such was the case with Rice’s PFAS sorbent. Clark, a graduate student in Wong’s Catalysis and Nanomaterials Laboratory, began with a well-characterized MOF called UiO-66, and conducted dozens of experiments to see how various concentrations of hydrochloric acid changed the properties of the final product. She found she could introduce structural defects of various sizes with the method — like making Swiss cheese with extra-big holes.

“The large-pore defects are essentially their own sites for PFOS adsorption via hydrophobic interactions,” Clark said. “They improve the adsorption behavior by increasing the space for the PFOS molecules.”

Clark tested variants of UiO-66 with different sizes and amounts of defects to determine which variety soaked up the most PFAS from heavily polluted water in the least amount of time.

“We believe that introducing random, large-pore defects while simultaneously maintaining the majority of the porous structure played a large role in improving the adsorption capacity of the MOF,” she said. “This also maintained the fast adsorption kinetics, which is very important for wastewater remediation applications where contact times are short.”

Wong said the study’s focus on industrial concentrations of PFAS sets it apart from most previously published work, which has focused on cleaning polluted drinking water to meet the current federal standards of 70 parts per trillion. While treatment technologies like activated carbon and ion exchange resins can be effective for cleaning low-level concentrations of PFAS from drinking water, they are far less effective for treating high-concentration industrial waste.

Although PFAS use has been heavily restricted by international treaty since 2009, the chemicals are still used in semiconductor manufacturing and chrome plating, where wastewater can contain as much as one gram of PFAS per liter of water, or about 14 billion times the current EPA limit for safe drinking water.

“In general for carbon-based materials and ion-exchange resins, there is a trade-off between adsorption capacity and adsorption rate as you increase the pore size of the material,” Wong said. “In other words, the more PFAS a material can soak up and trap, the longer it takes to fill up. In addition, carbon-based materials have been shown to be mostly ineffective at removing shorter-chain PFASs from wastewater.

“We found that our material combines high-capacity and fast-adsorption kinetics and also is effective for both long- and short-chain perfluoroalkyl sulfonates,” he said.

Wong said it’s difficult to beat carbon-based materials in terms of cost because activated carbon has been a mainstay for environmental filtration for decades.

“But it’s possible if MOFs become produced on a large-enough scale,” he said. “There are a few companies looking into commercial-scale production of UiO-66, which is one reason we chose to work with it in this study.”

Additional co-authors include Kimberly Heck and Camilah Powell, both of Rice. The research was supported by the National Science Foundation (NSF) Graduate Research Fellowship Program and by the NSF’s Nanosystems Engineering Research Center on Nanotechnology-Enabled Water Treatment (NEWT). Based at Rice, NEWT is a multi-institutional effort launched in 2015 to develop compact, mobile, off-grid water-treatment systems that can provide clean water to millions of people and make U.S. energy production more sustainable and cost-effective.