Could a drought in California be linked to a drought in the Midwest? A recent Stanford-led study published in Geophysical Research Letters finds that regions may fall victim to water scarcity like dominos toppling down a line.

“We know droughts can travel thousands of miles across continents, but it has not been clear exactly how,” said lead author Julio E. Herrera Estrada, a postdoctoral scholar with the Stanford Water in the West program and the Stanford Department of Earth System Science.

Droughts occur when a lack of precipitation causes a water shortage. Continents receive most of their precipitation from water vapor transported by wind from other land and ocean areas as well as from moisture that evaporates from a region and falls in the same area – a process known as recycling.

In this study, researchers looked at how decreased moisture from recycling and transport amplified the 2012 drought in the Midwest, which resulted in losses of over $33 billion. Using a complex, mathematical, moisture tracking model combined with state-of-the-art data on precipitation, evaporation and moisture fluxes in the atmosphere, they found that reduced precipitation from recycling and transport from upwind land areas made up 62 percent of the total precipitation deficit experienced by the Midwest. Diminishing moisture transported directly from oceans made up only 38 percent of this deficit. 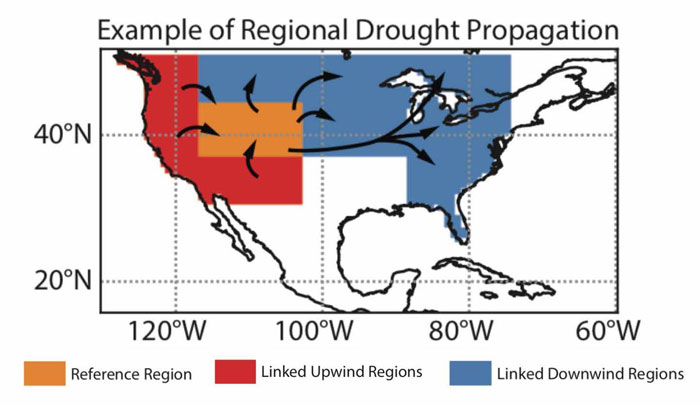 An example from the study of upwind and downwind regions in North America between which droughts have propagated through reduced moisture transport.

Like most of the U.S., the Midwest relies on moisture imported from other regions. When a drought occurred in the western U.S. that same year, it resulted in less evaporation and drier air. Transported by wind, this drier air likely resulted in less rainfall over the Midwest, according to the researchers. As less moisture arrived in the Midwest, precipitation recycling shut down, further intensifying the drought. This sequence can reinforce itself and lead to new or more severe droughts. The study found that the Midwest eventually recovered from drought when more moisture was imported directly from the ocean, restarting the precipitation recycling process in the region.

“We show that multiple droughts over a continent may not necessarily be a coincidence,” said Herrera Estrada. “There may be important feedbacks between and within land areas that can propagate and intensify droughts, helping them travel across continents.”

As the U.S. faces more intense climactic events, understanding how droughts form and move will be increasingly important. While there is still a great deal to be learned, it is imperative for water managers and policymakers to prepare for future droughts. Being able to better predict where and when droughts occur and how long they last will be key. To slow the potential domino effect of droughts, the researchers urge the adoption of sustainable land management practices to prevent soil erosion and degradation and recommend preventing deforestation and desertification. These practices ensure more vegetation and better soil which will help keep up the supply of moisture for recycling and to be exported to regions downwind.

“It will also be crucial to take a regional approach to drought risk management and facilitate coordination between upwind and downwind communities to reduce the severity and impacts of future droughts,” concluded Herrera Estrada. “In many instances, this will require international cooperation.”

This paper was co-authored by J. Alejandro Martinez, Adjunct Instructor at the Escuela Ambiental, Universidad de Antioquia in Colombia; Francina Dominguez, Associate Professor and Richard and Margaret Romano Professional Scholar at the Department of Atmospheric Sciences, University of Illinois at Urbana-Champaign; Kristen L. Findell, Research Physical Scientist at the Geophysical Fluid Dynamic Laboratory; Eric F. Wood, Susan Dod Brown Professor of Civil and Environmental Engineering at Princeton University; and Justin Sheffield Professor of Hydrology and Remote Sensing at the University of Southampton in the United Kingdom.

H2Open – A case for change in the water sector
END_OF_DOCUMENT_TOKEN_TO_BE_REPLACED