Perfluoroalkyl and polyfluoroalkyl substances (PFAS) have been manufactured and used in a variety of products and applications in the U.S. since the 1940s, such as commercial household products, firefighting agents and food packaging. According to the U.S. Environmental Protection Agency (EPA), PFAS are very persistent in the environment and in the human body – meaning they don't break down and can accumulate over time.

Texas Tech University's Jennifer Guelfo, an assistant professor in the Department of Civil, Environmental & Construction Engineering through the Edward E. Whitacre Jr. College of Engineering, is the co-principal investigator (P.I.) on a $394,500 project with the Minnesota Pollution Control Agency to study PFAS in land-applied biosolids.

“We're studying the occurrence, fate and transport of PFAS in biosolids, which are a byproduct of the wastewater treatment process,” Guelfo said. “After you treat wastewater, you have effluent – liquid waste or sewage – that you discharge. Then the solid fraction, sometimes referred to as biosolids or sludge, has properties such as nutrient content that are beneficial for application in an agricultural setting. It also has some of the other compounds that are introduced to the wastewater treatment plant through the influent. Those compounds include PFAS."

Guelfo said there are numerous reasons to try to better understand PFAS.

“There are a lot of questions about the occurrence of PFAS in biosolids and where they go once you take these biosolids and apply them in an agricultural setting,” she said. “The reason we care is because there's been a lot of scrutiny in recent years on some members of the PFAS family of compounds, specifically perfluorooctanoic acid (PFOA) and perfluorooctane sulfonate (PFOS). Several states have regulatory limits for PFOS and PFOA in drinking water, and the EPA is in the process of implementing federal drinking water regulations for these PFAS as well.

“Those regulated concentrations are trending toward pretty low limits. One of the concerns with PFAS in land-applied biosolids is whether they can migrate down from surface soils and impact  groundwater that might be used for drinking water at levels that exceed these limits.”

“The project will look at that,” Guelfo said. “It'll look at which PFAS occur in biosolids, the potential for PFAS to migrate to the saturated zone after biosolids application, and it'll also look at uptake of PFAS from biosolids-amended soils into plants.”

The project is being led by Summer Streets at MPCA. Carl Rosen, a professor and the department head of soil, water and climate at the University of Minnesota, also is a co-P.I.

“Carl will do the part of the study that focuses on the field,” Guelfo said. “He'll oversee biosolids application, plant crops in biosolids-amended fields and do all the fieldwork associated with growing and collecting crop samples. He'll also install some instrumentation at these field sites that will collect, for example, the water that migrates through the subsurface from the biosolids-amended soils.

“Then, he will send all those samples to us at Texas Tech. We will analyze them using high-resolution mass spectrometry. At the same time Carl is doing that field component, we will have a lab component that studies PFAS leaching from biosolids-amended soils in a more controlled laboratory environment.” 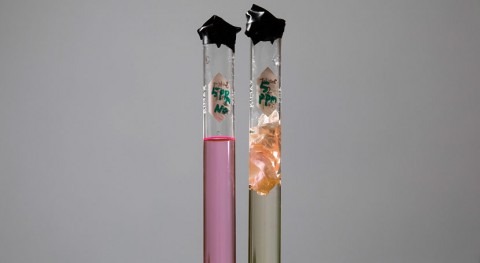