Without adaptation to climate change, 25% of global crop yields at risk

Shifts in weather patterns induced by climate change will increase extreme heat and reduce rainfall across major crop growing regions. Will this trigger a decline in the supply of calories needed to sustain the world’s growing population?

According to a study published in the Journal of Environmental Economics and Management, global calorie supplies are subject to continuing or even increasing vulnerability to climate change.

Climate change could reduce global crop yields by 10% by mid-century and 25% by century’s end, under a vigorous warming scenario, if farmers cannot adapt better than they did historically. 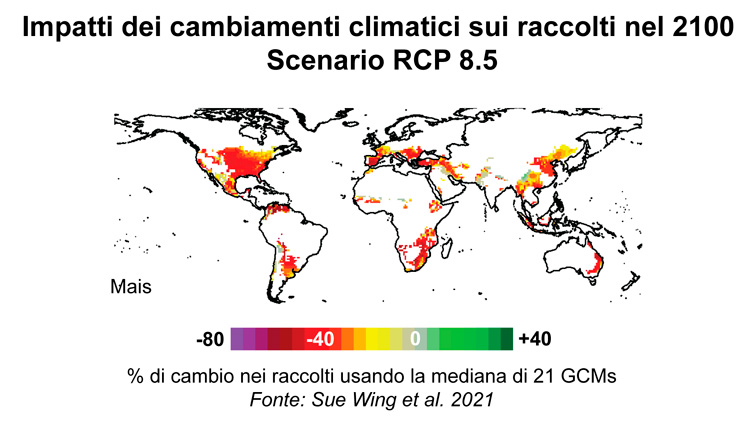 To quantify this, a team of researchers from Boston University, Ca’ Foscari University of Venice and the Euro-Mediterranean Center on Climate Change (CMCC) coupled their statistical models trained on past data with forecasts of future temperature and rainfall from 21 high-resolution Global Climate Models (GCMs) simulations to project how yields might change in response to shifting weather patterns.

“Farmers’ capacity to adapt, even over longer periods, might be limited,” explains Professor Ian Sue Wing from Boston University, lead author of the study. “Even in the United States, the world’s agricultural technology frontier, farmers have been able to only slightly compensate for the adverse impacts of extreme heat on yields of maize and soybeans over time frames of decades.”

Enrica De Cian, professor at Ca’ Foscari University and researcher at Cmcc, adds: “We asked ourselves: If difficulties to adapt are observed in the US, what can we then expect for food producers in the tropics, where 40% of the world’s population lives and high temperature extremes are projected to rise more than in the major calorie crop growing regions of the US?

The study sheds new light on this question. The authors analyse the worldwide vulnerability of four crops (maize, rice, soybean and wheat),which are responsible for 75% of global calorie intake, to future shifts in temperature and rainfall patterns caused by climate change. 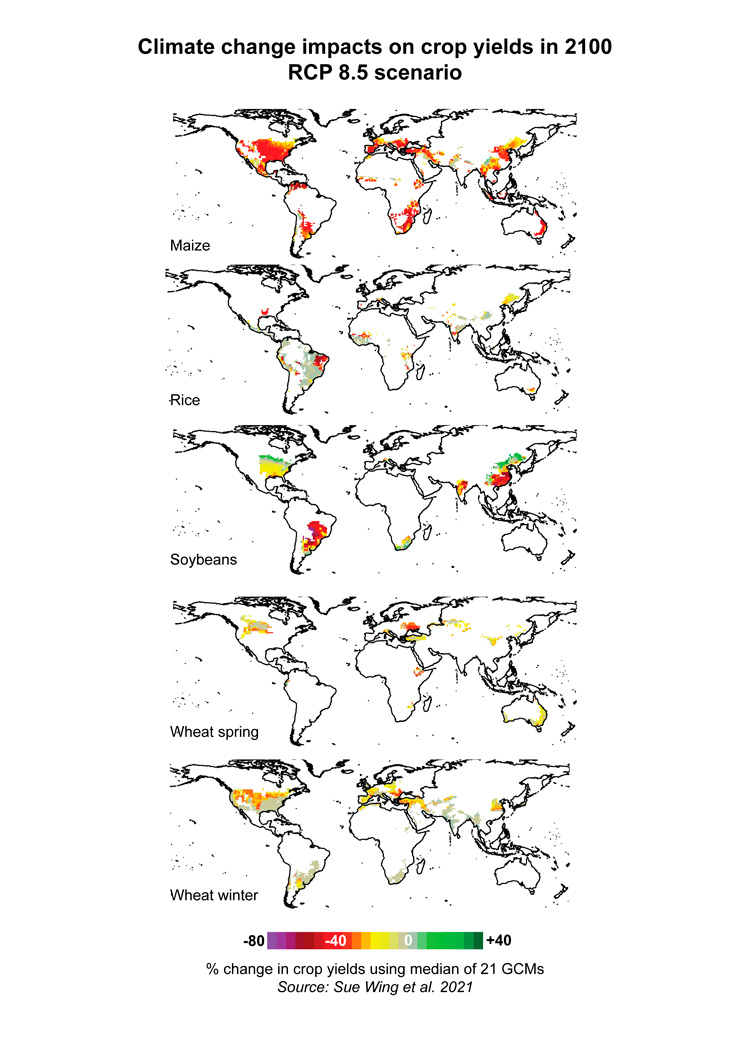 “We used statistical models trained on large global gridded datasets of historical crop yields, temperature and rainfall, to separate changes in yield responses to heat and moisture exposure over their crop-specific growing seasons into two types of adaptation," explains Malcolm Mistry, postdoc at Ca’ Foscari University of Venice. "On one hand, farmers’ short-run response to unanticipated weather shocks, and, on the other hand, long-run adjustments over decades.”

While farmers have limited options to adjust to weather changes in the short run—for example, by changing the quantity of fertilizer or irrigation water applied to their crop - over long time frames it is possible for them to undertake substantial adaptation by changing in crop varieties, shifting planting and harvesting dates, adopting new farming technologies, and investing in more or different agricultural machinery. In principle, long-run adjustments have the potential to compensate for the effects of adverse weather on yields.

The question posed by the research is: did farmers actually fulfill that potential?

“Surprisingly, at the global scale and in most world regions, the answer is no,” Professor Enrica De Cian states. “Our results showed that adverse impacts of extreme hot or dry days on the productivity of the crops from which we derive food calories persisted over decades, in line with the earlier findings for the US. Even worse, these negative long-run effects were sometimes larger than the impacts on yield that occurred due to transitory weather shocks.”

“The implication is that global calorie supplies are subject to continuing or even increasing vulnerability to climate change - Professor Ian Sue Wing concludes -. Now, we plan to build on these findings to investigate how irrigation investments and shifting cultivation over space can help offset the impacts of adverse climatic changes”.

The study in the Journal of Environmental Economics and Management was published with financial support from the United States Department of Energy and from the People Programme Marie Curie Actions of the European Union (FP7/2007-2013).