Introduction of non-native lake trout in Yellowstone Lake has affected organisms from the microscopic level in the lake to large animals in the region, according to newly published research.

Zooplankton, cutthroat trout, river otters, osprey, bald eagles, bears and, likely, elk are among the creatures whose numbers, diet and behavior have been altered as a result of the presence of the invasive fish, says an article in the scientific journal Science Advances.

The scientists analyzed data spanning more than four decades, from 1972-2017, and concluded that the impact of lake trout in Yellowstone Lake -- in particular, the decline of native cutthroat trout -- has cascaded across the lake, its tributaries and the surrounding ecosystem. 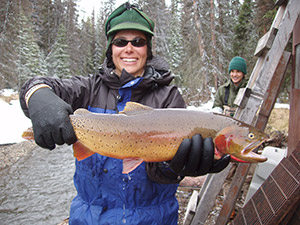 UW researcher Lusha Tronstad holds a large cutthroat trout captured in Clear Creek, a tributary stream of Yellowstone Lake, when she was a Ph.D. student in spring 2005. The numbers of spawning cutthroats in the lake’s tributaries have increased in recent years as a result of efforts to reduce the numbers of lake trout, whose presence has affected a number of other species in the Yellowstone Lake ecosystem since they were illegally introduced in the 1980s. (Lusha Alzner Photo)

Monitoring over the past three decades has shown a dramatic drop in the numbers of native cutthroat trout that inhabit Yellowstone Lake and spawn in its tributaries, largely as a result of the illegal introduction in the 1980s of lake trout -- which prey on cutthroats and spawn at depths inaccessible to bears, birds and other animals.

As a result, according to the new paper:

-- The size of zooplankton in the lake increased, as fewer cutthroat trout were there to consume them. That has brought about an increase in the lake’s water clarity, a likely factor in a slight rise in the lake’s surface water temperature during summer.

-- Fewer spawning cutthroat trout in tributary streams reduced the transport of nutrients such as ammonium into those streams.

-- The density and success of osprey greatly declined, as they’re unable to prey on lake trout, which live at inaccessible depths. In fact, while there were an average of 38 osprey nests at Yellowstone Lake from 1987-1991, only three were observed from 2013-17. And those birds have been leaving the lake to forage in large lakes of the upper Snake River, at least five miles away.

-- Bald eagles shifted their diet to compensate for the loss of cutthroat trout. Even with that shift in diet, the average number of bald eagle nests on Yellowstone Lake dropped from 11 in 2004-08 to eight in 2013-17. And nesting success dropped from 56 percent in 1985-89 to zero in 2009, before rebounding to 70 percent during 2013-17 as the eagles found alternative food sources.

-- Otters, which relied on cutthroat trout as a primary food source, have shifted their diets to longnose suckers and amphibians. While there are no estimates on otter numbers in Yellowstone Lake and its tributaries before the introduction of lake trout, the estimate in 2008 -- one otter for every eight miles of shoreline -- is among the lowest ever reported for a river otter population.

“Grizzly and black bear frequency of occurrence on spawning tributaries and use of cutthroat trout as a food resource were greatly reduced following the lake trout invasion. However, this was localized displacement, and their populations were not otherwise affected, because only bears with home ranges neighboring Yellowstone Lake lost spawning cutthroat trout as a food resource,” the researchers wrote. “Since bears are omnivore generalists, they could make use of other foods.”

Those “other foods” likely include elk calves. Each spring, thousands of elk that winter on lands at lower elevations migrate to the interior of Yellowstone, and elk calves born in the Yellowstone Lake area are vulnerable to predation, especially during the first few weeks after birth.

“By 2007-2009, grizzly bears had shifted to alternative prey, and the proportion of cutthroat trout in their diet had declined to zero,” the researchers wrote. “Elk then accounted for 84 percent of all ungulates consumed by bears in the Yellowstone Lake area, suggesting lake trout had some level of indirect, negative impact on migratory elk using this area when spawning cutthroat trout were rare.”

The researchers say the reintroduction of wolves to Yellowstone starting in 1995 -- the year following the discovery of lake trout in Yellowstone Lake -- did not play a role in the shift in diet for bears in the Yellowstone Lake area. While grizzlies prey upon elk calves primarily during the first few days after birth, wolves and other predators kill elk calves later in the summer and winter.

The scientists also discount the idea that Yellowstone’s massive 1988 wildfires are responsible for the cutthroat trout decline.

“We do not attribute significant loss of cutthroat trout to wildfires because recruitment of young cutthroat trout from spawning streams, the process most likely to be impacted by wildfire, remained strong for more than a decade following 1988,” they wrote. “Cutthroat trout recruitment then severely declined, concurrent with lake trout population growth. In addition, if wildfires were to have negatively impacted bears, bald eagles, ospreys or other cutthroat trout consumers, then those impacts would also have been documented elsewhere, outside of the Yellowstone Lake ecosystem, which has not been the case.”

The scientists noted that extensive gill-netting of lake trout over the past 24 years has begun to help the cutthroat trout population in Yellowstone Lake.

“Juveniles are again recruiting to the cutthroat trout population. After being absent for many years, spawning adult cutthroat trout are returning to some of the smaller tributaries, and bear use of these streams has increased as a result,” they wrote. “Ospreys, however, have not yet responded to the recent increases in cutthroat trout prey. The outcome of restoration efforts to trophic levels with and across ecosystems in the Yellowstone Lake watershed remains uncertain.”