Ayacucho, the capital of the region with that same name, is located in the Peruvian Andean Central Highlands. Ayacucho was declared “Capital of Peruvian Popular Art and Handicrafts” by the Peruvian government because of the artisans that keep alive the pottery tradition of the ancient Wari, a culture prior to the Incas, with extraordinary altarpieces and an unlimited number of colonial churches and mansions. The plains of the city, which attracts an increasing number of tourists, is where the decisive Battle of Ayacucho took place, the last great confrontation of the Spanish-American independence wars (1809-1826), which resulted in the end of the Spanish colonial dominance in South America.

But in the last few months, Ayacucho has made the news not for its cultural attraction, but for being a sad example of the menace of climate change in the Andean region: severe droughts alternate with heavy flooding. The last episode of this terrible two-sided coin is very recent. At the end of 2016, the sustained drought triggered the alarms when the Cuchoquesera reservoir reached a capacity of 2% (2.5 million m3 out of the 80 million it is able to store), alerting the government and international organizations to a probable humanitarian disaster. However, rain started falling in the first four months of 2017, but rainfall was so heavy that it had the opposite effect: 114 Peruvians died and over one million lost their homes due to flooding, most of them in Ayacucho. Climatologists showed these phenomena were a consequence of climate change linked to a particularly intense El Niño phenomenon. 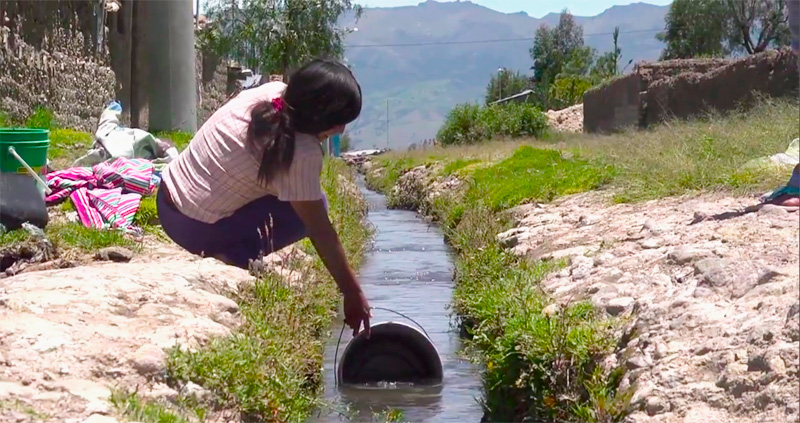 All this happens in a region with serious deficiencies in the access to water and sanitation, such as in the Yanama community described in the short film. Yanama is a 15-minute drive away from Ayacucho, but over there its inhabitants have an unhealthy ditch as their only source of water. Women go to the ditch in the early morning, collect water in buckets, filter and boil it before drinking, washing themselves and cooking with it. All mothers, like Carmen Talavera, protagonist of the short film, need to prevent their children from drinking water directly from the ditch, something that is not always possible, and therefore diarrhea and waterborne parasite diseases are endemic in Yanama. 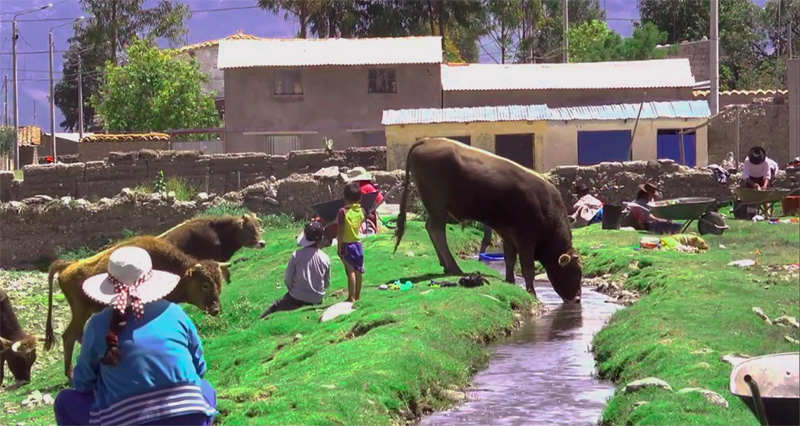 Children are the most affected ones. According to UNICEF, Ayacucho is the third poorest department in Peru. 44% of the boys, girls and teenagers live in rural areas and 73% live in poverty. In many areas of the region, the access to drinking water only reaches 23% of the population: regarding sanitation, the problem is greater, as in some villages of Ayacucho only 18% of their inhabitants have access to this human right essential for hygiene and a dignified life.

Childhood diarrhea is the worst consequence of this situation. Each year 4 billion cases of diarrhea occur in the world and 1.8 million people die due to this disease. More than 90% (1.6 million) are boys and girls under the age of 5. Likewise, when these children suffer repeated episodes of diarrhea they are more vulnerable to the malnutrition caused by the loss of fluids and electrolytes from the body.

The children from Yanama are an unbearable example of this situation. As Santiago Leiva, a healthcare technician in the Andean town, points out in the short film, the insalubrity of water makes children ill and impedes the sterilization of medical equipment. Contaminated water also causes diseases due to the lack of hygiene, such as scabies or other infectious diseases that affect children in the town.

The Peruvian government assumes that 17 regions of the country have a water deficit and it has set the goal of reaching a 100% coverage of drinking water and sanitation by 2021. In a country with around 50 operators with a very low efficiency rate and where the loss of reserves due to climate change becomes more evident (a notable decrease of Andean ice and of the level of aquifers) this goal is significantly ambitious. But this determined political action of support to the government of the rural areas in order to finance access projects and to promote education is a powerful asset to attain it.