Who can be left behind?

We Are Water Foundation
We are a non-profit organisation, set up in 2010 with the aim of contributing to the resolution of problems derived from the lack of water and sanitation in the world.
TwitterFacebookYoutubeWeb
· 21
1

Those who are invisible in the censuses, discriminated women, the inhabitants of the most vulnerable slums, all those ruined by droughts, those surrounded by polluted water, those on the other side of the technological barrier and those with no access to education on hygiene; all these population groups risk being excluded of the attainment of the Human Right to Water and Sanitation. 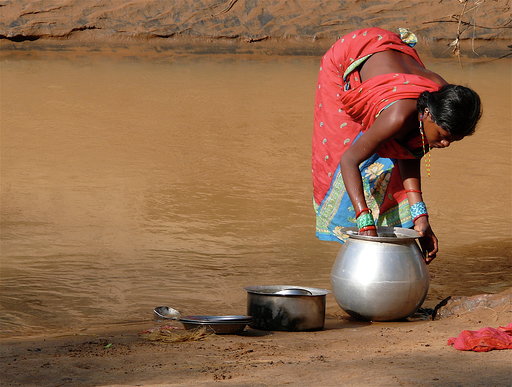 “Leaving no one behind” is a huge challenge, as many are already behind in the race for human dignity and development: over 2.1 billion people do not have access to clean water and 2.4 billion lack adequate sanitation.

The slogan of World Water Day this year takes up the idea and the spirit of the 2030 Agenda for Sustainable Development. It is the roadmap that must guarantee an efficient and fair global development for everyone. It also needs to put a stop to environmental degradation, a factor that has proven to be one of the most serious threats to the economically weakest in the last few years.

Among those who are already behind, some are at greater risk of not achieving the Sustainable Development Goals (SDGs) defined in the Agenda and especially number 6: the full attainment of the Human Right to Water and Sanitation. Who is already lagging behind?

The invisible ones, those no one knows that exist 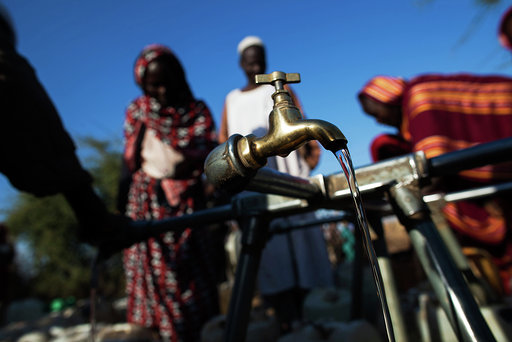 Internally Displaced Persons (IDPs) at the Nifasha Camp in North Darfur, have access to water only two hours in the morning, not enough time for all to be fully provided. The last drops of the morning coming out of a tap at a water access point in the camp.UN Photo/Albert González Farran

In 2009 a report set off the alarms of the auditors of the Millennium Development Goals for 2015. Where every drop counts: tackling rural Africa’s water crisis, published by the International Institute for Environment and Development, pointed out that around 50,000 water sources installed in Africa did not work and therefore millions of people, theoretically listed as supplied, remained on the dark side of statistics.

After contrasting with other NGOs, in 2014 the Human Rights Council recognized that the data managed so far underestimated the number of people with no affordable access to drinking water and safe sanitation. Furthermore, the absence of reliable censuses in the most neglected areas suggest that these “invisible” may be many more than initially believed. All of them are beyond the control of the institutions in charge and if we do not see them we cannot help them.

There have been advances in statistic accuracy but much remains to be done. Among these unregistered groups, women and girls are even more marginalized. In some African countries, for instance, statistics are sexist; they do not count women who give birth before they are 15, as they are not considered to be of reproductive age. The role of women in agriculture and household care as well as the hours spent fetching water are not taken into account either. 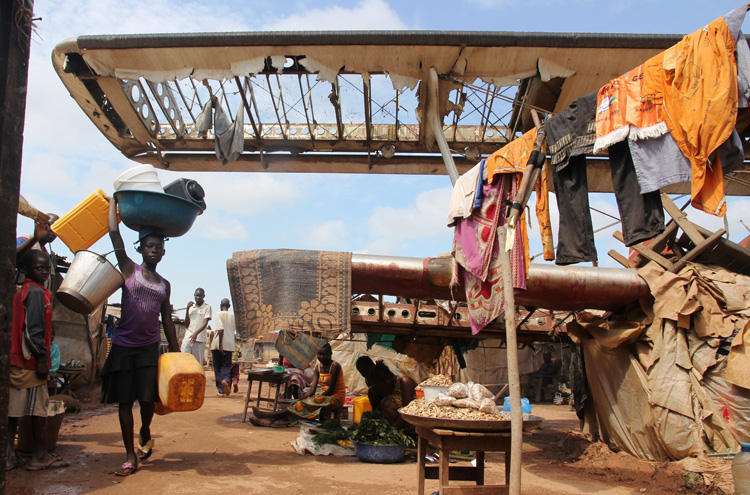 Other groups may not be invisible to statistics but they are invisible to oblivion: the 68.5 million displaced people who live in  Sahel, Lebanon and in many other areas around the world. According to UNHCR, 44,000 people are forced to flee their homes every day. The first thing all of them need to survive is water and in their settlements, mostly informal and in areas with hydric stress, they make an already difficult situation worse.

Around 12 million hectares of land are destroyed all around the world every year. According to FAO, 70 percent of the 5.2 billion hectares of dry land used in agriculture are already degraded. There are many causes, but the most frequent is deforestation; the overexploitation of aquifers and monoculture have completed the fatal impoverishment of the soil. This threatens the survival of around 1 billion people in over 100 countries, who depend on the health of the land for their livelihoods and who are usually the poorest in the planet. Desertification is an anthropogenic phenomenon that climate change is accelerating. 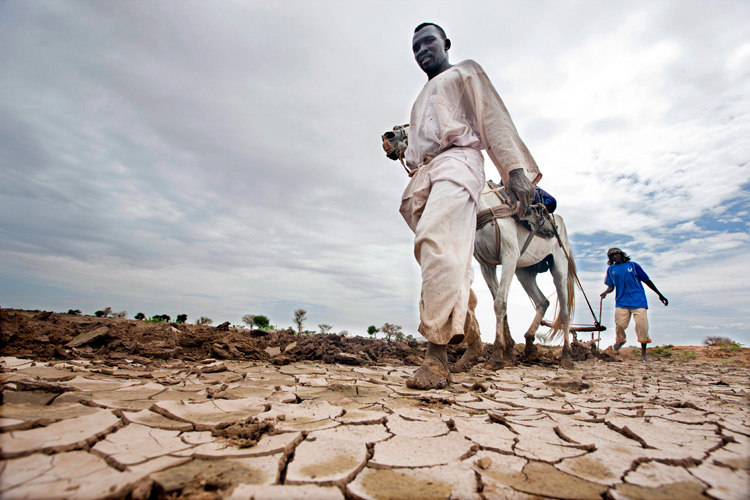 The subtropical areas of Africa and India are the most affected by this process. However, the phenomenon can be found all around the globe: 30% of the land in the United States experiences some kind of degradation, 25% of Latin America is desert-like or semiarid; in Europe, Spain is the country showing the most evident threat, as a fifth of its land is in danger of becoming a desert; in China, almost 700,000 hectares of farming land, 2.35 million hectares of pasture and 6.4 million hectares of forest and bush areas have been lost since the 1950s.

It is essential to develop systems that regenerate aquifers and allow a diversification of crops, such as the project finalized by the We Are Water Foundation in Anantapur, India in 2011 in collaboration with Fundacion Vicente Ferrer: the construction of a reservoir in Ganjikunta. There, in an area menaced by desertification and subject to the climatic whim of monsoons, the collection of rainwater using small reservoirs allows farmers to diversify their crops, to provide water in the long drought periods and to recover aquifers by filtering, bringing water to the wells in the area and improving reforestation.

Another project of the Foundation that shows how to find solutions in communities threatened by the degradation of fertile soil is the retrieval of the water cycle in Bosawas, in Nicaragua, in collaboration with Educo. Education is one of the fundamental pillars for the recovery of traditional farming and livestock techniques so as to achieve the sustainability of the economic activity.

The inhabitants of slums 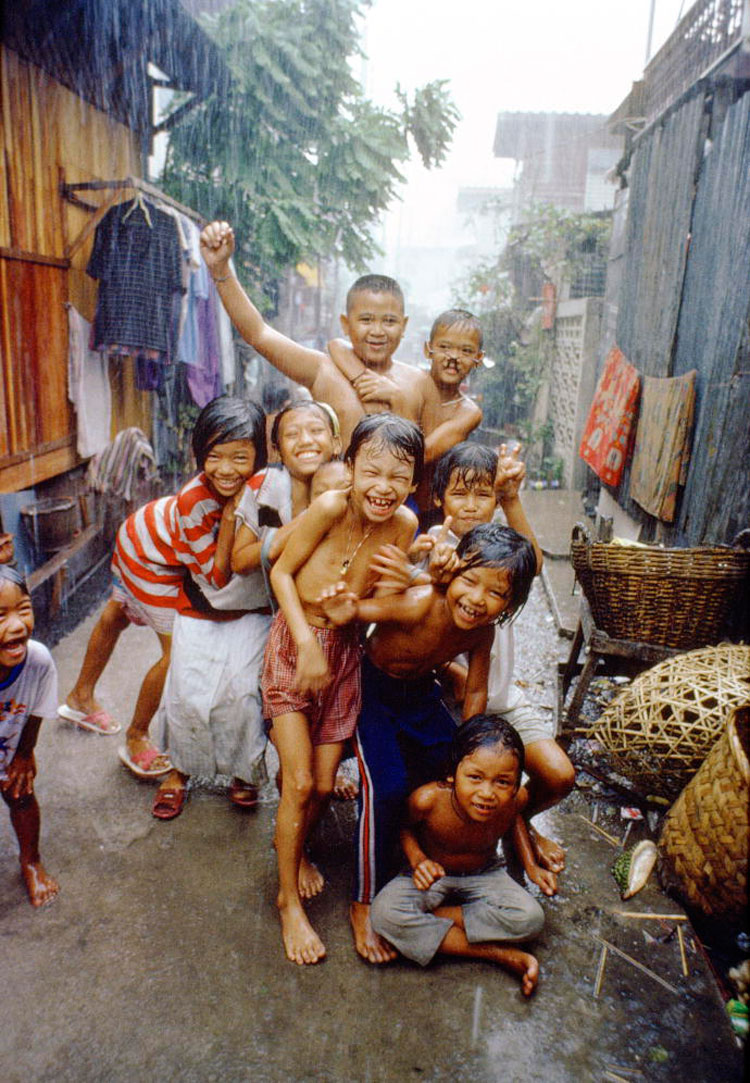 Poverty-stricken, the degradation of the land ends up ruining the farmers who are obliged to migrate to survive. The often end up crammed into slums in big cities, where they lose their roots and dignity.

The migratory pressure to cities in developing countries, where the urban water cycle is already deficient, causes a situation of collapse that is difficult to solve. According to World Bank forecasts, by 2050 at least two out of three people will live in increasingly larger cities. And the last projections indicate that at the end of this century 11.2 billion people will live on Earth, of whom 85%-90% will live in cities, so mankind will have practically become an urban species.

By then, world population centers will have shifted to Asia and Africa, with only 14 of the world’s 100 largest cities in Europe and America. This is a demographic disruption with unpredictable consequences.

In these cities, 21% of the households do not have water supply. In Sub-Saharan cities, 3% of the population defecates in the open and so does 60% of the population in India, which then transfers this practice to cities, making it a cultural habit that is difficult to eradicate.

It is a priority to stop this migratory movement from rural areas and small villages in these countries. India is a very clear example, as sociologists warn that 70% of the population lives in villages that might be forgotten compared to the brilliant technological development of smart cities in the next few years.

In these huge suburbs, governments, local leaders and city councils face the challenge of correcting the urban model and creating incentives for an orderly, inclusive and sustainable development that prevents a socioeconomic collapse and makes circular economy and intelligent urban planning no longer a chimera of rich countries.

Those vulnerable to disasters 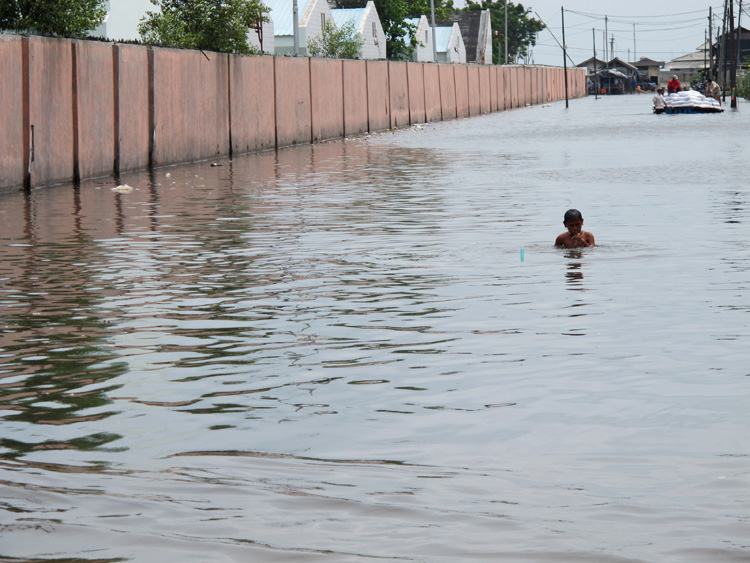 The direct relationship of vulnerability and poverty is easily understood: deficient water and sanitation facilities, shantytowns and overcrowded slums without sewage, which tend to extend to easily flooded areas are factors that increase the vulnerability to violent phenomena, such as cyclones and earthquakes.

According to the United Nations Department of Economic and Social Affairs (DESA), nearly three out of five cities in the world with more than 500,000 inhabitants are at high risk of a natural disaster. These cities are home to 1.4 billion people, about a third of the world’s urban population.

The Foundation’s experience in the disasters caused by Typhoon Haiyan in the Philippines and the earthquake in Nepal show how vulnerable the inhabitants of the poorest areas are and how natural disasters can hinder the eradication of poverty. There is a need for urban actions that end vulnerability and socioeconomic plans that ensure the resilience of these groups in the face of disasters.

Those surrounded by polluted water

The pollution of water creates high rates of inequality and blocks development. The lack of sanitation and purification causes 1.8 billion people to use water contaminated with fecal matter; this is the main cause of death for 1.5 million boys and girls under the age of 5 every year.

Furthermore, the abuse of fertilizers, open-pit mining and uncontrolled industrial dumping cause millions of people to suffer the consequences of toxicity from substances such as cyanide or nitrates. Those most affected are in rural areas of developing countries who are defenseless because they use the water in rivers or lakes for drinking, bathing, washing clothes or cooking.

Also in large areas of Africa, China and India, the excess of fluoride in water generates high levels of skeletal fluorosis, a disabling disability that affects millions of people and is a serious scourge to development. Fluorides are released into the environment by many natural factors and also through the combustion of coal and wastewater from various industrial processes, including the manufacture of steel, aluminum, copper and nickel and the production of phosphates for fertilizers. 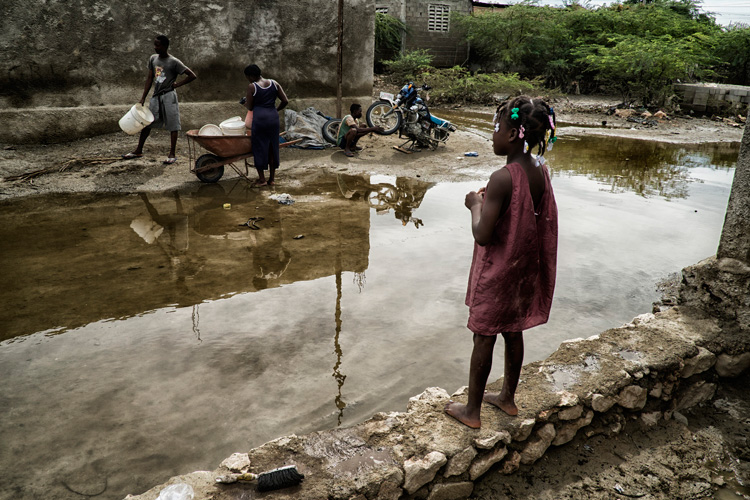 Those who lack hygiene education

Millions of people do not have access to adequate hygiene education. This is a burden for the development of any community. Knowledge of good water hygiene and sanitation practices is essential to ending shamefully endemic diseases in many parts of the world. Good practices that prevent the spread of diseases such as diarrhea, Ebola, cholera, ringworm, schistosomiasis, malaria and respiratory diseases.

According to data from the World Health Organization (OMS), in 2017 diarrheal diseases were the second leading cause of death among children under the age of 5, around 525,000 in 2016; an unbearable scourge that has to end. These are diseases that can be prevented through the access to drinking water, adequate sanitation services and, most importantly, through good hygiene practices.

The Foundation’s experience in projects shows that the transmission of knowledge is unavoidable and is especially efficient among schoolchildren. They behave as agents of sustainable change among their families and as adults they will be leaders of communities free of polluted water. 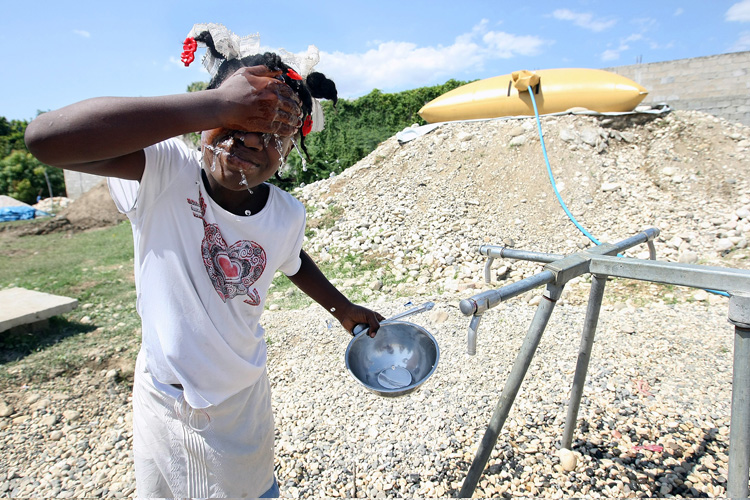 Those who cannot reach technology

The access to systems that guarantee efficient water collection, supply and sanitation is critical. In less developed countries, it is necessary to assume the digital transformation of cities, adopting the circular economy to make the most of the wealth it can generate and efficient irrigation systems to avoid the waste of water and energy. Digital tools and the smart world need to reach the poorest cities or they will not guarantee sustainability on a global scale.

Many can stay behind. It is everyone’s responsibility to avoid this.