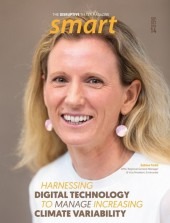 From drought and fire to flood and famine, the impacts of climate change are being felt across the globe. In 2021, weather and climate-related disasters totalled an estimated USD 329 billion in economic losses, the third costliest in history. Governments and industries around the world are responding with an array of new objectives, commitments and strategies in the race to net-zero carbon. But water is not yet included as a central part of decarbonization strategies and roadmaps to success.

In response, Isle Utilities (Isle), a global and independent technology and innovation business consultancy, launched the Trial Reservoir in December 2021: a new evergreen loan fund, to deploy £1 million of funding per year into trials of climate change mitigation technologies in the global water industry and adjacent sectors. In partnership with Xylem and 12 other sponsors including utilities, investment firms, and engineering companies, Isle has developed the award-winning Trial Reservoir to provide funding and support for technology trials and shorten and de-risk the path to commercialisation.

The Trial Reservoir is gathering momentum and was recently recognised for the innovation in decarbonising category at the WEX Global Awards 2022, held in Valencia, Spain in June this year. The Trial Reservoir has also featured in a briefing paper presented by Isle at the World Economic Forum (WEF) Annual Meeting in Davos, Switzerland in May. The briefing paper sets out how the water sector can overcome barriers to innovation.

The Trial Reservoir provides loans to technology companies to cover the costs of the trials of their technology (with a TRL 8 or 9), which only become repayable if a trial proves to be successful, thus triggering a commercial contract. A key feature is that the Trial Reservoir only funds trials when there is a commitment in place from the client to deploy the technology under a commercial contract if the trial is successful. While such contracts are particularly difficult to secure, Isle’s long held and trusted relationships with water utilities around the world mean that it is well-placed to assist technology companies with these negotiations. Participants of the Trial Reservoir can also opt to self-fund trials or leverage their trial and purchase agreements to raise commercial debt. For larger trials, Isle may approach its sponsors, which also include Stratford Capital and Pura Terra Ventures to fund trials directly.

The essential strength of the Trial Reservoir is that it bridges and de-risks the infratech investment gap through loans for innovative technologies. Seven trials have been funded across seven countries since the programme started with an estimated carbon saving of 120,000 t CO2e per annum and there are six ongoing trials currently from the 120+ in the Trial Reservoir pipeline.

But being innovative is challenging, and rising to this challenge demands a paradigm shift, which can be done by multinationals, utilities, municipalities and small companies. The water sector can also be risk-averse, resulting in the slow uptake of innovative technologies. Common barriers to innovation include a poor selection of technology, lacking a clear understanding of the value technology brings, no executive sponsorship, lack of processes on how to innovate or rejection by the utility of the new and unknown. Adding to this, insufficient capital is the most common barrier for technology developers to enter the market and widespread uptake of their innovations. In fact, according to recent statistics, 38% of technology start-ups that failed between 2018 and 2022 across all sectors included insufficient funds among their reasons for failure.

I believe that the Trial Reservoir has all the elements to be a programme that accelerates the path to commercialisation and helps the water sector overcome barriers to adopting innovation in the race to carbon zero and green transition in the water industry.