Water scarcity is internationally recognized as one of the main crisis affecting the human life, environments, and impedes sustainable development plans. This crisis commonly appears in The Sahara (Sahara signifies "desert" and is recognized as the desert in North Africa). It is characterized by environmental and climate changes with natural variations according to the availability and spatial distributions of water resources.

Consequently, water (including groundwater) is at the core of the 2030 Agenda where securing its resources for people, productivity and the environment is essential for any reasonable development, to eradicate poverty and hunger, and completely accomplish the SDGs. The particular importance of groundwater is that it is the main source for the development of The Sahara. Therefore, we are in dire need to increase the accuracy of the decisions related to protection and exploration of this resource, especially under climate change. Accordingly, this article presents a scientific theory that may help hydrogeologists in their future studies and enable them to reach more accurate decisions.

Nowadays, The Sahara looks very arid when it only receives rare rainfall with very small quantities. Anyone may imagine at the first glance that it had this aridity conditions since the development of planet Earth. Hence the importance of the paleoenvironmental investigation can be illustrated where it inform us that those deserts were in the near past (pluvial times) receiving huge amounts of precipitation, such as currently received in Europe and was green instead of today's yellow color.

The paleoenvironment means the past environment that had been preserved in rocks and landforms. It includes the historical conditions that prevailed in an area with times such as climate, hydrologic cycle, and geologic history. The most significant question is, where did that water (paleo-rain) go during the past rainy seasons? The answer is simply that part of these huge amounts of freshwater had been drained to the seas and oceans, while the largest share has contributed effectively to recharge the groundwater aquifers. Consequently, this paleoenvironment had created many landforms and deposits which are formed only under the existence of freshwater for long periods during the past geological ages. These landforms and/or deposits are including; Alluvial fan, drainage lines, terrace, gorge, tufa, playa and lacustrine. Therefore, the presented theory is based on the investigation and mapping of these landforms and deposits which resulted from the residence of freshwater for long periods and thus delineates the potential sites for groundwater paleo-recharge.

In this regard, to achieve the mapping processes; remote sensing and GIS applications should be used integrating it with field studies where the spectrum signature of the mentioned landforms and deposits can be determined through the spectral analyses processes of the satellite images after GPS survey during field investigations. Accordingly, the paleo-recharge sites that are thought to have good groundwater accumulation will have the first priorities for further investigation. This by extension will enhance the decisions related to groundwater exploration and will save costs and time. Based on aforementioned discussion, this theory provides a new layer of information about the areas that may have been recharged previously and therefore should focus on those areas, specifically geological and hydrogeological studies. Of course, locating these sites in the vast and huge Sahara will save a lot of time and effort in exploring groundwater and makes the focus on specific areas. Accordingly, I invite researchers in the field of hydrogeology to apply this theory throughout investigation of any desert areas in order to explore groundwater.

The validation of this theory can be achieved through subsurface and geophysical investigation as well as groundwater isotopes data. This theory was already tested through a few studies includes Egyptian Eastern Desert (Sultan, et al., 2011, Yousif, et al., 2018) and Egyptian Western Desert (Abotalib et al., 2019). These studies indicate that the aquifers in The Sahara were recharged during the past wet climate times (pluvial) with reasonable contributions throughout the intervening arid periods. Also, we examined this theory through a published paper (Yousif, et al., 2018) which was carried out in Cologne University (Germany) under the supervision of Professor Olaf Bubenzer, where the finding provide information about palaeoenvironmental changes and wetter climatic periods in the younger geologic past (particularly in the Late Pleistocene and Holocene period), which have affected the occurrence of present day groundwater.

Drilling on Mars for groundwater exploration: challenges and opportunities 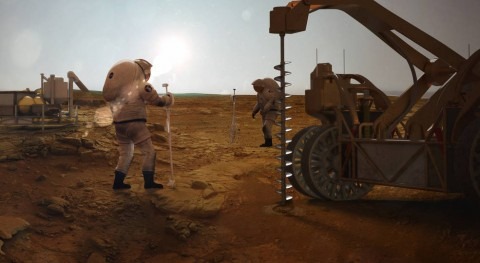