How we can “bank” water underground for use later on

Groundwater has often been seen as the underground resource that never runs out. This “out of sight out of mind” attitude means wells and boreholes are indiscriminately sunk and that groundwater is abused by the public and even by governments. This is exacerbated in times of drought and even more pronounced in arid areas.

Since groundwater was developed as a science 150 years ago by Henry Darcy, several ideas using engineering and technology have cropped up on how best to manage it. Aquifers, which are groundwater reservoirs, have been used for centuries as a water source for drinking and agricultural purposes.

One idea is known as managed aquifer recharge. Here, groundwater is recharged in a controlled way into the aquifer. This allows water to be “banked” – stored underground – so that it can be used later.

Banking water minimises the impact of evaporation and means that water can also be recycled from various sources, instead of being wasted. This recycled water could stem from stormwater or even wastewater treatment plants and then be put back into the aquifer.

The fundamental idea behind better groundwater management emerged from the Middle East during the 1st millennium BC, where they are known as Qanat systems. These were hand dug tunnel and outlet well systems, which basically lead groundwater from one point to another for abstraction.

Today, various forms of managed aquifer recharge projects can be seen all over the world. In the US, they’ve increased from three well-fields in 1985 to approximately 72 in 2005 and many are in various stages of development.

In Africa multiple projects are being developed in several countries including Namibia and South Africa.

South Africa’s Atlantis dune field, which is comprised of infiltration ponds, has been operating for over 40 years. It uses recharge basins that are larger than 50 hectares in size. The aquifer produces about four million cubic metres of water each year. This supplies the town of Atlantis with the majority of its water.

Groundwater recharge, defined as the addition of water to the aquifer once it has reached the water table, can happen in several ways:

This last means of recharge is managed aquifer recharge, where water is “banked” and can be used later on. It is also used in coastal aquifers, to prevent too much seawater from getting in by injecting fresh water into groundwater reservoirs. This minimises the impact which salt water has on the aquifer and extends the life of the groundwater reservoir.

There are many ways and models for managed aquifer recharge. These include:

These are chosen based on the geology of the area or on how much water is needed.

The process isn’t a magic bullet. It does have some issues. One of the major problems is that wells could get clogged up by organisms that grow due to the large amount of oxygen that accompanies water injection. But this can be solved by using heated water or chemical injections to kill off the microbes.

For projects to be successful there also needs to be a reliable source of water, good engineering expertise and proper environmental and legal regulations.

There also needs to be proper assessment on whether an aquifer can just be better managed – a simple, yet effective, solution that can cut costs and increase the longevity of an aquifer rather than implementing an managed aquifer recharge scheme.

Banking water is not simple and needs meticulous planning and execution. But, in places where it is needed, the opportunities it presents allow us to minimise the impact which evaporation has on our water supplies and this means more water for more people.

Wetlands do the job of expensive technology, if we let them 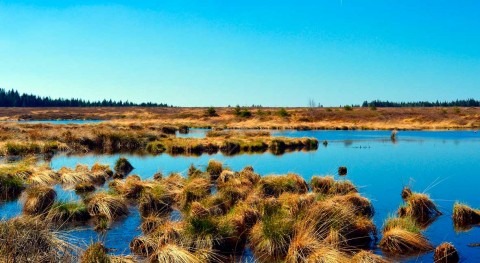