Amid the very legitimate dire warnings from scientists and others about the future worsening impacts of climate change, there is also, unfortunately, a great deal of hyperbole about how much worse things will get. Often it is difficult to separate truth from mere speculation.

Essentially, it has become fashionable to portend the disastrous end of many things due to climate change.

This includes foreshadowing the coming demise of the insurance industry due to spiralling natural disaster claims costs resulting from such events as Hurricanes Harvey, Irma, Maria, Florence and Michael or the current floods in eastern Canada. Related is talk of the almost certain implosion of the non-traditional reinsurance sector, whose catastrophe or “cat” bonds have been likened to the sub-prime mortgage-backed securities that nearly caused a complete meltdown of the international financial system in 2007-2008.

The theory is that severe weather claims driven by climate change will force numerous cat bonds to be triggered simultaneously, meaning investors would lose part or all of their investment in the securities. These bonds transfer insured catastrophe risk to bond investors in a way that some argue is similar to how mortgage-backed securities transferred sub-prime mortgage risk to investors a decade ago.

This simultaneous triggering of multiple cat bonds, according to grim predictions, will essentially precipitate another global financial crisis as a contagious domino effect ensues from the failure of these bonds.

This theory is problematic on several fronts, not the least of which is scale.

But first let’s define both reinsurance and cat bonds.

For laypersons, traditional reinsurance is often described as “insurance for insurance companies.”

Essentially, just as a motorist or homeowner can purchase insurance to pass on financial risk, insurers can purchase protection of their own called “reinsurance.” Reinsurers themselves can also pass on risk via what’s known as the “retrocession” market.

Through reinsurance, insurers are able to pass on some of their risk via payment of a premium. The system is essentially designed to spread risk geographically and over several pools of capital, with the intent of preventing a large unexpected loss from taking down insurers or even the entire insurance system.

Since about the mid-1990s, innovation in the reinsurance sector led to the rise of the non-traditional reinsurance market. While there are a few different products that can be classified as non-traditional, the cornerstone of the market has been the catastrophe or cat bond.

Cat bonds are fixed-income securities that normally pay investors (in this case, bond-holders) rates of interest that are often higher than other bond offerings on the market, thereby rewarding investors for the somewhat unique risk being taken on.

However, if a natural disaster plays out in a manner specified in the bond prospectus (the type of event, location and damage threshold, for example), the bondholder could lose some, most or all of their invested principal or interest.

A segment about cat bonds by ‘Forbes.’

Cat bonds: Why there won’t be a meltdown

Some have argued the cat bond climate change meltdown theory portends a coming disaster for the sector.

Conversely, others have written about the many flaws of comparing cat bonds to sub-prime mortgage-backed securities. However, it appears that no one has addressed the elephant in the room — there can be no serious comparison made in scope or scale between cat bond issuance and the total issuance of sub-prime mortgage-backed securities that existed in the lead-up to the 2007-2008 financial crisis.

Further, while the majority of the $29 billion currently in force in cat bonds is largely allocated to weather-related risks, several billion is allocated to earthquake risk, terrorism risk, life insurance-related longevity risk and mortgage risk.

Securitized mortgages in the run-up to the financial crisis, on the other hand, overshadowed these numbers by several magnitudes.

According to researchers Yuliya Demyanyk and Otto van Hemert:

“The total amount of mortgage-backed securities issued almost tripled between 1996 and 2007 to $7.3 trillion. The securitized share of sub-prime mortgages increased from 54 per cent in 2001 to 75 per cent in 2006.”

In addition to problems with the actual sub-prime mortgage-backed securities themselves came a sub-crisis precipitated by the triggering of large values of credit default swaps, financial instruments that act as credit insurance for mortgage-backed bonds if bond issuers are not able to pay investors what they’re owed.

Since 2000, the market for CDS went from US$900 billion to more than $45 trillion. The amount of outstanding CDS reached $60 trillion in 2007. As more and more issuers of sub-prime mortgage-backed bonds were unable to meet their financial obligations, underwriters of CDS were tapped to make good on their promises.

It’s quite clear by these numbers that the crisis precipitated by the flameout of sub-prime mortgage-backed securities in 2007-2008 — and, as a result, of CDS markets as well — was entirely different in size, scope and impact than if the $29 billion cat bond market (or even all of the $97 billion in non-traditional reinsurance) were to simultaneously implode.

So while the theory of climate change causing a collapse of the global cat bond market, thus precipitating a global financial crisis like we saw in 2007-2008 seems plausible — perhaps even inevitable — in reality, it is highly unlikely.

Why Canada’s political system makes it difficult to fight floods 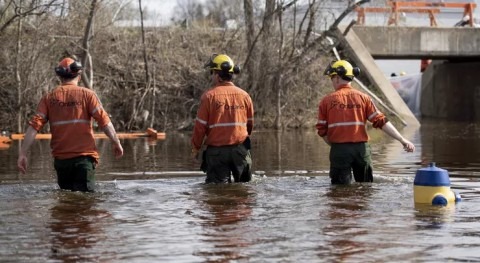