More than 100 hundred large reservoir dams were constructed in the Canary Islands (Spain), between 1900 and 1990 (78, in the island of Gran Canaria and 20, in the island of Gomera). Most of the dams were built by means of cyclopean masonry, a few as rockfill dams and one as a vaulted dam. The historical and cultural value that these great sites hold must be acknowledged, but their state must be checked. In the Canary Islands, there isn’t a Dam Safety Department.

The construction of large dams in the Canary Islands’ Archipelago began before the first concessions were granted in the year 1904 for the dams of San Lorenzo (Martinón) and Pinto (The Dam), both in Gran Canaria. The need to have bigger water flows for irrigation led to some of the work being done before receiving the authorization of the Department of Public Works of the Canary Islands Regional Government (excavating foundations, first metres of walls and some supplementary works such as openings into drains, channels, pipes, etc.). The first final inspections were those of the Pinto dam (1910) in Gran Canaria  and Coscos dam (1914) in La Gomera. The first incident happened at the turn of the century, during the construction of the wall of the Dam of San Lorenzo, when a single ancient crack on the ground was exposed.

What was initially planned and what finally was constructed between 1902 and 1980 in the 7 volcanic islands becomes more significant if we remember what Juan León y Castillo wrote in 1862, when he was only 24 years old, concerning the project to build masonry dams in the Tamaraceite Gully (Gran Canaria) to create reservoirs for irrigation: ‘if the pilot produces these favourable results, others will be encouraged to build similar works in other valleys in the region, and the fate of this nowadays unproductive area will change. Without any doubt, as a result of the success of this venture, a new era will be born for these islands’.

The profile of the seven-step dams in the Tamaraceite Gully was incorrectly designed. It was a design similar to that of some dams constructed in the first half of the 19th century in France. The section consisted of a series of steps forming a slope on the upstream side, while the downstream side was almost vertical and flat. As engineers Díez-Cascón y Bueno say in their work Ingeniería de Presas: presas de fábrica (Dam engineering: masonry dams, 2001), ‘concerning the suitability of this type of profile, it is enough to point out that turned 180º, that is to say, with the upstream side facing downstream, it would have been more adequate’.

At the end, the pilot project did not go through, although the young Juan León y Castillo was an engineer with a forward looking approach, because ultimately, the new era started in the first decade of the 20th century with the development of new projects (San Lorenzo, Pinto, Los Cocos, Hormiguero, Casablanca, Marquesa, etc.) and the beginning of the construction industry, in the Canary Islands, with works that are ‘something more than infrastructures’. And the unproductive coastal area became prosperous.

If the project of the San Lorenzo Dam by the engineer Juan León y Castillo had an enormous influence on those who did stone masonry dams until the 1930s, we can say that the Pinto dam set the path to be followed by the other water user associations, irrigation associations or private farmers with water use rights, since for years it was the largest water infrastructure in the Canary Islands. This infrastructure was successfully used for more than 100 years; for this reason, this old lime masonry wall and all the hydraulic masonry walls that line the reservoir are a very important part of the hydraulic heritage of the Canary Islands.

In 1960, the engineer Fernando Ascanio y Montemayor outlined, in a report about the stability of the Hermigua dam (La Gomera), his impressions about the methods used in the construction of reservoir dams in both provinces of the Canary Islands. His description of the particularities of the construction of great dams in three stages was due to the ‘superb qualities of the land for the foundation. Therefore, certain principles considered basic and untouchable in the Spanish mainland had not been taken into consideration in the Canary Islands’.

The body of the wall of the old dam of Pinto was made of masonry, built with lime mortar. The upstream wall was waterproofed with a simple coat of lime mortar and cement, because it eliminates the setting cracks. The Pinto dam was a tremendous success; as a result, numerous water user associations, irrigation associations or private farmers decided to build great reservoir dams in the banana tree farms of the north coast of Gran Canaria (the dams of Marquesa, Hormiguero, Cardoso, Garzas, etc.)

According to Alonso Franco, as engineer in charge of the Canary Islands for the Directorate General for Water Infrastructure (the old Central Water Commissioner), ‘the general characteristics of the old lime masonry dams in the Canary Islands are as follows: a curved ground plan; a triangular section with a vertical upstream wall and a downstream talus not large enough to consider it as a pure gravity dam; many of them lack a spillway; there is no outlet in the masonry, the inspection tunnels or a bottom outlet; and, in spite of having very little reservoir capacity, they have in general a great number of intakes and a wide tunnel across the bottom part to clean sediments’.

In the Canary Islands, some elements such as the steps in the downstream side and the talus at the bottom of the upstream side remind us of the criteria and the calculation procedures characteristic of the last third of the 19th century.

With regard to the reservoirs, it is common to observe partial coatings with lime mortar and cement, in all the old dams. In old projects, descriptions of geological aspects by the dams builders were scarce, but in the Canary Islands, if the bed was permeable, it was waterproofed. Among the old dams of the archipelago, the great dam of Casablanca (Gran Canaria) stands out due to its magnificent coating work.

It seems that the first geological report for the construction of a great dam by an expert was drafted by the Geology Professor Lucas Fernández Navarro, in 1927. It was entrusted to him prior to the construction of the Cuevas Blancas dam, in the mountains of Gran Canaria. The initial project dates from 1905. Regarding the central mountain of the island of the dams, Fernández Navarro wrote at the time that ‘its structure was  maybe unsuitable for groundwater exploitation, but excellent to build surface water reservoirs’. Finally, two big dams were constructed in the mountains of Gran Canaria. Los Hornos dam was a success, and Cuevas Blancas was a failure, although the history of its construction is one of the most interesting of all the dams in the Canary Islands.

Subsequently, Dr Jacques Bourcart prepared a geological report of the valley where the dam of Soria was finally constructed. Bourcart did a study for a gravity dam with a curved ground plan 90 metres high, with a foundation. In spite of these two old reports, in the following decades many projects only had meagre geological descriptions.

Among the insight contributed by Ascanio and Montemayor about the construction of dams in the Canary Islands, he noted three fundamental reasons due to which ‘dams that were constructed without complying with the conditions demanded at the time had not failed’. The first of the reasons was that ‘all the old dams had been built on strong layers of basalt, trachyte or phonolite, very compact. Thus the pressure that would cause problems in permeable land was avoided’. The second of the reasons was the fact that ‘the private initiatives had not turned to builders with enough auxiliary means to finish them quickly. The construction of these works of stone craft, on the contrary, had been slow, and as a result the lime mortar had enough time to harden after a long period of time in contact with air’. Lastly, ‘the coat with a mixture of lime and cement mortar, instead of only cement, led to complete and long-lasting waterproofness of the upstream side in the old dams’.

The incident of the dam of San Lorenzo, in the 1903-1904 hydraulic year, occurred when the water stored behind a 12 metres wall under construction exposed and important crack in the ground: a single ancient crack, according to the Public Works engineer who authorized the project in 1904. The second incident happened in March, 1988, when water exposed the old natural crack again. It seems that when the primitive wall was made higher (up to 28 metres) in the 1960s, the eye inspections done by the Public Works engineers of Las Palmas in the early 20th century were ignored. The crack in the ground at the turn of the century became a bad foundation for the primitive dam.

But it was on the 21st of February of 1934 when the sudden breakage of El Toscón dam took place in the San Lorenzo municipal district (Gran Canaria), causing the death of 8 people including children and adults. Water flew with great force through the valley completely destroying the La Hoya’s bridge, on the road that leads to Teror Town from Las Palmas, several staff houses and some banana tree farms. This tragedy was named at the time the terrible Disaster of El Toscón.

The remains of the wall, a material that is available for us, is also part of the hydraulic heritage of the Canary Islands. From the photograph of the wall section, where we can see a small wall at the top of the upstream side, some interesting conclusions can be drawn. According to the newspaper ‘Diario Republicano Federal’, it was ‘a disaster provoked by the greed of those who measure their income for pleasure through the amount of water that enters their dams.” Liquid gold. 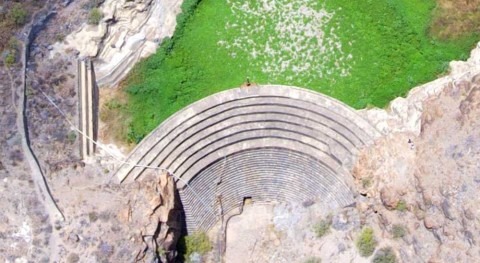 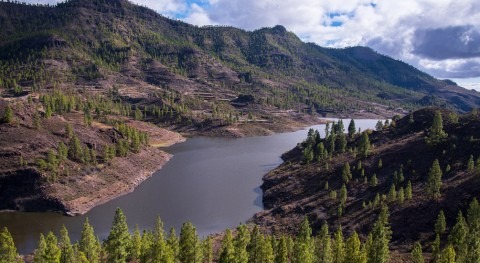 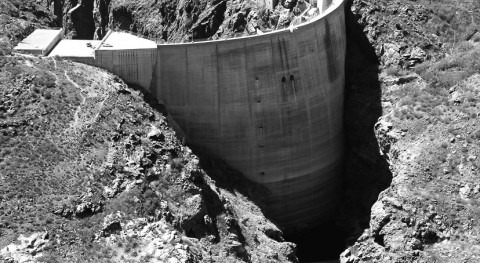 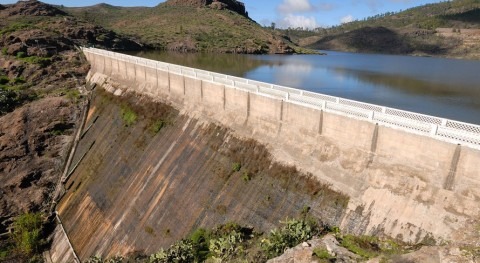