'Nessun dorma', 'Nessun dorma' (Let no one sleep!), starts the aria by the same name of one of the best known and the most sung operas by Giacomo Puccini, belonging to the third act of Turandot. It can foretell a restless sleep related to the management of a resource which is as essential as it is scarce in some parts of the world; when figures place us in an uncomfortable position, it seems as if we just woke from an eternal sleep.

In this article we will highlight some of those figures and data that should make us be alert, very alert, abandon our ongoing complacency and look at the future. We live in the present, thinking it is better than the past, but not thinking that there must be a 'tomorrow': we must point out some tools to provide society with a basic and essential resource, emphasising the eleven sustainable development goals that were discussed in the UN Sustainable Development Summit of 2015. Goal number 6 refers to clean water and sanitation, whereas goal number 11 focuses on sustainable cities and communities. Cities where suburban areas, home to 828 million people, are a major challenge. For instance, Renzo Piano, Italian architect and senator (winner of the Priztker Price, the Nobel Prize of architecture), spends his senator salary towards studying how to improve Italian suburbs with a hired team of young architects. Cities are 2% of the planet but consume from 60 to 80% of the energy and generate 75% of CO2 emissions. This rampant urbanisation has put huge pressure on drinking water supplies, on waste water treatment, with lack thereof, and also on public health, since nowadays more than 1.5 million children die every year as a result of water-borne diseases, according to UN data.

Therefore, the first question would be, can a world with 7 billion people, where since 2007 more than half the population live in cities, be a sustainable world? British film maker Peter Weber and Stephen Emmott, university professor, Director of Microsoft Research in Cambridge and visiting professor in Oxford University, wondered about this. They estimated that by 2100 there would be 10 billion people on Earth, and made a documentary as a wakeup call, stressing the issue of where are we headed and whether such excessive population growth is sustainable. Concerning water resources, they note that to date, there are still 1 billion people with no access to 'quality' drinking water and that 70% of drinking water is used for agricultural purposes. And they let us take a glimpse of the new concept 'hidden water', to which we will come back in a while.   ​ 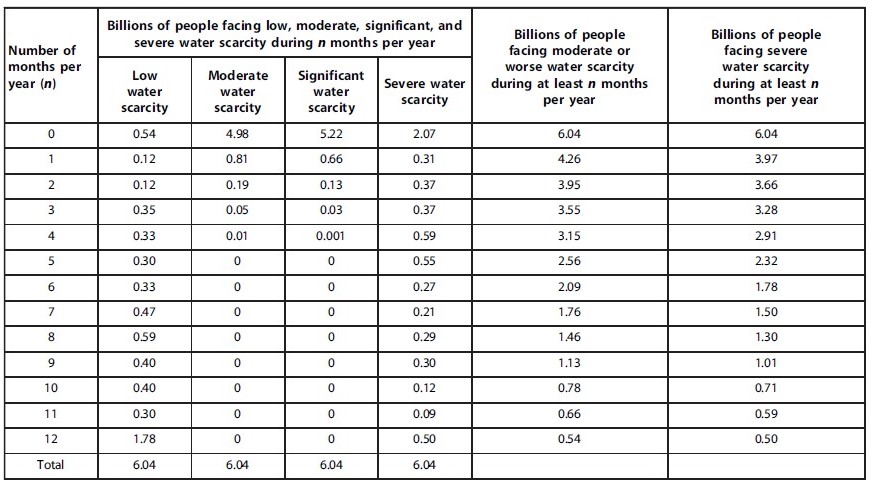 Chart 1. Number of people facing low, moderate, significant, and severe water scarcity during a given number of months per year, for the average year in the period 1996 –2005. [1].

The table above reveals that Weber and Emmott were right in their documentary ‘Ten billion’ (Oxford Productions); only a paradigm shift and a change of mentality can 'wake us up' on time, and as Mekonnen and Hoekstra, authors of the article cited, highlight freshwater scarcity is at risk of increasing, and three fourths of the world's population live below the minimum conditions at least one month of the year (half of them in India and China).

From the British Isles we go to the land of tulips, to the University of Twente in Enschede (eastern Netherlands, almost at the border with Germany), where in 2002 the late Arjen Hoekstra had a brilliant idea. He thought it would be interesting to measure how much water was needed to manufacture a product, for instance a pair of jeans, a cotton T-shirt, or food. He also calculated how much water gets polluted as a result of manufacturing those foods or products in the production chain (Table 2). Adding up those two amounts, he obtained what he referred to as the 'water footprint'. This expert in efficient water resource management noted that 90% of the world's drinking water is used for agricultural purposes, and if only 1-4% goes to human consumption, we have to focus on improving technological innovation in fields and crops, because our current way of doing things has 'negative externalities' making cropland a real sink for water that is used with no control. 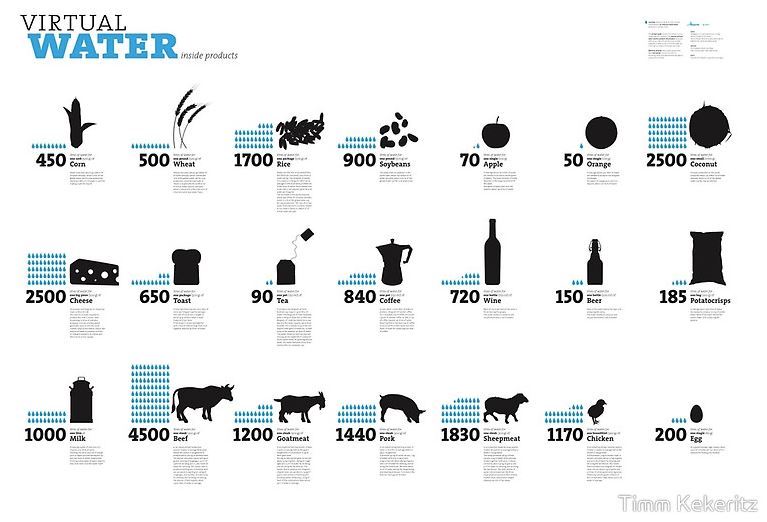 Therefore, we have to analyse production processes and the water performance of industries, and encourage industries that reduce their water footprint in order to trigger a change in mentality and raise awareness, noted professor Hoekstra, because, on top of that, most foods are imported from countries that suffer water scarcity.​ 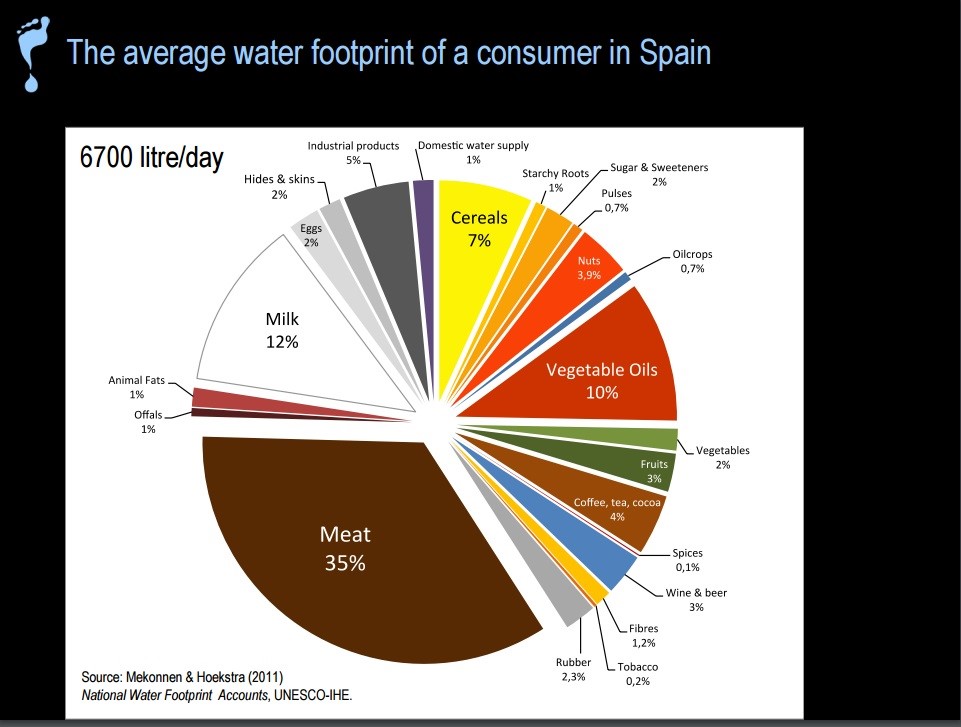 Figure 1 shows the average footprint of a consumer in Spain in 2011 according to professor Hoesktra, where we can see that 64% of the water consumption corresponds to meat, vegetables, milk and cereals. Therefore, we have to focus on improving agriculture and livestock production, and improve the food industry, in order to decrease the amount of water consumed, and thus reduce the water footprint of these sectors which are so important for citizens.

Nevertheless, in our global economy it is possible to obtain cheaper products wherever water is not valued or appreciated, and often is wasted, either because it is a wet country, or because water is free or subsidised in the last step of integrated water cycle management, in contact with citizens, companies, farmers, etc., pointed out Hoekstra, restating that in a circular economy, the water footprint is zero. In this context, another tool emerges, the circular economy, that could be defined as a social science that studies the effective and efficient allocation — in terms of sustainability — of production factors, leading to a production process or provision of services that does not cause negative externalities affecting the ecosystem- If we introduce this concept into European policy, according to the Ellen MacArthur Foundation, the GDP of the European Union could grow by 11% by 2030, and escalate to 27% by 2050, instead of the current projected growth of 4% and 15% [6] with our linear economy system. European institutions have committed to this paradigm shift, to encourage a change towards a circular economy and more sustainable economic growth that will create new jobs (an estimated 2 million) as well as increase competitiveness. 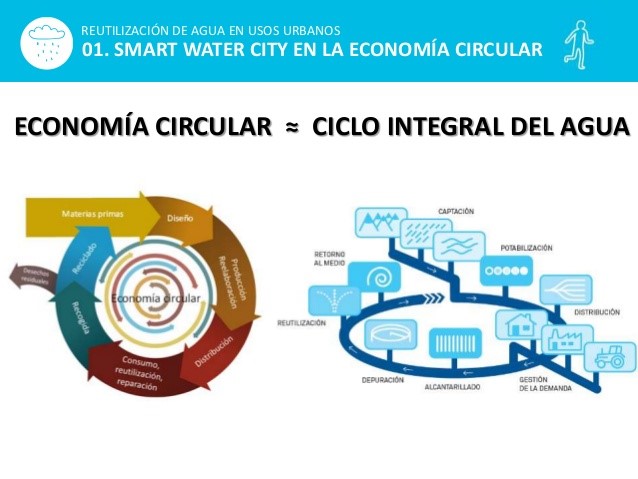 Moreover, as can be seen in Figure 2, we must introduce reuse as one of the integrated water cycle processes, as Antonio Sánchez from Aguas de Alicante explains, to apply the principles of the circular economy to all processes: from water abstraction to waste water treatment and reuse, since water can be reused for many purposes, such as street washing, cleaning the sewerage system, irrigation of olive tree crops and parks and gardens, ornamental fountains, etc.

We delve into the application of this concept to integrated water cycle management: we must 'compel' our leaders to close the cycle by putting into operation the waste water treatment plants required to comply with the European Directive, without further delay. As the 7th report of the EC has pointed out, we have not yet achieved 100% treatment of pollutant loads, and, even more serious, there are still important European capital cities which do not adequately treat their waste water effluent, so we cannot yet fulfil the indications of the EC in its circular economy package [8] on the measures to facilitate water reuse, including a legislative proposal on the minimum requirements of reused water, for example for irrigation and aquifer recharge. Introducing water reuse permanently into the integrated water cycle is something essential, because thanks to it we would not depend on groundwater withdrawals and precipitation patterns, in such a way that we would reduce the water footprint of our technological and industrial processes, reducing that 'hidden water' we mentioned before, and providing our fields with technological innovation to reuse every drop of water. As Antonio Castillo, hydrogeologist at the University of Granada and Spain's Science Research Council (CSIC), puts it: 'water is life, it is our landscape, our culture, it is leisure, recreation, tourism, it provides food and drink, and it is an economic engine'. This way, we can completely turn around our production and economic system, participating in a change of mentality of those that steer the course of this ship called Earth.

Going back to Puccini and his masterpiece Turandot: 'All’alba, vinceró'. We will succeed with the dawn of a new way of doing things for all of us that work in the management of such a vital resource as water; even though it might be complex and difficult, the effort will be worthwhile, and as Igor Stravinsky wrote in Poetics of Music, 'whatever diminishes constraint, diminishes strength. The more constraints one imposes, the more one frees oneself of the chains that shackle the spirit'. The more difficult our goal, the more we are compelled to row in unison towards the same objective: a more liveable and fair world. Hopefully when dawn comes we will be all 'awake'.

In memoriam of teacher A. Hoekstra.