Nigeria floods: building dams and planting trees among steps that can be taken to curb the damage

Nelson Odume
Dr Oghenekaro Nelson Odume is a Senior Researcher and Director of the Unilever Centre for Environmental Water Quality within the Institute for Water Research at Rhodes University.

Nigerians are no strangers to flooding. In some parts of the country, flooding is an annual event. But the intensity varies from one year to the next. In some years, the effects are minimal, in others, devastating. The 2022 floods have caused massive damage, like those experienced in 2012. Ten years ago more than 7.7 million people in 32 out of 36 states were affected. The recent floods have affected 1.4 million people in 27 states. Water researcher Nelson Odume explains what’s responsible for the flooding and what Nigeria should do to prevent future occurrences.

Causes of flooding in Nigeria

There are different types of flooding. One is fluvial flooding, which occurs when rivers overflow their banks.

The second is coastal flooding, which occurs when water from the marine environment submerges low-lying adjoining lands.

The third is pluvial flooding, which occurs due to intense, heavy rains.

In Nigeria, the three types of flooding are interrelated because the peaks of all three flooding types can coincide seasonally.

Some of the principal causes of flooding in Nigeria are rapid urbanisation, poor spatial planning and poor solid waste management, including drainage systems being used as dump sites.

Nigeria’s population has been growing rapidly – it’s currently estimated to be over 200 million from 122.3 million in 2000. There has also been rapid urbanisation in the last six decades. Today about 55% of the population lives in urban centres.

The rapid population growth combined with urbanisation and poor spatial planning means that people are building on flood-prone areas such as river banks, wetlands and low-lying areas.

Another consequence of poor spatial planning is that storm water and drainage systems are built that aren’t fit for purpose. In many of Nigeria’s cities, the storm water systems are inadequate to handle flooding peaks. As a result, communities living downstream are sometimes flooded.

Poor solid waste management is a key contributor to the problem of flooding. Often, drainage systems are used as dump sites, blocking the flow of water.

Another factor has been a change in rainfall patterns in the country, particularly an increase in extreme events. Rainstorms lasting up to five days are becoming more common. And it’s predicted that they will increase due to climate change. These extreme rainstorm events cause serious flooding.

Another feature of the country that adds to flooding risk is that it has numerous rivers, including transboundary river systems such as the Rivers Niger and Benue. Poor water infrastructure developments such as dams, reservoirs and bank protection contribute to the annual flooding.

For example, the release of excess water from the Lagdo Dam in Cameroon, which often contributes to flooding in Nigeria, was supposed to be contained by a dam, the Dasin Hausa Dam in Adamawa State, north-east Nigeria. But after more than 40 years the dam still isn’t complete.

Many of the rivers in Nigeria are poorly managed and regulated. Siltation of major rivers such as the River Niger, as well as removal of vegetation from river banks and wetlands for agricultural purposes, are all outcomes of poor water resources management which have also contributed to flooding.

The most important consequences are socio-economic, health-related, ecological and cultural.

Socio-economic consequences include the loss of lives, emotional and psychological distress, and destruction of property, social amenities and infrastructure worth billions of naira.

For example, the 2022 flooding has claimed the lives of more than 500 people, destroyed more than 200,000 homes and left around 90,000 homes under water. It has also displaced over 1.4 million people. The congregation of people in camps for the internally displaced and their separation from their ancestral homes and loved ones often causes emotional and psychological trauma. This gets little attention in the Nigerian scientific literature. But empirical evidence suggests that victims of natural disasters such as flooding often suffer emotional and psychological trauma.

Another effect of flooding is the loss of economically productive time, which may cost the economy billions of naira daily.

Flooding has been linked to an increase in the number of people contracting water-borne diseases such as cholera. Due to poor sanitation infrastructure, floods can distribute faecally contaminated water. Widespread outbreaks of cholera in Nigeria in 2010 were linked to exposure to contaminated water after flooding.

Another consequence is ecological and environmental. A study has shown that flooding tends to increase the spread of chemical pollutants in soils on floodplains.

What should Nigeria do?

The country can address the flooding menace and minimise its effect through a multi-pronged approach.

First, a combination of hard infrastructural solutions and ecosystem-based adaptation should be pursued. Examples include the construction of dams and reservoirs to hold excess water, riverbank protection, construction of levees and spillways, appropriate drainage systems and storm water management regimes, and dredging of some of the major rivers in Nigeria.

Of particular interest is the completion of the Dasin Hausa Dam in Adamawa State and prioritisation of an appropriate stormwater management regime.

Examples of ecosystem-based solutions could include reforestation in important river catchments, planting native vegetation on flood plains that have been claimed for cropping, and creating riparian buffers through vegetation.

Each of these options would need to be carefully studied and implemented.

Building on flood plains must be avoided at all costs. Awareness raising, education and disaster risk communication and messaging need to be strengthened to minimise flooding effects in Nigeria. The Nigerian Hydrological Services Agency, the Nigerian Meteorological Agency and the National Emergency Management Agency are all important institutions that need resources and capacity to avert flooding in Nigeria.

Lagos is getting less rain, but more heavy storms. What it can do to prepare 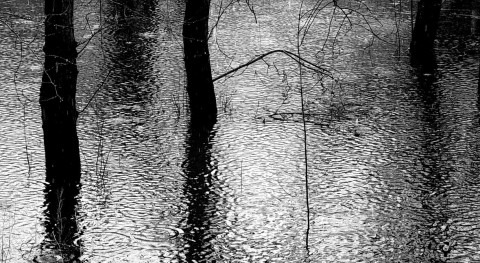