Raya A. Al-Masri
Raya is a final-year PhD researcher in the Centre for Environment and Sustainability (CES) at the University of Surrey.
web

More than 2 billion people live in “water stressed” countries. These are territories where more than 25% of the available freshwater resources are withdrawn for human use each year.

Desalination - the process of removing salt from seawater - is increasingly being used to tackle water scarcity worldwide. Roughly 16,000 desalination plants now produce 35 trillion litres of freshwater annually. And Jordan, a country located north of the Red Sea, is planning a major desalination plant on the Gulf of Aqaba that will increase its desalination capacity from 4 billion to 350 billion litres each year.

But desalination tends to be energy intensive and produces saline wastewater called brine. On its return to the sea, brine can damage marine ecosystems. Research suggests that desalination may be making some water bodies, including the Red Sea, the Arabian Gulf and the Mediterranean, saltier.

We analysed whether current and future desalination plans present a threat to salinity levels in the Red Sea and the Gulf of Aqaba. For both water bodies, the increase in salinity will likely be undetectable and less than natural seasonal variations, in which case it would not harm marine life.

Neither water body has a freshwater inflow, so salinity levels are determined by evaporation and the inward and outward flow of water from the Indian Ocean. Water entering the Red Sea flows north where it evaporates and cools, raising its salinity and density. At the head of the Red Sea, this more saline water sinks and flows southwards as a deeper water layer back to the Indian Ocean.

Between where water enters the Red Sea and where salinity peaks at the northern end of the Gulf of Aqaba, salinity rises naturally by 10% from roughly 36.8 to 40.6 practical salinity units (psu). One psu is equivalent to 1g of salt dissolved in 1000g of water. Marine life in the region has adapted to the natural salinity level of their location.

Several Unesco Natural Heritage Sites are located in the northern Red Sea, including Sanganeb and Dungonab Bay and Mukkawar Island Marine National Parks. The national parks are home to coral reefs, seagrass beds, mudflats, mangroves and beaches. These habitats hold significant scientific and conservation value as they support a diverse range of marine species, including the endangered dugong.

Most marine species can tolerate minor variations in salinity, but they cannot withstand significant and sustained change. Research reveals that rates of photosynthesis and respiration in Stylophora pistillata, a species of Red Sea coral, falls by as much as 50% when salinity levels are raised from 38 psu to 40 psu. Most colonies of this coral will die if salinity is kept at this level for a sustained period.

Making the sea even saltier

Our research used scenario analysis. This is where a number of plausible future scenarios are modelled and their consequences explored.

The most extreme scenario we developed involved high population growth, rapid economic development and falling desalination costs in the Middle East. Nearly 10 trillion litres of water could be desalinated on the Red Sea coast by 2050 and over 2.5 trillion litres along the Gulf of Aqaba in this case.

A less extreme scenario assumed limited population growth and restrained household water consumption. Nearly 2 trillion litres of water could be desalinated by the Red Sea and over 560 billion litres by the Gulf of Aqaba by 2050.

For both scenarios, salinity in the Red Sea increased by less than 0.1%. This increase would be less than the natural seasonal variation in salinity levels and would likely be undetectable.

The Gulf of Aqaba, however, is smaller and more isolated from the Indian Ocean. Salinity in the north of the Gulf therefore varies naturally between 40.2 psu and 40.75 psu. We found that the high growth scenario could increase salinity at the head of the Gulf by 0.5%, from approximately 40.6 psu to 40.8 psu. But even this increase is close to the maximum increase in salinity caused by natural variability.

The medium growth scenario would instead produce a change less than natural seasonal variation and would again be undetectable.

Our research suggests that, if carefully managed, rising rates of desalination may not harm the region’s marine ecosystems. This is particularly important as a considerable growth in desalination is likely to occur in the Middle East

Saudi Arabia plan to construct an entire new city in the country’s north west, called Neom, to accommodate 9 million people and water intensive sectors like agriculture by 2045. The city will depend on water desalinated from the Red Sea and Gulf of Aqaba.

Neom will accomodate 9 million people by 2045.

Beyond the vicinity of each desalination plant, increased rates of desalination are unlikely to affect broader salinity levels in the region. But good plant design and strict environmental regulations will remain critical to avoid environmental harm.

Plant outfalls, through which brine is channelled towards the sea, must ensure rapid dilution by dispersing brine into the Red Sea’s deeper water layer. Ocean currents can then carry the brine out to the Indian Ocean, where it will be further diluted.

Desalination will continue to grow worldwide. If carefully implemented it can be a crucial tool to tackle water scarcity without damaging fragile marine ecosystems.

Coronavirus: what might more hand washing mean in countries with water shortages? 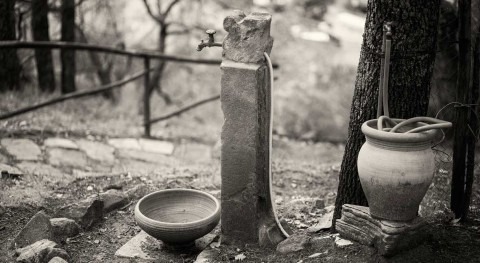