Sara Sánchez López
Contact author
Engineer/Scientist working in Environment, Water, Sanitation, and Hygiene with one foot in the field when possible
twitterlinkedin

Who has seen that recurrent scene in American films where an adult tries to have a conversation about sex with a teenager? While everyone involved wishes to get done with it, the information provided is often confusing, and the scene ends up looking more like a beekeeping training session than a sex ed talk.  Well, something like that happens with the period. There are countless expressions to refer to menstruation, and somehow we still manage to avoid the issue. Blood does not seem to bother anyone in a film about death and destruction, but if it is related to your period, things are very different.

There are countless expressions to refer to menstruation, and somehow we still manage to avoid the issue.

Well, this is why we are here! I would like to present the concept of "period poverty", which refers to lack of access to menstrual hygiene products and education, as well as not being able to live with dignity and safety while menstruating. Period poverty results in decreased education opportunities, social status and health for millions of women and girls, preventing them from reaching their full potential. Let us see what it means with some examples of its impact:

For every additional year of primary school, women's future income increases by 10-20%, and between 15 and 25% for each extra year of secondary education

With these international examples you may think of period poverty as something foreign which does not affect 'developed' countries.  Not at all. Neither Europe, nor USA, or Australia escape period poverty, which just manifests itself in different ways.

According to  Water Aid, in 2018, 1 in 8 women in the United Kingdom didn’t know about periods until they started menstruating, and 1 in 10 cannot always afford to buy menstrual hygiene products (7). It is not surprising that a pandemic can make those data even worse. During the coronavirus crisis, the number of women that turned to NGOs for menstrual hygiene products in the UK skyrocketed. The NGO Freedom4girls has distributed more than 4,500 packs with menstrual products in Leeds in two months, compared with the 500 packs they usually distribute per month under normal conditions (8). On the other hand, the same article pointed out that popular myths were quite widespread. Myths that you have probably heard of, like you cannot get pregnant when you have your period, that exercise is not good, or that the menstrual cycles of women who live together sync up. All of them are false, by the way ( 8,9).

To address this problem there is a logistics aspect which is essential, and starts by ensuring access to water and sanitation. Globally, the Sustainable Development Goals are a major step in this regard, but there are also other issues to be dealt with, such as accepting menstruation as a normal thing and doing away with the stigma. This is the aspect I want to tackle from my keyboard.

The lack of knowledge about menstruation as a natural process implies that sometimes certain powers are associated with it, or the person that has a period is considered impure and even toxic. In many cultures, women are somehow punished while they menstruate, shunning them from religious gatherings, preventing them from touching food out of fear that it may spoil, forcing them out of their home, etc.; the list is long and painful. All kinds of superstitions and myths flourish as a result of embarrassment and misinformation, putting at risk the physical and mental health of women and girls.

All kinds of superstitions and myths flourish as a result of embarrassment and misinformation, putting at risk the physical and mental health of women and girls

What can be done to address it? Repeat with me: E D U C A T I O N. Thanks! Exactly. Education, laws, awareness, and destigmatisation.

There are many ways to educate about an issue, make it visible, and make people accept it as something normal. And not all of them involve books, talks, or seminars. Publicity, in addition to being a reflection of the society it is intended for, can be a powerful ally...

For a long time, advertisements of sanitary products for menstruation featured pure whites, freshness and such a delicacy that you felt as if you were floating. The liquid used to represent blood in those ads was blue (blue like the sea, like the blue sky...), and it always reminded me of window cleaner. Nothing to do with reality, really.

The problem is all that window dressing for such a long time contributes to alienating us from a completely natural process, and perpetuates the idea that menstruation is something dirty or shameful that must be muffled with metaphors or even hidden. Luckily, this is changing and we have come a long way since in 1985 Courtney Cox became the first person to say the word "period" on television in a Tampax commercial (10). Let us review quickly the most important milestones, because it's really worthwhile; you can check the links here. 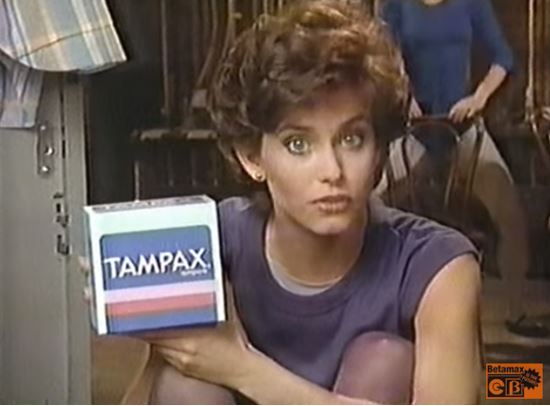 In 2001, EVAX launched an advertising campaign in Spain where a woman dressed in red introduced herself to a teenager saying "Hello! I am your period!" That iconic commercial subtly introduced the red colour in pad commercials for the first time.

EVAX commercial. The woman in red represents the period.

However, we had to wait until 2017 to face reality in public: menstrual blood is not blue. We owe such boldness to a British commercial of Bodyform pads that went viral (you can watch it in this link). The commercial used red liquid and closed with the words "Periods are normal. Showing them should be too". This commercial broke all taboos and has led the way forward. And others have followed the same path, although they have been emerging companies for the most part.

A few months ago, the Thinx brand of period underwear launched a commercial were we can see typical scenes when someone has the period, like asking for pads, staining the sheets, etc.; but, in this case, it is men who are menstruating in this dystopian commercial. It ends with the words: "If we all had them [periods], maybe we'd be more comfortable with them". You can look at the video here.

And during the quarantine there have been several ads published as gifs with images like these: 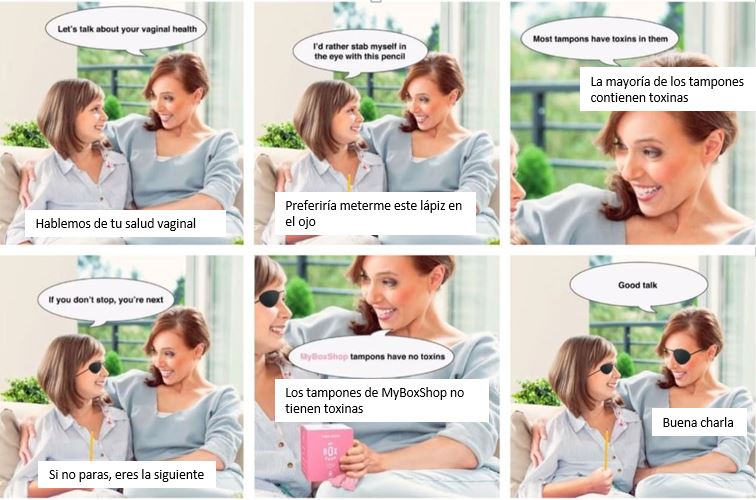 This does not mean that these ads have always been well received. The same Bodyform commercial was used by the Libra brand less than a year ago in Australia and received more than 600 complaints which, fortunately, were rejected (11). In January of this year, Kotex, one of the big firms, published an ad in Instagram using as well red liquid; it is particularly important, as it is the largest company that starts using red (12).

With so many ads, you will have seen there are different products to deal with menstruation, but... How accessible are menstrual hygiene products? In many parts of the world they are out of reach for most people, who use cloths or other materials which, unless properly washed, can cause severe infections. But even in countries where production and distribution are not a problem, they are not universally accessible, because the affordability of a product is very relative... 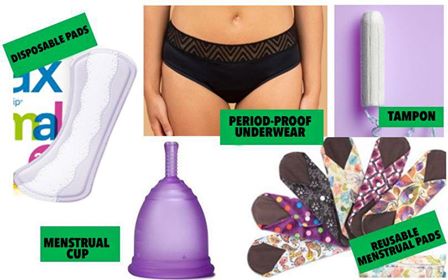 Some countries, like Ireland, Canada, Australia or India have decided not to tax these products. As shown in the graph, each country feels different about it and the tax rate applied to these products varies a lot.

Kenya approved a law in 2017 stating school-age girls should be provided pads free of charge. However, this measure was not in place in the school of the teenager that took her life. 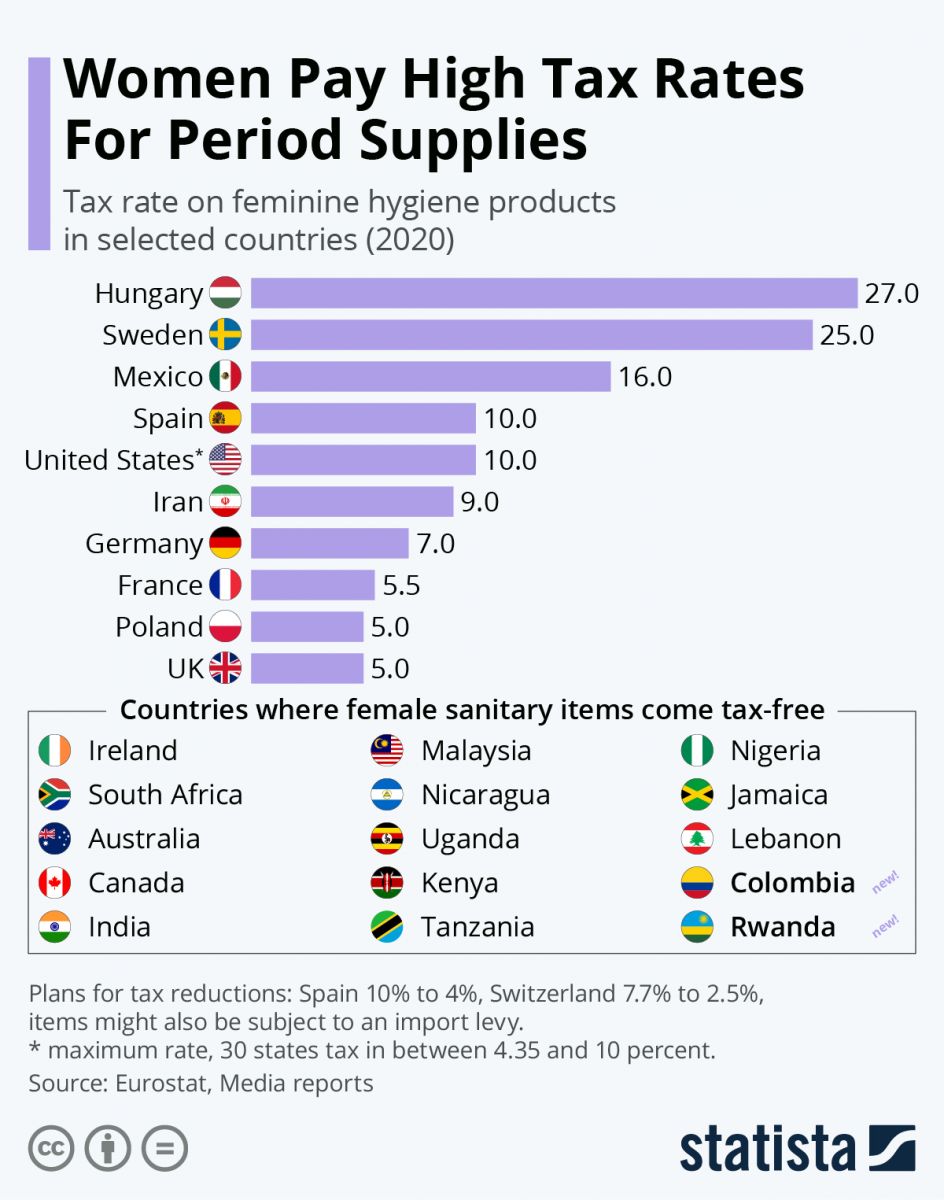 Last February (2020), Scotland became the first country to provide free tampons and pads to its population (13).

In Spain, the government has committed to lowering the tax rate on tampons and pads to 4%. Still, currently there is a 10% tax on them. The same tax rate paid to go to a theme park or a bullfight.

The graph shows the tax rate on pads and tampons in a number of countries in May 2019 (14).

There are a couple of clever proposals to circumvent tax:

The objective of most of these initiatives is to give some visibility to the issue. And it is not surprising, as it is essential to improve the way things are; we must acknowledge menstruation as the biological process that it is, something completely normal. It is time to shed some light on it and do away with the drama; we can be straightforward when talking about the period. Because when we talk openly, the monsters under the bed disappear, and myths fade away. When in the open, information is visible, and that information will be the end of the embarrassment and the distress that half of the world's population experiences or has experienced once a month.

It is time to shed some light on it and do away with the drama; we can be straightforward when talking about the period. Because when we talk openly, the monsters under the bed disappear, and myths fade away. When in the open, information is visible, and that information will be the end of the embarrassment and the distress that half of the world's population experiences or has experienced once a month

Important: The image at the top is from the #MHDAY2020 campaign, created by artist @laura_breiling. The MHDAY website has a lot of related information and research articles in several languages.