Glaciers have carved some of Earth’s most beautiful landscapes by steepening and deepening valleys through erosion. Think of the Scottish Highlands, Yosemite National Park in the US, or the Norwegian Fjords. But big questions remain about how glacial erosion works.

A problem for scientists seeking to understand how glaciers affect the landscape is that the processes of glacial erosion are very complex and not fully understood. For the most part that’s because these processes occur under tens, hundreds or even thousands of metres of ice – we simply can’t observe them.

One mystery is why glaciers erode at different rates. Some glaciers are only able to strip away a hair’s breadth of bedrock each year. Others cut down several centimetres per year, producing huge amounts of sediment that are washed into meltwater streams, lakes or the sea.

Knowing what controls glacial erosion is important because it helps us manage human activity in environments with active glaciers. For example, hydropower schemes can become silted up by the sediment that is spat out of glaciers into meltwater streams. Equally, the safe burial of radioactive waste in countries like Finland, Sweden and Switzerland must consider the possibility that glaciers could grow in the future and dig out any such waste.

On geological timescales, glacial erosion even influences climate because the tiny bits of ground-up rock that are generated by glaciers are more susceptible to chemical weathering. Chemical reactions between the glacial sediment and the air remove CO₂ from the atmosphere, which leads to cooling.

Our latest research shows that the speed at which glaciers move, and the climate in which glaciers exist, control how quickly they cut downward into bedrock. We often talk about things moving at a glacial pace if they are slow, but actually glaciers can be relatively fast. Some, such as Meserve Glacier in Antarctica, will barely move at all each year, but others, like Jakobshavn Isbrae in Greenland, will move as much as 40m a day.

This huge variability in velocity can explain huge differences in erosion. This makes sense – the faster the glacier moves, the more it drags particles over the bedrock below, wearing and tearing it away. But until now there’s been very little evidence to back this up.

Our study has provided that evidence, showing a strong correlation between sliding velocity and erosion rate for many glaciers. This indicates that velocity is a good predictor of how much erosion a glacier can cause.

But then there’s a bigger question of whether there is something even more fundamental that controls glacier speed and erosion.

Recent research suggested that temperature was that underlying factor. Some glaciers (such as in Iceland or Alaska) are actually pretty warm, with temperatures hovering around the freezing/melting point. Others (say, in Antarctica) may have temperatures several tens of degrees below freezing. If a glacier is frozen to the bedrock then it won’t slide anywhere and can’t cause much erosion. Conversely, if it can slide freely over the rock then it will cause lots of erosion.

The role of climate

Until now, nobody had looked at the other really important aspect of climate – precipitation – and its influence on erosion. We gathered information from glaciers all round the world and showed that the most erosive glaciers are those that are in relatively warm climates with lots of snowfall such as Alaska. Glaciers in colder climates with hardly any snowfall, such as Antarctica, cause very little erosion.

This link between climate and glacial erosion has long-lasting effects. Take Scotland - a country with spectacular, but contrasting, landscapes that have been carved by multiple ice sheets and glaciers over the past two million years. In the west are the Scottish Highlands with deep and broad glacier-carved valleys, such as Glen Coe. In the east, there are the Cairngorms, with a broad, high-altitude plateau exhibiting less erosion. The glaciers that sculpted these landscapes probably experienced different climates.

Today, the west of Scotland is wetter because most of the UK’s weather systems come in from the west. In the east, it’s much drier (and sunnier). At times of glaciation, the glaciers in the west may have experienced a milder climate and higher rates of snowfall. So these glaciers were more dynamic, faster, and were able to cut the beautiful valleys that we see today.

In the Cairngorms, it would have been much colder and drier, so the ice cover was less able to cut deep valleys. In many ways, Scotland owes its beauty to glaciers, variable climate and erosion. 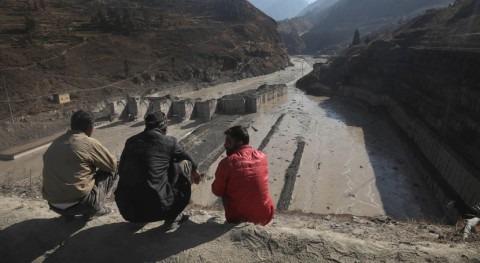