Most of the West Coast of the United States relies on a healthy winter snowpack to provide water through the dry summer months. But when precipitation falls as rain rather than snow, it can diminish summer water supplies, as well as trigger floods and landslides.

A new study in AGU's Journal of Geophysical Research: Atmospheres finds atmospheric rivers –plumes of moisture that deliver much of the west's precipitation—have gotten warmer over the past 36 years.

Warmer atmospheric rivers generally produce more rain than snow, potentially causing problems for the region, according to Katerina Gonzales, an atmospheric scientist at Stanford University and lead author of the new study.

"The west coast relies on atmospheric rivers as a source of precipitation and for much of this region, it's really important that this precipitation falls as snow, rather than rain," she said.

To study whether atmospheric rivers are warming in response to climate change, Gonzales and colleagues at Stanford, University of California-Los Angeles and Colorado State University in Fort Collins turned to 36 years of temperature data collected before, during and after atmospheric river events made landfall on the western U.S.

By combining observational data with models that can track the plumes backwards from where they made landfall to where they originated, the team was able to quantify the temperature of each of the atmospheric rivers that reached the west coast between 1980 and 2016. 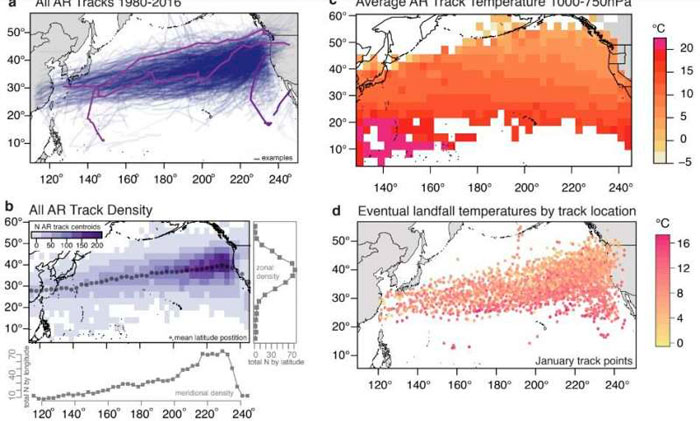 "We found warming of atmospheric rivers at both seasonal and monthly scales," Gonzales said. During the study period, temperatures during landfall rose between 0.69 and 2 degrees Celsius (1.24 to 3.6 degrees Fahrenheit), with the most widespread warming occurring between the months of November and March.

Temperature is a key metric for atmospheric rivers, Gonzales said. Due to thermodynamic properties, warmer air can hold more moisture. But warmer and wetter is not necessarily better, since precipitation falling as snow is important for water storage. Additionally, when rain falls on snow, it can have a destabilizing effect on the snowpack that can lead to enhanced melting, flooding and landslides.

To better understand the underlying causes of this warming trend, Gonzales and colleagues also charted the density and temperature of the atmospheric river events from genesis in the Pacific to landfall in five different regions of the west coast.

"Part of the unique character of atmospheric rivers is that they have been shown to source their moisture as well as their temperature both near landfall and also remotely," Gonzales says. For example, plumes that originate from typhoons in the tropics may carry large amounts of moisture across the Pacific until the system makes landfall. But in the new analysis the authors also found patches of warm ocean waters near the coast can also influence the temperature of the atmospheric river by the time it makes landfall.

"More research is needed to disentangle the factors that are causing this warming trend," Gonzales says. Warming temperatures at sea and at landfall locations may not be the sole influences. "Our analysis suggests that a heterogeneous mix of influences are at work that vary region by region and time of year. The result ends up being a mix of background regional warming and warming over the ocean."

The findings may also have implications for understanding precipitation trends elsewhere in the world. 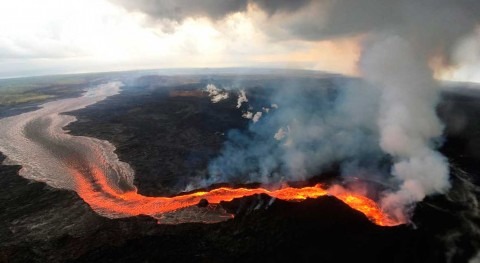 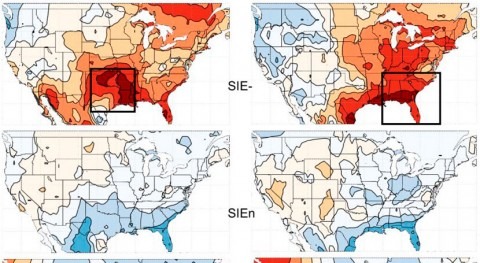