Human daredevils have attempted to go over Niagara Falls in a barrel, but can a fish survive the 190-foot (58-meter) jump—and then go on to mate with different species on the other side?

New research from Museum scientists, published in the journal Molecular Ecology, finds that while some species are able to make it to the other side, native fish populations above and below the falls remain distinct. The finding has important implications for efforts to control invasive aquatic species in the region.

“In the past 50 years or so, aquatic invasive species have expanded in the Great Lakes as a tremendous conservation concern, causing billions of dollars’ worth of damage,” said Nathan Lujan, lead author of the study and a Gerstner Scholar at the Museum. “Both Canadian and American authorities are concerned about the potential impact of these species on the Great Lakes and are very interested in installing barrier technologies in the Niagara River that would slow or stop their spread.”

Since the study’s findings suggest that the falls are, by themselves, an effective barrier against interbreeding, policymakers who are looking to battle invasive species like the round goby using barriers in Niagara’s Welland Canal will not inadvertently interrupt the intermingling of native fish like the largemouth bass. 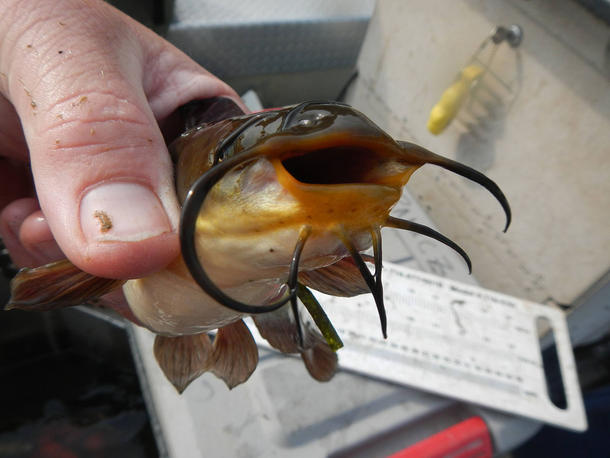 Museum researchers found that fish species, like this brown bullhead (Ameiurus nebulosus), remained genetically distinct on either side of Niagara Falls. © Canada Department of Fisheries and Oceans

For their work, Lujan and colleagues from the University of Toronto at Scarborough and the University of Mississippi looked at DNA from seven native fish species. By examining the genomes of the fishes, they determined that all of the species remained genetically distinct on each side.

They were also able to track the fishes’ migration patterns using models to determine how the DNA of different populations mixed, finding that four species had not migrated past the falls since its formation 11,000 years ago, while two of the species had been able to move beyond the falls.

“These results should reassure policymakers that infrastructure being considered to prevent the movement of invasive aquatic species will not impact native species,” said Lujan.