Aqualia, through its Saudi Arabian subsidiary HAAISCO (Haji Abdullah Alireza & Co. Integrated Services Ltd), has just been selected to operate and maintain the desalination plant and the drinking water distribution system in the Jizan industrial area (Jizan City for Primary and Downstream Industries - JCPDI), in the southwest of Arabia.

The plant has the capacity to produce 60,000 m3 of desalinated water per day, both for drinking and service water, which will be supplied to the industries installed in the industrial hub. Its treatment processes include a dissolved air flotation system, seawater ultrafiltration, reverse osmosis modules and post-treatment to adapt the water to the use requirements. In addition, it has all the auxiliary equipment such as a dosage of reagents, an in situ sodium hypochlorite production system, the corresponding pumping systems and a supply network to the entire pole.

The client, Marafiq, the company responsible for the supply of water and electricity in the Saudi Industrial Areas of Jubail and Yanbu –and now also Jizan–, owned by the Royal Commission, Saudi Aramco, Sabic and the Public Investment Found, has awarded the management of the installations for a period of 3 years through a tendering process and according to strictly technical-economic criteria. 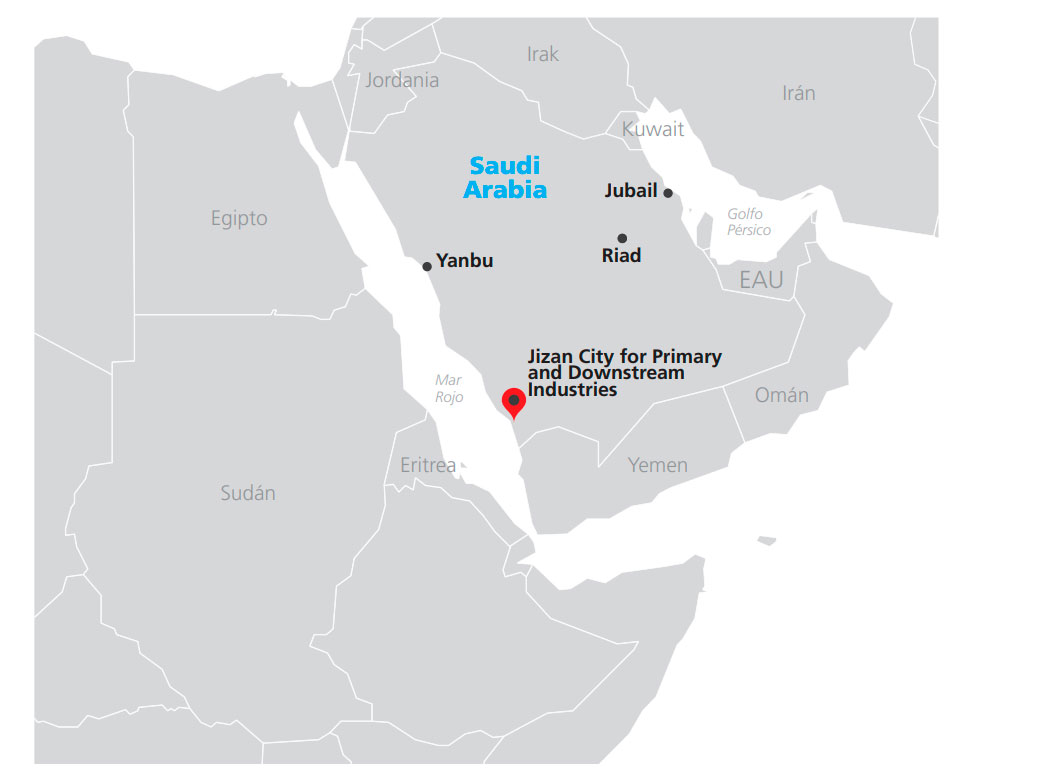 Jizan City for Primary and Downstream Industries is located on the Red Sea coast at the southwestern corner of the Kingdom of Saudi Arabia. This industrial enclave extends along more than 11 kilometres of coast, has a total area of more than 100 km2 and is located next to the third most important harbour in Saudi Arabia on the Red Sea. The pole of Jizan, dedicated to the secondary sector, maintains a strategic location due to its proximity to international maritime routes, houses numerous international transformation companies and constitutes a transcendental enclave for the economic development of the country.

The total value of the contracts currently managed by Aqualia in the Arabian Peninsula (Saudi Arabia, UAE, Qatar and Oman) exceeds 600 million euros. Most of them are concessional and respond to models of public-private-partnerships. This way, Aqualia serves more than six million inhabitants in the region.

These contracts include the operation and maintenance of the sanitation network in the eastern area of Abu Dhabi (city of Al Ain), the operation and maintenance of the sanitation system of Abu Dhabi capital and the adjacent islands of Al Reem, Al Maryah and Al Saadiyat, the management of the hydraulic infrastructures of the Omani port of Sohar or the management of the Al Dhakhira sanitation system in Qatar.

In the MENA Area, Aqualia achieved a turnover of 163 million euros in 2020, which represented almost 14% of its total income.

At the beginning of 2020, Aqualia acquired from the Saudi Arabian group Haji Abdallah Alireza 51% of the company HAAISCO (Haji Abdullah Alireza Integrated Services Ltd) which is in charge of the operation and maintenance of several desalination plants in Arabia. These include the desalination plant at King Abdulaziz International Airport in Jeddah, a concession of the Qatarat Company, of which Aqualia has also acquired a 51% share in the same operation. This initiated an alliance that, in the short term, is already producing relevant successes such as this contract in Jizan.