General220
Berkeley Lab
From the infinite scale of the universe to the infinitesimal scale of subatomic particles, researchers at Lawrence Berkeley National Laboratory – Berkeley Lab – are advancing the scope of human knowledge.
TwitterFacebookLinkedInYoutubeWeb

When you hear about the biological processes that influence climate and the environment, such as carbon fixation or nitrogen recycling, it’s easy to think of them as abstract and incomprehensibly large-scale phenomena. Yet parts of these planet-wide processes are actually driven by the tangible actions of organisms at every scale of life, beginning at the smallest: the microorganisms living in the air, soil, and water.

So, if you want to understand how an ecosystem – be it a tropical forest, an agricultural zone, or a watershed – will fare in the face of natural and human-induced changes, you need to understand what the microbes in that community are up to. But how do you examine the roles that a diverse group of creatures play if you can’t even see them without a microscope?

The best way to do this is to look at their genes, and researchers from Lawrence Berkeley National Laboratory (Berkeley Lab) have developed a new DNA analysis technique that reveals a very interesting, and previously hard-to-study, aspect of a microbial community’s genome.

As described in the journal mBio, a team led by Aindrila Mukhopadhyay has optimized existing methods to isolate plasmids – the small packages of DNA that enable microorganisms like bacteria to quickly acquire and share genes. Often, these DNA molecules, which are separate from the chromosomes, encode functions that can confer a survival advantage in certain situations.

“When you want to learn about a microbial community, focusing specifically on their plasmids allows you to get a sense of the suite of capabilities that a community wants to keep mobile perhaps because they are needed periodically,” said Mukhopadhyay, a senior scientist in Berkeley Lab’s Biological Systems and Engineering Division. And because a microbial community’s collection of plasmid-based genes, aptly called the plasmidome, changes in response to evolutionary pressure much faster than chromosomal genes, looking at this combined pool of genetic information helps scientists construct a vivid picture of the environment beyond that moment in time.

“Studying plasmids is like looking inside someone’s backpack to see what they’re keeping handy to use themselves and potentially share with another person,” Mukhopadhyay elaborated. “Say you look inside and find an umbrella. It may not be raining at the time, but the umbrella suggests that it rains from time to time.”

Existing DNA sequencing and analysis techniques, however, make it hard to separate the plasmidome from the vast library of chromosomal genetic code present in a microbiome sample. To make this task easier, the team worked out a method to detect plasmids of different sizes in bacterial communities of varying density, particularly very low-density environments like groundwater. 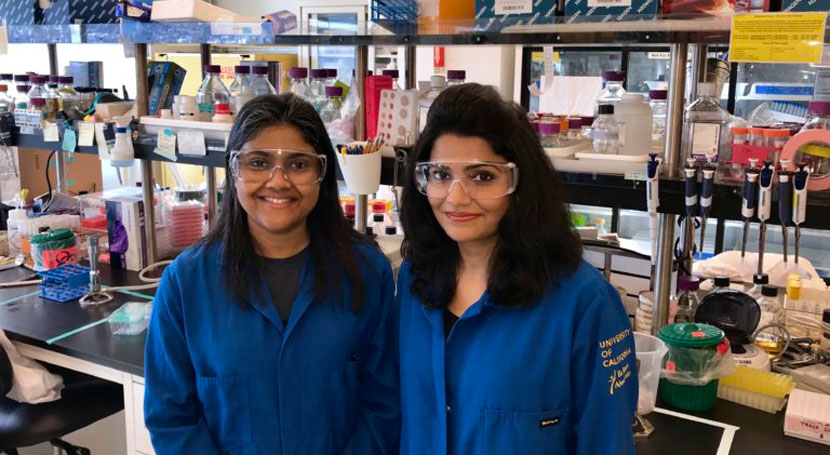 After refining their approach, the scientists applied it to groundwater samples from different wells at the Oak Ridge Field Research Center (ORFRC), a site that is contaminated with heavy metals. Scientists working with ENIGMA – a multi-institute research consortium focused on advancing our fundamental understanding of complex microbial communities – conduct many studies using the unique ORFRC site.

The researchers were intrigued to find that these samples contained hundreds of plasmids, some of which were the largest plasmids reported in any plasmidome study. Furthermore, they discovered that although the types and abundances of bacteria fluctuated dramatically across groundwater samples, the plasmids were often similar. Interestingly, the plasmids found at the highest frequency across samples encoded mercury-resistance genes, yet there was no detectable mercury contamination in the groundwater studied. The presence of these genes reflects the history of this site and shows that its microscopic residents are prepared if mercury is re-encountered.

Moving forward, the team is hopeful that other scientists will use their approach, the details of which are openly shared in the paper, to yield fresh insight into the variety of interesting and influential microbiomes on Earth, including the ones inside our bodies.

“As we study more and more microbiomes, we gain key knowledge that could ultimately be used to manipulate communities for some benefit, such as environmental clean-up, sewage treatment, or improving our health. Other federally funded projects are working toward these goals, and our discovery could be valuable to their work,” said Mukhopadhyay. “Currently, most of these organisms are very different than the lab organisms whose functions and genetics are well documented, and getting a genetic handle on a new species is a big task.”

“But these mobile genetic packages present a way to manipulate these organisms naturally,” added Ankita Kothari, a Biological Systems and Engineering Division project scientist and the lead author of the paper. “So, if you want to go examine an ecosystem at a molecular level and you need genetic tools to do that, the answer could be in the plasmidome already.”

This work was a highly collaborative effort between Berkeley Lab researchers and groups at ORFRC and the DOE Systems Biology Knowledgebase (KBase)  The other contributing authors on this study are Yu-Wei Wu, John-Marc Chandonia, Marimikel Charrier, Lara Rajeev, Andrea Rocha, Dominique Joyner, Terry Hazen, and Steven Singer. The work was conducted as part of ENIGMA, a multi-institute research consortium focused on studying the impact of microbial communities on their ecosystems. ENIGMA is led by Berkeley Lab and funded by the Department of Energy’s Office of Science.