In this interview we discover the initiative 'Caminar El Agua' (Walking the Water), which looks to rediscover rivers, combining movement with knowledge, through routes interpreted by multidisciplinary experts, following water courses in the city or in the rural environment. The various routes are complimented with talks, workshops, concerts and digital content.

We talked to Minty Donald, artist, doctor and professor of Contemporary Performance Practice at the University of Glasgow, and Nick Millar, artist, researcher, technician and producer of theater and performance events. Millar, as an artist-researcher, regularly collaborates with Minty Donald, and Donald has recently undertaken research based on performance as a means of exploring the interrelationships between humans and waterways.

Question: What is your link to the water sector?

Answer: We (Minty Donald and Nick Millar) are artists and researchers who work collaboratively on public art projects that investigate interrelations between people and water, and specifically between people and watercourses. We live in Glasgow, Scotland and Madrid, Spain. Minty is Professor of Contemporary Performance Practice at the University of Glasgow, Scotland. We have been commissioned to undertake projects in Canada, Scotland, Germany, England, Finland and Spain. We have worked with municipal water services, urban planning and architecture departments; water management companies; educational establishments; and community, cutural, arts, and environmental organisations. In these projects, we try to explore the unique material, social, cultural, political and economic dimensions of human-water interdependency in each location, while acknowledging that human-water interdependency is universal. We often do this through devising participatory ‘micro-performances’. These micro-performances are actions that are intended to encourage people to be more attentive to the water they encounter in their day-to-day lives: where it is visible or hidden, how it moves, how it is managed, how it feels, and how it makes them feel. In Spain, we call these micro-performances acciones de aguas (water actions).

Q: How did your connection with the 'Caminar el Agua' project come about, and in what ways do you participate or have participated in it?

A: We heard about Caminar el Agua while we were working on a public art project in Madrid called Aguas Ocultas, Aguas Olvidadas, in collaboration with landscape architect, Malú Cayetano, and supported by CAR- INLAND, Madrid and the University of Glasgow. This project explored people’s relationships with water in the Quintana and La Concepción districts of Madrid, and specifically the hidden or overlooked human-made and natural hydrological infrastructures in that area. We met Camila and Lucia (Caminar el Agua) and discovered that our work had a lot in common. We invited them to take part in some of the events we had organised, like a visit to one of the few accessible natural springs in Madrid, and to talk at a symposium that we organised as part of the Aguas Ocultas, Aguas Olvidadas project.

Camila and Lucia then invited us to take part in a four-day walk down the course of the Manzanares, which they were organising for Madrid Science Week. They invited us to devise some participatory micro-performances for people on the walk, for points on the four-day route. We were really pleased to have the opportunity to be involved in this excellent project. The micro-performances/acciones de aguas that we devised proved very popular with participants on the walk. People joined in enthusiastically and seemed to feel that the acciones brought a new and welcome dimension to their walking experience. The acciones seemed to encouraged people to engage with water in quite personal sensory, emotional, and poetic ways. 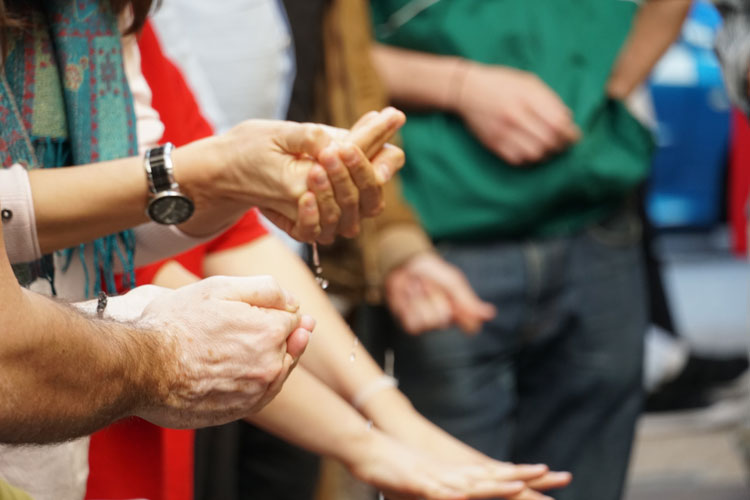 Q: Why do you think it is important to unite movement, knowledge and action that 'Caminar el Agua' promotes?

We think that the combination of the three things is really important and beneficial to the that way people experience, and learn about, the environments that they inhabit. Actually seeing what different experts are talking about is clearer and much more engaging than just looking at illustrations in a book or on a computer screen. Walking along the routes of the watercourses gives people a physical sense of the way water moves through landscape – the undulations of the topography, different types of terrain — they can feel it in their bodies. The micro-performances that we devise are intended to amplify that kind of bodily experience, while also inviting people to reflect on the cultural, social and political aspects of human-water interrelations. It is also, we think, important for people to be together as part of a group where they can chat about what they are seeing and experiencing, and ask questions and have discussions.

Q: How would you evaluate the population's general knowledge about the river courses of their cities?

A: We can speak about watercourses in the two cities we know best: Madrid and Glasgow, Scotland.

We remember our first visit to Madrid, before the Parque Lineal del Manzanares was made. We tried to visit the Rio Manzanares in the city but of course it was impossible as it was sandwiched between the lanes of the M-30. It has been wonderful to see the river made accessible and become an important green-blue space in Madrid. It is obviously very well used, as a place to walk, exercise and relax. The popularity of the Rio Manzanares Caminar el Agua demonstrated a real appetite to find out more about different aspects of this river.

Our project in northeast Madrid, Aguas Ocultas, Aguas Olvidadas suggested that people in that part of the city had little knowledge or awareness of the local hydrological infrastructure. The network of streams, rivers, springs and viajes de agua (a system of underground water channels constructed to collect drinking water) that once characterised the area (due to the aquafer’s relative closeness to the surface) have been culverted or buried in the course of urbanisation. Most people did not know of their existence, or that this part of Madrid once provided much of the drinking water for the city. Local names, such as Parque Calero, are all that are visible of these lost waterways. Through our project, local people’s knowledge of their neighbourhood’s watery heritage was enhanced and their interest piqued in this important but largely forgotten part of the area’s identity.

In Glasgow, the city’s major river, The Clyde, is well-known but mostly for its heritage as an industrial river that supported shipbuilding and other heavy manufacturing. Not many people are aware that the Clyde was once wide and shallow. It now has steep stone walls on either side that are a little like those of the Manzanares in central Madrid. Many people don’t notice that the water of the Clyde rises and falls up to 5 metres twice daily with the tide! We made a public art project about this. A lot of the other streams that flowed into the Clyde in Glasgow have been buried or become part of the sewage system. As in Madrid, people are not really aware of these hidden watercourses. 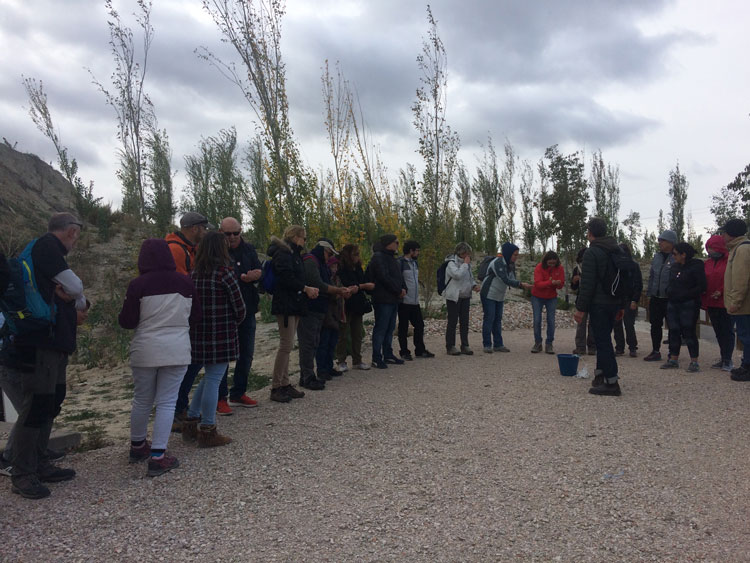 Q: In this sense, how do you think initiatives like this help?

A: Activities like Caminar el Agua, and other creative initiatives like Aguas Ocultas, Aguas Olvidadas, and projects by our collaborator in Madrid, Malú Cayetano, can really help people to understand and become much more aware of water in urban and rural environments. People who have taken part in our micro performances/ acciones de aguas often say that they think and feel differently about water in their everyday lives, after participating. They are more attentive to water, they notice how it moves and changes, they think about the complex systems and infrastructures through which water is managed. Some have said that they realise how much they took water for granted and that they are now more sensitive to their rights to access it, or that they are more aware that water can be a powerful force in urban and rural environments.

People who have taken part in our micro performances/ acciones de aguas often say that they think and feel differently about water in their everyday lives, after participating

Q: What arguments would you give someone to encourage them to participate in this type of activity?

First, we’d say that these activities are fun! They are informative, without feeling intimidating. There is space for people to ask questions and share their own knowledge, as well as hearing from experts in different fields. They can be good opportunities to meet people who have shared interests. We’d say that the walks, talks and participatory micro-performances can be very enjoyable ways of experiencing new environments, or experiencing familiar environments in new ways. About the acciones de aguas in particular, we’d encourage people to try them, taking an open, curious, and playful but thoughtful approach. They might find that in doing the acciones their attitudes towards water and other nonhuman things have shifted, even just a little.