One of the current mysteries of climate science surrounds the widely accepted evidence that during the planet’s most recent past natural warm period, about 128,000 to 117,000 years ago, global sea levels peaked as high as 6 to 9 meters (20 or 30 feet) higher than today. And, during that so-called last interglacial, temperatures were just 1or 2 degrees C (1.8 to 3.6 F) warmer than those of preindustrial times—marks we may surpass by century’s end, if not sooner. Such a deluge could have been produced only by collapses of  the Greenland and/or Antarctic ice sheets. If that happens now, it will drown much of the human world. Yet, at least so far, models of future sea level rise generally hover around a meter or so within the next 100 years. What are we missing, and how much should it scare us?

In a new study, a team at Columbia University’s Lamont-Doherty Earth Observatory believes they have an answer: They say that researchers examining signs of past sea levels along various coasts may have failed to accurately correct for long-term ups and downs of the land itself. Based on newly sophisticated measurements made across the Bahamas along with new methods of analyzing data, the researchers produced lower—though still daunting—estimates for the last interglacial. They say seas peaked at least 1.2 meters (4 feet) higher than today—roughly in line with most current models for the next 100 years of so. However, they say, levels could have been higher. An unlikely upper limit, they say, is 5.3 meters (17 feet). The study appears this week in the Proceedings of the National Academy of Sciences.

“To get to 9 meters of sea level rise, you’d have to melt large parts of Greenland and Antarctica,” said lead author Blake Dyer. “This suggests that didn’t happen. So maybe we should feel not as bad about the future. On the other hand, our lower estimate is bad, and our upper one is really bad.”

Key to the new study: the fact that as ice sheets build, they depress the land beneath them. The ice that covered northern North America during the last glaciation up to around 15,000 years ago squashed the land down hundreds of meters. But the Earth is elastic: What goes down in one place goes up someplace else, like when you squeeze a rubber ball or an inner tube. These corollary deformations outside the icy regions are still poorly understood; they may creep for hundreds or thousands of miles over hundreds or thousand of years. They move mainly in the pliable mantle, some 100 to 1,000 kilometers down, before bulging back on the surface. Then, when the ice melts, the process goes in reverse; previously ice-covered regions rebound, while those on the fringes sink, in slow seesaw fashion.

Obviously, such movements, known as glacial isostatic rebound, can skew estimates of past water levels, and climate scientist have been struggling to accurately adjust for them. For instance, previous studies have suggested that topographic ripples from North America’s glaciations have traveled down the U.S. East Coast and reached all the way to the Bahamas archipelago. This pushed the islands upward when the ice was high, and slowly eased them back down when the ice melted. But exactly how much, and when, was not clear. To find out more, the researchers studied the islands’ coastal deposits in great detail.

The Bahamas run north to south for 1,200 kilometers, which makes them ideal for the study of glacial isostatic rebound. Theoretically, cycles of bulging and subsidence would be greater closer to the ice, and peter out further south, as evidenced in the islands’ coastal deposits. This is exactly what the researchers found. 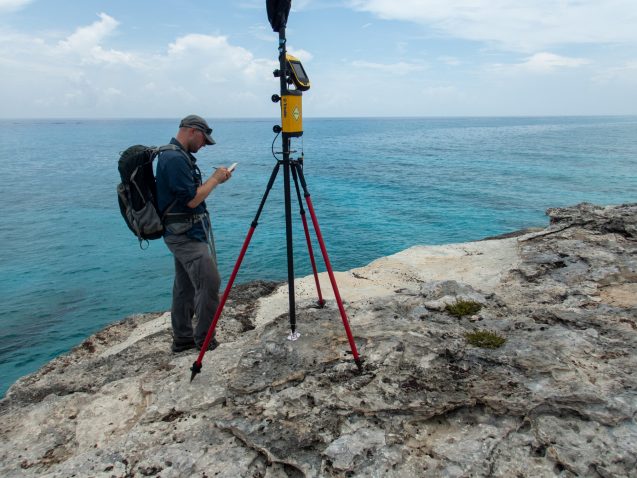 Trekking along the coasts of seven islands, the team exactly measured the elevations of different kinds of geologic formations, including fossil coral reefs; fossilized edges of ancient beaches and nearshore sand deposits; and fossil sand dunes. They found similar sequences of similar ages on each island—but their elevations varied according to latitude. This meant the variations could not have been produced by water levels alone; movements of the land had to be considered. Putting all the measurements together, they concluded that islands to the north probably sank as much as 10 meters during the interglacial, while those to the south sank only about 6 meters. They combined these findings with hundreds of different models of how glacial isostatic rebound could have traveled through the Earth, and converted the calculations into global sea levels. This produced the new, lower estimates.

“A lot of what we estimate for the future is based on what we observe from the past, so this directly affects our projections,” said coauthor Jacqueline Austermann, a geodynamicist at Lamont-Doherty. “If our lower estimates are true, the implication is that the ice sheets will respond to warming, but maybe not as dramatically as we thought.”

One catch to the study: evidence for the much higher estimates of sea level rise during the last interglacial comes from many other places, including the Mediterranean, the Indian Ocean and Australia. The authors of the new study argue that the previous analyses could be based in part on a faulty premise that the ice sheet covering North America before 128,000 years ago was the same size as the more recent one. The new study suggests that in fact the previous ice sheet was smaller, and this could have affected calculations at other sites. Previous estimates could also be affected by assumptions about the size of the separate ice sheet that covered Scandinavia, northern Europe and northwest Russia. 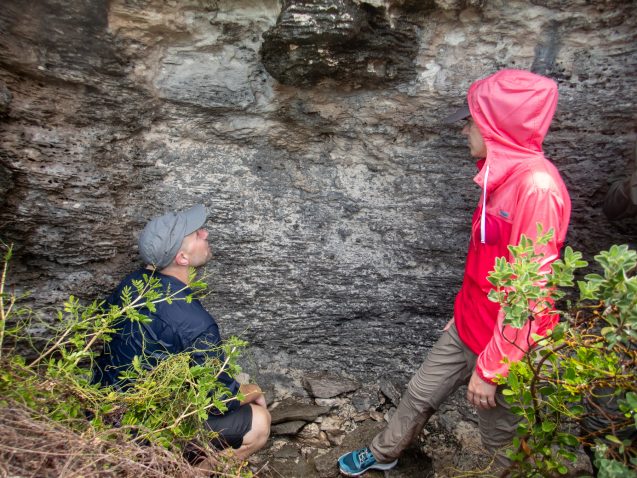 For researchers William D’Andrea and Jacqueline Austermann, a small cave on Crooked Island offers shelter from rain, and a close look at fossilized ripples formed on an ancient sand dune. (Blake Dyer)

Also, the warm temperatures of the last interglacial were slowly produced by variations in Earth’s orientation to the sun over thousands of years, and may not have affected both poles simultaneously. Study coauthor Maureen Raymo, director of Lamont-Doherty and a co-dean of the new Columbia Climate School, said this could mean that when some polar regions were losing ice, others might have been gaining. This would have helped balance things out and limit global sea level rise. “This is still a question. Models of ice sheets are still in their toddlerhood,” she said. She points out that human carbon emissions are now heating the globe far more rapidly and evenly than during the last interglacial, so there is no guarantee of any such buffer. “That makes it more difficult to apply the results to today,” she said. “The easy thing to say would be, ‘Oh we showed that sea levels were not so bad, and that’s terrific.’  The harder answer, the more honest answer, is that maybe things were different then, and we’re not in the clear.”

The study is not the first to come up with lower sea level estimates for the last interglacial. Last year, a study led by Peter Clark of Oregon State University suggested that levels might have risen in the neighborhood of 4 meters. However, that study was based strictly on modeling, not new geologic evidence, as with the new study.

Robert Kopp, a climate scientist at Rutgers University whose work is widely cited as evidence for the much higher sea levels of the last interglacial, said the study “should inspire substantial critical evaluation of what we understand—or what we think we understand—about the last interglacial. Given that it is based on a single region, I think it should be viewed as an alternative hypothesis to the prevailing assessment [rather] than as the new best estimate.” He said the next step would be re-examine other regions.

The researchers plan to do that, and already are looking into new evaluations of sites in Denmark, France, England and South Africa.

Robert DeConto, a scientist at the University of Massachusetts, Amherst who studies polar climate change, said of the study, “My guess is that this isn’t the last word on [last interglacial] sea level. Considerable uncertainty, and the possibility of much higher sea level than 1.2 meters remains.”

One thing is certain: glacial isostatic rebound is still at work. In our current interglacial, the Bahamas at this point seem to be sinking only imperceptibly, but this is not the case along the U.S. East Coast. In many areas, the Atlantic Ocean is rising 1 to 2 millimeters a year. At the same time, the coast is sinking an equivalent amount, in reaction to the melting of the ice sheet further north thousands of years ago. Flooding from the resulting double whammy can already be seen in many areas.

The study’s other authors are William D’Andrea, Roger Creel, Michael Sandstrom and Miranda Cashman, all of Lamont-Doherty Earth Observatory; and Alessio Rovere of the University of Bremen. Blake Dyer is now based at the University of Victoria, in British Columbia, Canada. The study was supported by the U.S. National Science Foundation.