General333
Elife
eLife is a non-profit organisation created by funders and led by researchers. Our mission is to accelerate discovery by operating a platform for research communication that encourages and recognises the most responsible behaviours.
TwitterFacebookLinkedInWeb

Researchers have used the world's smallest, smartphone-sized DNA sequencing device to monitor hundreds of different bacteria in a river ecosystem.

Writing in the journal eLife, the interdisciplinary team from the University of Cambridge, UK, provide practical and analytical guidelines for using the device, called the MinION (from Oxford Nanopore Technologies), to monitor freshwater health. Their guidelines promise a significantly more cost-effective and simple approach to this work outside the lab, compared to existing methods.

Rowers and swimmers in Cambridge are regularly affected by waterborne infections such as Weil's disease, sometimes leading to public closures of the city's iconic waterways. Monitoring the microbial species in freshwater can help indicate the presence of disease-causing microorganisms and even water pollution. But traditional tests for freshwater bacteria often require well-equipped laboratories and complex methods for growing colonies of individual bacterial species.

"The direct measurement of all bacterial DNA traces in freshwater, an approach known as metagenomics, is a valuable alternative, but still requires large, expensive equipment that can be hard to operate," says Andre Holzer, co-first author and Ph.D. student at the Department of Plant Sciences, University of Cambridge. "We aimed to describe the bacterial species present in the River Cam using the new portable DNA sequencing technology." 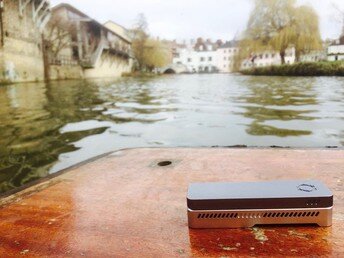 The MinION is a portable device that can sequence genetic material sampled from the environment – here, from the River Cam in Cambridge, UK. Credit: Team PuntSeq (CC BY 4.0)

The team used the MinION device to sequence the DNA of entire groups of microorganisms found in water samples from the River Cam. But before they could use the sequence data, they needed to optimize their experimental methods and analysis software. "It was essential to account for the quality of this new type of bacterial DNA sequence information," Holzer explains. "We tested many different algorithms for processing the data to find the most accurate methods."

The researchers then used their optimized guidelines to analyze the data and successfully measure the proportions of hundreds of different bacterial species present in the water. They took samples from nine different sites along the river, often sampling the sites at three different time points so they could compare the proportions of species in different locations and seasons.

The team was also able to distinguish closely related, harmful microbial species from non-harmful ones. By comparing the samples from different locations, they found that there were more potentially harmful bacteria and those associated with wastewater downstream of the most built-up, urban areas of the river. Chemical follow-up analyzes of the water samples collected from the same urban areas revealed a matching trend of increasing wastewater pollution in those areas.

"Our work shows how MinION and the associated DNA sequencing technology can be used in the effective monitoring of freshwater health," says Lara Urban, co-lead investigator of the work and now an Alexander von Humboldt Research Fellow at the University of Otago, New Zealand. "This expands on the technology's existing applications which include the accurate tracing of viral transmissions between patients during the recent Ebola, Zika and SARS-CoV-19 virus outbreaks."

"We hope our results will encourage other independent scientists and collectives to engage in simplified freshwater management and biodiversity tests around the globe,"concludes senior author Maximilian Stammnitz, a Ph.D. student at the Department of Veterinary Medicine, University of Cambridge.