Latest images reveal that the A-68A iceberg has shattered into multiple pieces, with two large fragments of ice breaking off from the main berg and floating away in the open ocean. Scientists using satellite data have not only been monitoring the iceberg’s journey across the South Atlantic Ocean, but have been studying the iceberg’s ever-changing shape.

The colossal A-68A iceberg – one of the largest bergs of all time – has drifted slowly northwards since it broke free from the Larsen-C ice shelf in July 2017, and has been floating perilously close to South Georgia for the past month.

Marine scientists are concerned that its presence will harm the fragile ecosystem that thrives around the island, either through scraping of the iceberg’s keel on the seabed or through the massive release of cold freshwater into the surrounding ocean. Just how close the berg will reach depends on how deep its keel is, but only with measurements of the berg’s changing shape, this has been impossible to determine with confidence.

Using data from four different satellites, scientists from the Centre for Polar Observation and Modelling at the University of Leeds have produced the first assessment of the iceberg's changing shape.

The team first built a map of the icebergs initial thickness from measurements recorded by ESA’s CryoSat satellite radar altimeter in the 12 months before it calved. This detailed map reveals that A-68 was originally, on average, 232 m thick, and 285 m at its thickest point. The berg has 30 m deep channels oriented parallel to its narrow side following the direction Larsen ice shelf was flowing out to sea before it snapped – a common feature related to ocean melting.

Since it has been drifting in the ocean, the iceberg's position and shape have been captured in a sequence of 11 images taken by two different satellites – the Copernicus Sentinel-1 mission, which has an all-weather and year-round imaging radar, and NASA’s MODIS, which records images that are visible to the naked eye.

The imagery shows that the iceberg has halved in size from an initial area of 5664 sq km to its present extent of just 2606 sq km. A large proportion of this loss has been through the creation of smaller bergs, some of which are still afloat. 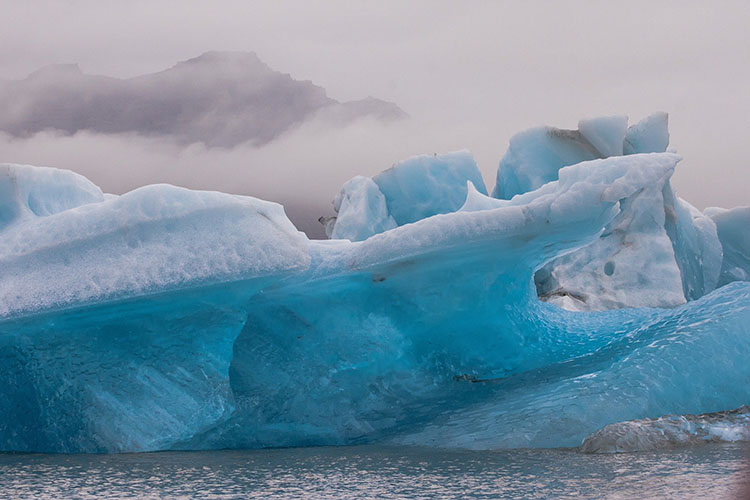 Profiles of the iceberg’s height have also been recorded on eight separate occasions as it has drifted and rotated in the ocean by CryoSat and by NASA’s ICESat-2 laser altimeter, which has been in orbit since September 2018. The coincident satellite imagery made it possible to orientate the altimeter height profiles relative to the icebergs initial position and calculate its change in thickness over time.

On average, the iceberg has thinned by 32 m, and by over 50 m in places – around a quarter of its initial thickness. When combined, the change in thickness and area amount to a 64% reduction in the iceberg’s volume from 1467 to 526 cubic kilometres.

The iceberg's future trajectory depends on how deep its keel is relative to the surrounding ocean. Although South Georgia lies in a remote spot of the South Atlantic Ocean, it is surrounded by relatively shallow shelf waters that extend tens of kilometres beyond its coastline.

At its thickest section, the A-68A iceberg currently has a 206 m deep keel, and so the main section is unlikely to travel much closer to the island until it thins or breaks apart. However, two relatively large fragments which broke away on 21 December are considerably thinner, with keels that are up to 50 m shallower, and so these pose the greatest immediate threat.

Since it broke free, the average melting rate of A-68 has been 2.5 centimetres per day and the berg is now shedding 767 cubic metres of freshwater per second into the surrounding ocean – equivalent to 12 times the outflow of the River Thames.

The team will continue to monitor A-68A and its remnant parts as part of their ongoing assessment of Earth’s polar regions.

Anne Brackmann-Folgmann, PhD student at the University of Leeds, said, “Icebergs can have major environmental impacts, including disturbing ocean circulation, marine ecosystems, and could block the route between penguin colonies and their feeding grounds during the breeding season. Thanks to CryoSat, we can track changes in their thickness, providing advance warning of when and where they might run aground.”

Jamie Izzard, postgraduate researcher at the University of Leeds, said, “Satellite altimeters allow us to measure iceberg terrain with incredible precision, allowing us to detect subtle features like the shallow surface depression above the basal channel which was the line of weakness along which the latest bergs calved.”

ESA’s CryoSat Mission Manager, Tommaso Parrinello, said, “It’s fantastic to know that even in the remotest parts of our planet, satellites like CryoSat are able to shed light on events like this and help us to monitor our environment and thanks to the recent change of CryoSat orbit to sync with ICESat-2, we will see more results in the future coming from the combination of the two satellite measurements.”