The water, which is hidden beneath Mars’ surface, was found by the Trace Gas Orbiter (TGO)’s FREND instrument, which is mapping the hydrogen – a measure of water content – in the uppermost metre of Mars’ soil.

While water is known to exist on Mars, most is found in the planet’s cold polar regions as ice. Water ice is not found exposed at the surface near the equator, as temperatures here are not cold enough for exposed water ice to be stable.

Missions including ESA’s Mars Express have hunted for near-surface water – as ice covering dust grains in the soil, or locked up in minerals – at lower latitudes of Mars, and found small amounts. However, such studies have only explored the very surface of the planet; deeper water stores could exist, covered by dust.

“With TGO we can look down to one metre below this dusty layer and see what’s really going on below Mars’ surface – and, crucially, locate water-rich ‘oases’ that couldn’t be detected with previous instruments,” says Igor Mitrofanov of the Space Research Institute of the Russian Academy of Sciences in Moscow, Russia; lead author of the new study; and principal investigator of the FREND (Fine Resolution Epithermal Neutron Detector) neutron telescope.

“FREND revealed an area with an unusually large amount of hydrogen in the colossal Valles Marineris canyon system: assuming the hydrogen we see is bound into water molecules, as much as 40% of the near-surface material in this region appears to be water.” 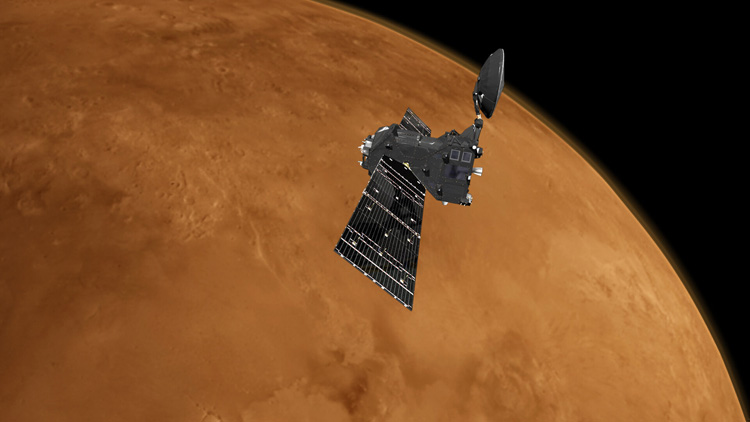 The water-rich area is about the size of the Netherlands and overlaps with the deep valleys of Candor Chaos, part of the canyon system considered promising in our hunt for water on Mars.

Igor and colleagues analysed FREND observations ranging from May 2018 to February 2021, which mapped the hydrogen content of Mars’ soil by detecting neutrons rather than light.

“Neutrons are produced when highly energetic particles known as ‘galactic cosmic rays’ strike Mars; drier soils emit more neutrons than wetter ones, and so we can deduce how much water is in a soil by looking at the neutrons it emits,” adds co-author Alexey Malakhov, also of the Space Research Institute of the Russian Academy of Sciences. “FREND’s unique observing technique brings far higher spatial resolution than previous measurements of this type, enabling us to now see water features that weren’t spotted before.

“We found a central part of Valles Marineris to be packed full of water – far more water than we expected. This is very much like Earth’s permafrost regions, where water ice permanently persists under dry soil because of the constant low temperatures.”

This water could be in the form of ice, or water that is chemically bound to other minerals in the soil. However, other observations tell us that minerals seen in this part of Mars typically contain only a few percent water, much less than is evidenced by these new observations. “Overall, we think this water more likely exists in the form of ice,” says Alexey. 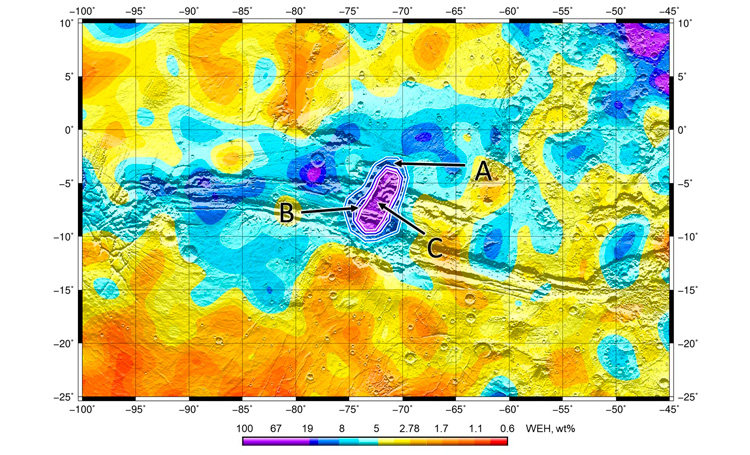 Water ice usually evaporates in this region of Mars due to the temperature and pressure conditions near the equator. The same applies to chemically bound water: the right combination of temperature, pressure and hydration must be there to keep minerals from losing water. This suggests that some special, as-yet-unclear mix of conditions must be present in Valles Marineris to preserve the water – or that it is somehow being replenished.

“This finding is an amazing first step, but we need more observations to know for sure what form of water we’re dealing with,” adds study co-author Håkan Svedhem of ESA’s ESTEC in the Netherlands, and former ESA project scientist for the ExoMars Trace Gas Orbiter.

“Regardless of the outcome, the finding demonstrates the unrivalled abilities of TGO’s instruments in enabling us to ‘see’ below Mars’ surface – and reveals a large, not-too-deep, easily exploitable reservoir of water in this region of Mars.”

As most future missions to Mars plan to land at lower latitudes, locating such a reservoir of water here is an exciting prospect for future exploration.

While Mars Express has found hints of water deeper underground in Mars’ mid-latitudes, alongside deep pools of liquid water under Mars’ south pole, these potential stores lie up to a few kilometres below ground, making them less exploitable and accessible to exploration than any found just below the surface.

The finding also makes Valles Marineris an even more promising target for future human exploration missions to the planet. The largest canyon in the Solar System, Valles Marineris is arguably Mars’ most dramatic landscape, and a feature that is often compared to Earth’s Grand Canyon – despite being some ten times longer and five times deeper. 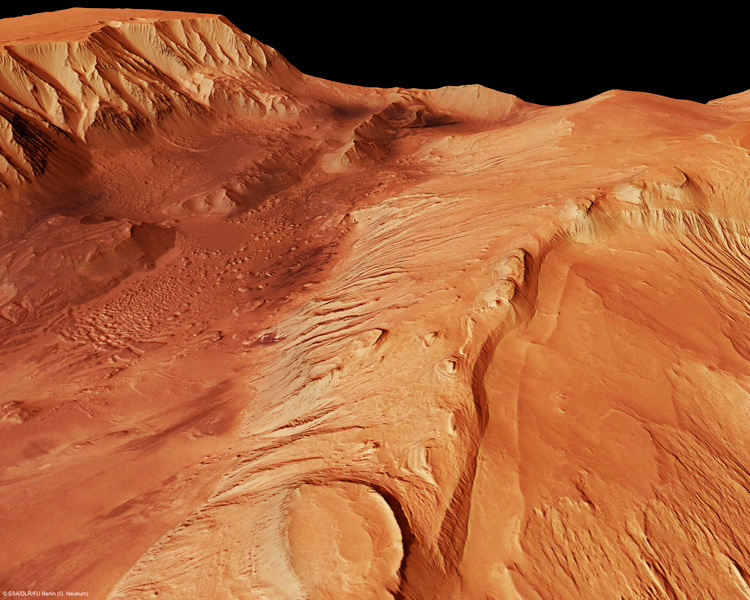 “Knowing more about how and where water exists on present-day Mars is essential to understand what happened to Mars’ once-abundant water, and helps our search for habitable environments, possible signs of past life, and organic materials from Mars’ earliest days.”

TGO launched in 2016 as the first of two launches under the ExoMars programme. The orbiter will be joined in 2022 by a European rover, Rosalind Franklin, and a Russian surface platform, Kazachok, and all will work together to understand whether life has ever existed on Mars.