A new map of Mars is changing the way we think about the planet's watery past, and showing where we should land in the future.

Specifically, the map shows the locations and abundances of aqueous minerals. These are from rocks that have been chemically altered by the action of water in the past, and have typically been transformed into clays and salts.

On Earth, clays form when water interacts with rocks, with different conditions giving rise to different types of clays. For example, clay minerals such as smectite and vermiculite form when relatively small amounts of water interact with the rock and so retain mostly the same chemical elements as the original volcanic rocks. In the case of smectite and vermiculite those elements are iron and magnesium. When the amount of water is relatively high, the rocks can be altered more. Soluble elements tend to be carried away leaving behind aluminum-rich clays such as kaolin. 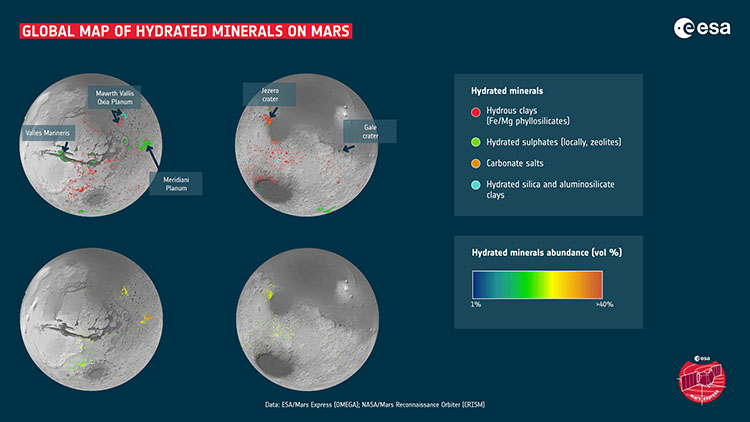 The big surprise is the prevalence of these minerals. Ten years ago, planetary scientists knew of about 1,000 outcrops on Mars. This made them interesting as geological oddities. However, the new map has reversed the situation, revealing hundreds of thousands of such areas in the oldest parts of the planet.

"This work has now established that when you are studying the ancient terrains in detail, not seeing these minerals is actually the oddity," says John Carter, Institut d'Astrophysique Spatiale (IAS) and Laboratoire d'Astrophysique de Marseille (LAM), Université Paris-Saclay and Aix Marseille Université, France.

This is a paradigm shift for our understanding of the red planet's history. From the smaller number of aqueous minerals that we previously knew were present, it was possible that water was limited in its extent and duration. Now, there can be no doubt that water played a huge role in shaping the geology all around the planet.

Now, the big question is whether the water was persistent or confined to shorter, more intense episodes. While not yet providing a definitive answer, the new results certainly give researchers a better tool for pursuing the answer.

"I think we have collectively oversimplified Mars," says John. He explains that planetary scientists have tended to think that only a few types of clays minerals on Mars were created during its wet period, then as the water gradually dried up, salts were produced across the planet.

This new map shows that it's more complicated than previously thought. While many of the Martian salts probably did form later than the clays, the map shows many exceptions where there is intimate mixing of salts and clays, and some salts that are presumed to be older than some clays.

"The evolution from lots of water to no water is not as clear cut as we thought, the water didn't just stop overnight. We see a huge diversity of geological contexts, so that no one process or simple timeline can explain the evolution of the mineralogy of Mars. That's the first result of our study. The second is that if you exclude life processes on Earth, Mars exhibits a diversity of mineralogy in geological settings just as Earth does," he says.

In other words, the closer we look, the more complex Mars's past becomes. 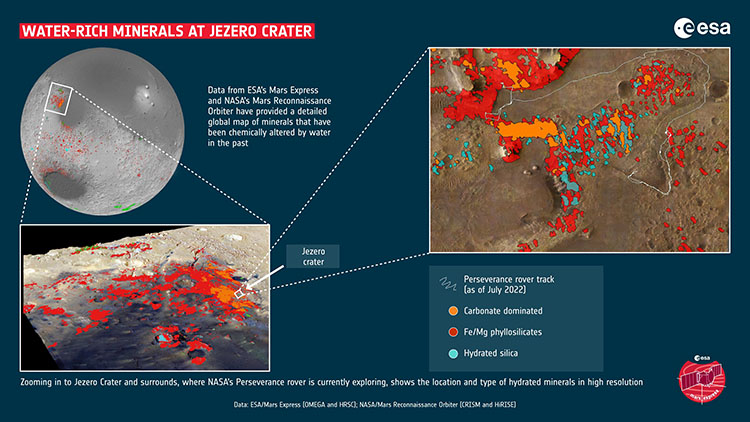 Jezero crater and its surroundings on Mars display a rich array of minerals that have been altered by water in the planet’s past. These minerals are predominately clays and carbonate salts. Of the minerals identified in this particular region, carbonate is a salt, Fe/Mg phyllosilicates are iron- and magnesium-rich clays, and hydrated silica is a form of silicon dioxide that forms the gemstone opal on Earth. The close-up data were obtained from a global map of minerals produced by ESA’s Mars Express and NASA’s Mars Reconnaissance Orbiter. NASA’s Perseverance rover, which landed on Mars in 2020, is currently exploring Jezero crater and its surroundings. Credit: ESA/Mars Express (OMEGA and HRSC) and NASA/Mars Reconnaissance Orbiter (CRISM and HiRISE)

The OMEGA and CRISM instruments are ideally suited to this survey. Their datasets are highly complementary, working over the same wavelength range, and sensitive to the same minerals. CRISM uniquely provides high resolution spectral imaging of the surface (down to 15m/pixel) for highly localized patches of Mars, and makes it the most suitable for mapping small regions of interests, such as rover landing sites. For example, the mapping shows that Jezero crater where NASA's 2020 Perseverance rover is currently exploring, displays a rich variety of hydrated minerals.

OMEGA, on the other hand, provides global coverage of Mars at higher spectral resolution and with a better signal-to-noise ratio. This makes it better suited for global and regional mapping, and discriminating between the different alteration minerals.

The results are presented in a pair of papers published in Icarus and written by John, Lucie Riu and colleagues. Lucie was at the Institute of Space and Astronautical Science (ISAS), Japanese Aerospace eXploration Agency (JAXA), Sagamihara, Japan, when part of the work was performed but is now an ESA Research Fellow at ESA's European Space Astronomy Center (ESAC) in Madrid.

With the basic detections in hand, Lucie decided to take the next step and quantify the amounts of the minerals that were present. "If we know where, and in which percentage each mineral is present, it gives us a better idea of how those minerals could have been formed," she says. 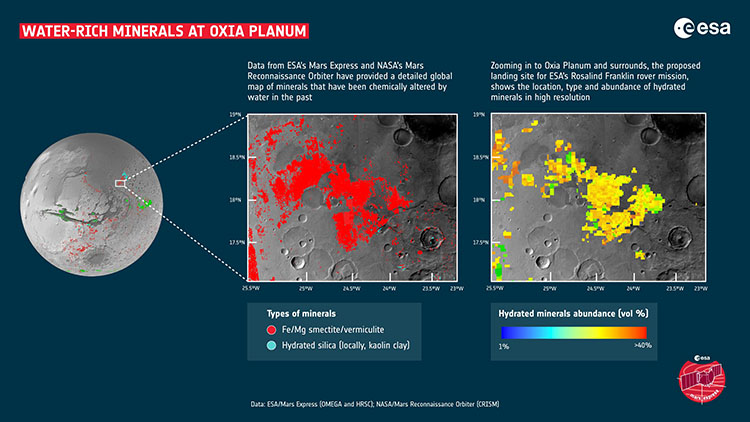 As part of constructing a new global map of Mars minerals, the Oxia Planum region was discovered to be rich in clays. These clays included the iron- and magnesium-rich minerals of smectite and vermiculite, and locally kaolin, which is known on Earth as china clay. Hydrated silica is also mapped over an ancient delta in Oxia. The close-up data were obtained from a global map of minerals produced by ESA’s Mars Express and NASA’s Mars Reconnaissance Orbiter. Because clays are formed in water-rich environments it makes these site excellent locations to study for clues as to whether life once began on Mars. Oxia Planum was selected as the landing site for ESA’s Rosalind Franklin rover. Credit: ESA/Mars Express (OMEGA and HRSC) and NASA/Mars Reconnaissance Orbiter (CRISM)

Second, even before humans go to Mars, the aqueous minerals provide fantastic locations in which to perform science. As part of this mineral mapping campaign, the clay-rich site of Oxia Planum was discovered. These ancient clays include the iron and magnesium rich minerals of smectite and vermiculite. Not only can they help unlock the planet's past climate, but they are perfect sites to investigate whether life once began on Mars. As such, Oxia Planum was proposed and finally selected as the landing site for ESA's Rosalind Franklin rover.

"This is what I am interested in, and I think this kind of mapping work will help open up those studies going forward," says Lucie.

As ever when dealing with the Mars, the more we learn about the planet, the more fascinating it becomes.