Omnipresence of microplastics in European rivers

Over a period of 6 months, from May to November 2019, the research schooner Tara voyaged along the 4 European sea fronts and took samples from 9 major rivers in Europe. This is the very first mission dedicated to investigating plastic pollution in rivers on a European scale. The project was initiated by the Tara Ocean Foundation, in partnership with 16 research laboratories and coordinated scientifically by the CNRS. Our objectives: to identify sources of pollution; learn about the fragmentation of microplastics in rivers; predict their dispersion towards the ocean; understand their impacts on marine biodiversity and effects on the food chain. Marine biologists, ecotoxicologists, oceanographers, modelers, chemists and physicists make up the interdisciplinary team collectively involved in this vast European survey.

Returning to their home port of Lorient on November 23, sailors and scientists aboard Tara brought back 2,700 samples collected during a period of 6 months at 45 sites located between land and sea, on the Thames, Elbe, Rhine, Seine, Ebro, Rhone, Tiber, Garonne, and Loire rivers. Samples and data were collected offshore of 9 estuaries; at the mouth of each river; downstream and upstream of the first heavily populated city located on each river. 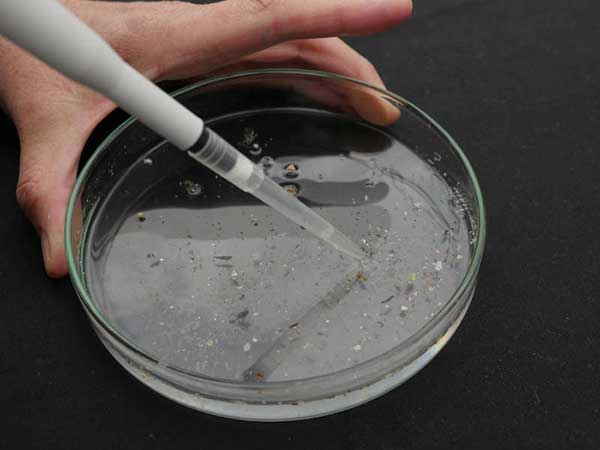 Microplastics are ubiquitous in rivers: a hypothesis is validated

100% of the water samples taken in the 9 European rivers contained microplastics. The hypothesis that microplastics are ubiquitous in rivers is validated. Among these samples, and not surprisingly, are microbeads present in certains cosmetics, toothpastes, etc.  But also a high proportion of fragments visible to the naked eye—called  “secondary microplastics”, resulting from fragmentation of plastics due in particular to the sun’s rays.

Less than 5 mm, these microplastics represent more than 90% of the 5,000 billion pieces of plastic floating on the surface of our oceans.  ”This first observation sheds new light on our vision of plastic pollution at sea. We have long thought that the transformation of plastics into microplastics took place at sea, under the effect of the sun and waves. In fact, the process also seems to occur in rivers and their watersheds. Research now beginning in the 15 partner laboratories will allow us to better understand the phenomena of plastic fragmentation, quantify what comes from rivers, and evaluate the nature of the plastics in order to orient the measures to be taken,” says Jean-François Ghiglione, CNRS, scientific director of the mission.

Microplastics absorb pollutants and can have significant toxicity

The other major observation resulting from this mission concerns the toxicity of microplastics in rivers. During the mission, traps containing different types of plastic were deliberately immersed. These plastics showed no sign of toxicity before immersion, but after a one-month stay in the rivers, their toxicity had become positive. We already know that some plastics give off additives (including endocrine disrupters such as bisphenols A and phthalates), but some “control” plastics were also found to be “pollutant sponges”. Transported towards the ocean, plastic particles accumulate on their surface the pollutants present in rivers (pesticides, hydrocarbons, heavy metals, etc.) and can have toxic effects on the organisms which ingest them, slowing their growth and reproduction by disrupting their metabolism and their hormonal system.

In the next 12 to 18 months, these samples will make it possible to compare the quantities of waste, their degradation, composition, etc. These microplastics are so many clues, providing “ evidence ” to trace the origin of the dispersion, identify the dispersion centers according to their size and chemical nature, and target the highest concentrations of microplastics, so that we can take action at the source as soon as possible.

The Genoscope-CEA will perform DNA sequencing on the diverse organisms associated with plastic particles, making it possible to explore the “plastisphere” (ie, microorganisms that colonize plastics) and identify pathogenic bacteria and/or microorganisms capable of playing a role in the fragmentation and biodegradation of plastics. This basic research is necessary to help find solutions, especially in biotechnologies.

According to Romain Troublé (executive director of the Tara Ocean Foundation), “This vast proportion of microplastics—already impossible to collect at sea, and transported also by our watersheds and rivers—makes it impossible to clean the rivers. Solutions to this problem are definitely on land.” The Tara Ocean Foundation’s mission includes translating scientific expertise in order to inform public policies. Here are 5 urgent and complementary measures that should be taken immediately:

—Significantly improve the collection and recycling of waste, for example, via deposits on bottles and soda cans—Drastically reduce disposable plastics, single-use and other packaging
—Reduce the number of resins and the complexity of additives used in manufacturing plastic objects
—Develop « eco-packaging » to replace problematic materials such as expanded polystyrene
—Adopt laws setting a «source reduction calendar» for all types of disposable packaging, consistent with European directives.