The formation of deep water, which is an important and sensitive component of the climate system, takes place in only a few parts of the ocean. Apart from the best-known region in the subpolar North Atlantic, this also happens in a few places in the Southern Hemisphere, especially in the Weddell Sea in Antarctica. There, the so-called Antarctic Bottom Water (AABW) is formed. While today AABW is circulating northwards into the other ocean basins, results of a new study, led by the GEOMAR Helmholtz Centre for Ocean Research Kiel in cooperation with the Alfred Wegener Institute, Helmholtz Centre for Polar and Marine Research, Bremerhaven, show that this was different under extreme climatic conditions in the past.

Ocean currents are essential for the global distribution of heat and thus also for climate on earth. For example, oxygen is transferred into the deep sea through the formation of new deep water around Antarctica. Weddell Sea sourced Antarctic Bottom Water (AABW) normally spreads northwards into the South Atlantic and Indian Oceans. However, during the peak of the last two ice ages, the supply of deep water from the Weddell Sea to the South Atlantic Ocean was apparently interrupted, as shown by a new study led by scientists of the GEOMAR Helmholtz Centre for Ocean Research Kiel.

"Up to now, it has been widely assumed that Antarctic Bottom Water was also formed during the ice ages and exported to large parts of the Southern Ocean", explains Dr. Marcus Gutjahr, co-author of the study from GEOMAR. "It may still be possible that deep water formation indeed took place, but unlike today, it was not circulating into the South Atlantic Ocean further north", Gutjahr continues. Most likely, generally weaker circulation within the Southern Ocean during cold periods was responsible for this interruption of AABW export.

Some of the results of the study were surprising in that similar disturbances of AABW export were also seen during the climatic optimum of the last interglacial (warm period) about 128,000 years ago

The authors of the study, which has now been published in the scientific journal Nature Communications, have analyzed various sediment cores from this region. The scientists were able to determine the origin of Southern Ocean deep water over the last two major glaciation phases of the last 140,000 years via the chemical extraction of seawater-derived neodymium and lead isotope signatures from sediments. "While neodymium isotopes dissolved from the sediments provide information about the origin of the bottom water, lead isotope signatures provide information about the average composition of the entire water column", explains the first author of the study, Dr. Huang Huang from GEOMAR.

Some of the results of the study were surprising in that similar disturbances of AABW export were also seen during the climatic optimum of the last interglacial (warm period) about 128,000 years ago. These could have been caused by strong melting, especially in the area of the West Antarctic Ice Sheet, an effect that will most likely occur in a warmer climate in the future. "As a result of such a disturbance in the overturning circulation, the total heat budget of the Southern Ocean and its ability to absorb heat from the atmosphere may be significantly altered in the long term," says Dr. Gutjahr.

The properties of AABW formed today have already significantly changed over the past decades. It is now warmer, less saline and less voluminous, in turn indicating lower rates of formation. As a bottom line, the new results suggest that the required conditions for the export of AABW from the Weddell Sea are not present both in extreme cold or warm phases. The generation of these very clear insights into the circulation state of the Southern Ocean during etreme past climates would not have been achievable without the possibility of using a set of unique sediments from the Alfred Wegener Institute (AWI) in Bremerhaven and the active collaboration with co-author Dr. Gerhard Kuhn there.

In a next step, Dr. Gutjahr wants to investigate the export of AABW from the Weddell Sea closer to Antarctica in the outflow area into the Scotia Sea area over climatically unstable periods of the last million years. For this purpose, new samples are available, which were obtained during an international expedition within the International Ocean Discovery Program (IODP expedition 382) in early 2019. In the medium term, samples from other regions of the Southern Ocean are to be added in order to investigate the dispersal paths into other ocean basins in more detail. It is a rather lengthy detective game with which the researchers want to learn more about control mechanisms of the climate of the Southern Hemisphere. "Ultimately, our goal is to be able to predict under which climatic conditions which parts of the Antarctic ice sheet will substantially melt, and what direct effects this will have on the circulation of the Southern Ocean," Gutjahr concluded. 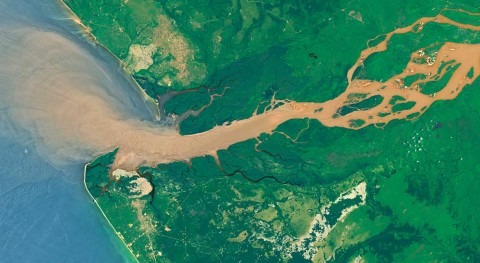