Floods Minister Rebecca Pow has visited Hebden Bridge and a natural flood management scheme near Skipton as she brought together a roundtable of MPs, local authorities, flood experts and water companies to examine the issue of flooding along the River Aire and River Calder.

Held in Hebden Bridge Town Hall, the roundtable was an opportunity for the minister to hear from local representatives, including MPs and council leaders in communities that have suffered the devastating impact of flooding, and to look at how the Government, Environment Agency and communities can work together to improve the resilience of the area in the future.

The Aire and Calder river catchment has been one of the worst affected by frequent flooding in recent years, with major flooding hitting the areas in 2012, 2015 and 2020.

Between 2015 and 2021, the Government invested £530 million in flood and coastal schemes across Yorkshire and the Humber. The region has received more investment than any other region, including £113.2 million in the Aire and Calder catchments.

It was recently announced that the region will benefit from more than £146 million investment in over 150 schemes in 2021/22 – an extra £40 million compared to last year – as part of the Government’s plans to invest a record £5.2 billion in new flood and coastal defences across England over the next six years.

"I would like to thank all those who attended today’s meeting for their positive and productive contributions as we work together to better protect communities along the River Aire and River Calder from the devastating flooding they have suffered in the past."

"We are making progress – a new flood alleviation scheme at Mytholmroyd will better protect 400 homes and businesses, while we’re harnessing the power of nature in the upper catchments to slow the flow of water and reduce risk downstream."

"However, I know that there is more to do and we’re continuing to invest in places like Leeds and Hebden Bridge. We will boost the resilience of communities across Yorkshire as we face more extreme weather brought about by climate change."

"The Environment Agency is working with partners to reduce the risk of flooding across Yorkshire, and more than 66,000 properties have been better protected since 2015, including along the River Aire and River Calder which have suffered terribly in recent years."

"As well as building more traditional flood defences downstream, such as walls and embankments, it has meant working with landowners, such as those at Broughton Hall on the upper Aire and Hardcastle Crags upstream from Hebden Bridge to plant trees and create leaky dams to slow the run-off of heavy rain from the hills."

"Across the region, 150 flood schemes are underway and we are committed to working with communities, councils, MPs and government to make communities along the Aire and Calder more resilient for the future."

Ahead of the roundtable, the Minister visited the Broughton Hall estate near Skipton, which is one of a number of sites across the Upper Aire catchment where natural flood management techniques are being implemented to reduce flood risk in downstream communities.

The landowner recently started the largest tree planting scheme in England, with the White Rose Forest planting 160 hectares of trees – the equivalent of 224 football pitches – between December 2020 and March 2021. Alongside tree planting and rewilding, further work includes soil aeration, the creation of leaky dams, gully blocking and culvert daylighting.

These works will not only help to hold water upstream and slow its flow into the River Aire to reduce flood risk downstream in Leeds and other communities, but will also contribute towards carbon capture and increased animal and woodland biodiversity.

The work is a partnership between the landowner, Leeds City Council, the Environment Agency, the White Rose Forest, Jeremy Benn Associates and Yorkshire Integrated Catchment Solutions (iCASP). It is part of the wider Leeds Flood Alleviation Scheme programme, and is being delivered by the Environment Agency on behalf of Leeds City Council. Work has been delivered on a variety of sites across the catchment, in collaboration with numerous stakeholders, to reduce flooding in Leeds City Centre. 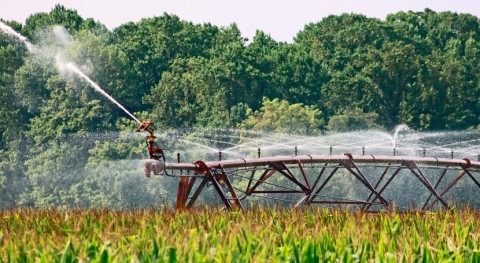