Climate change
A launch event at the Bowmanston water pumping station has marked the start of the Water Sector Resilience Nexus for Sustainability in Barbados (WSRN S-Barbados) project, the first GCF-funded project in the Caribbean to move to implementation.

The project will build the resilience of Barbados to the impacts of climate change, as well as supporting adaptation measures in the water sector, and reducing the carbon footprint of the Barbados Water Authority (BWA). The project is being undertaken by the Caribbean Community Climate Change Centre (CCCCC), a direct access Accredited Entity that carries out GCF projects in the region.

Speaking at the project launch, Wilfred Abrahams, Minister of Energy and Water Resources, stated, "This is a big deal - a very big deal for us. We are the proud recipients of a mix of funding from GCF totalling USD 27 million. The project will provide a replicable framework for countries of the Eastern Caribbean, all of which experience similar issues."

On behalf of GCF, ecosystems management expert Patrick Van Laake said, "GCF is keenly aware of the challenges which the Caribbean faces, not the least of which is the hurricane season, and how these are exacerbated by climate change. GCF is particularly pleased to have CCCCC, as a regional direct access entity, demonstrating leadership and I wish to congratulate them for their tremendous work, as well as recognising the support of the National Designated Authority and the efforts of the Barbados Water Authority."

WSRN S-Barbados is the first GCF project that has moved to implementation in the Caribbean region. There are seven GCF projects in the region, addressing climate resilience and the transition to low emissions development, with a total commitment of USD 456.7 million from GCF. In addition to multi-country regional programmes, Barbados is one of three Caribbean Countries with single-country projects approved, the others being Grenada and Belize.

GCF is providing USD 26.6 million in grant funding for the project, which will mobilise an additional USD 17.6 million in co-financing. WSRN S-Barbados has four activity strands, aimed at addressing the nexus between adaptation, resilience, and mitigation measures in relation to the island’s water sector.

The first activity component targets improving resilience to storm events and reducing the carbon footprint of BWA. This is being realised through investment in PV solar power facilities for three water pumping stations, as well as micro-gas turbines for back-up use. This will reduce the energy use of BES from the grid, which is currently the country’s largest energy client.

Some of the savings from reduced energy costs will be used to create a Revolving Adaptation Financing Facility, that will finance credit facilities for households, businesses, hoteliers and public entities to support adaptation measures. The third component will support Water Loss Reduction initiatives, reducing disruptions in water supply and building resilience to climate change impacts upon water supply, whilst the final component will build capacity and raise public awareness of related issues through a training programme. 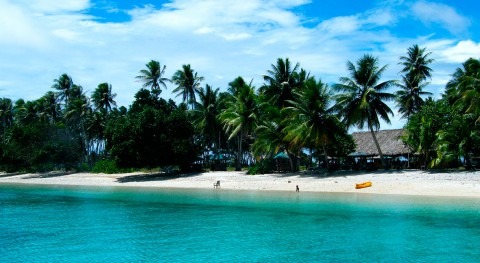