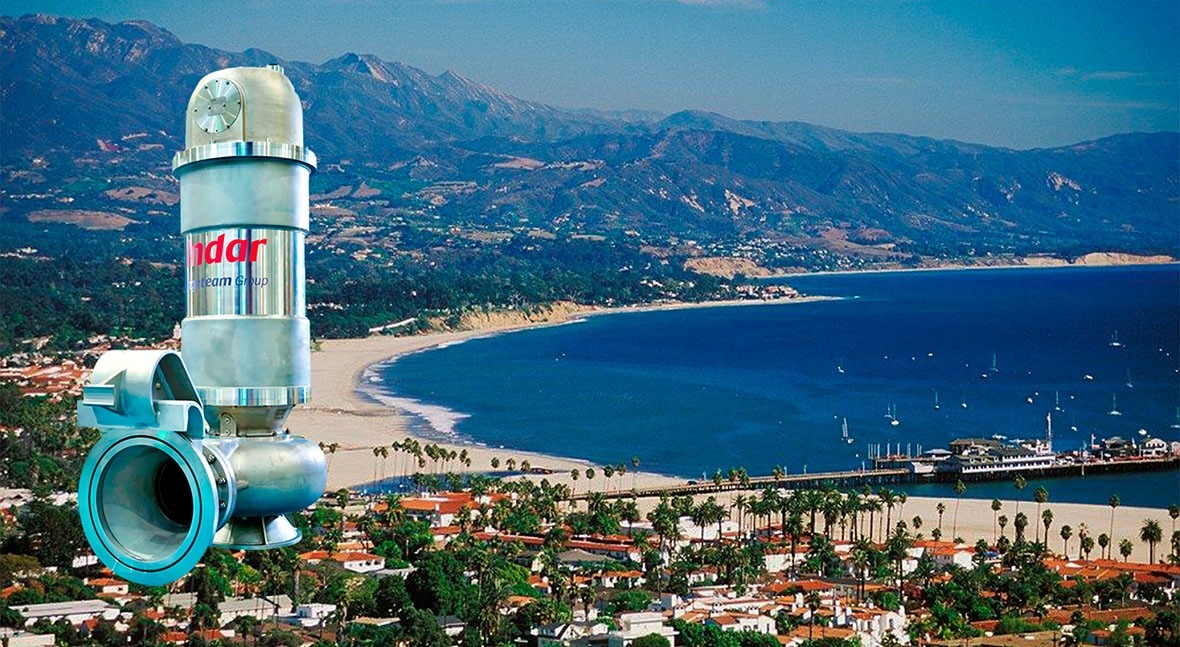 The plant began supplying water in May 2017 with a production of nearly three million gallons per day. This is equivalent to 3,125 acre-feet of water (4.63 million of m3) annually or about 30 percent of the city’s demand; that means about 100,000 inhabitants (including the Montecito community with whom Santa Bárbara has a supply agreement). The desalination plant is an important part of the city’s water supply portfolio, which also includes surface water from Cachuma and Gibraltar reservoirs, groundwater, State water, purchased water, recycled water, and conservation. 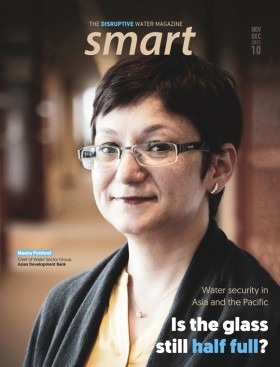 Water security in Asia and the Pacific – Is the glass still half full?

The capital costs to reactivate the plant are $72 million financed over 20 years with a low 1.6 percent interest rate loan, which equates to $4.2 million per year in debt service. Annual operating costs are estimated to be about $4.1 million at full production and about $1.5 million in non-operation or standby mode. The plant could be put in standby mode during rainy periods to reduce operating costs.

Seawater enters the city’s desalination plant from 2,500 feet (763 m) offshore passing through the wedge wire screens at velocities of less than 0.5 feet per second (1.524 m/s) which is less than typical ocean currents (open ocean intake). 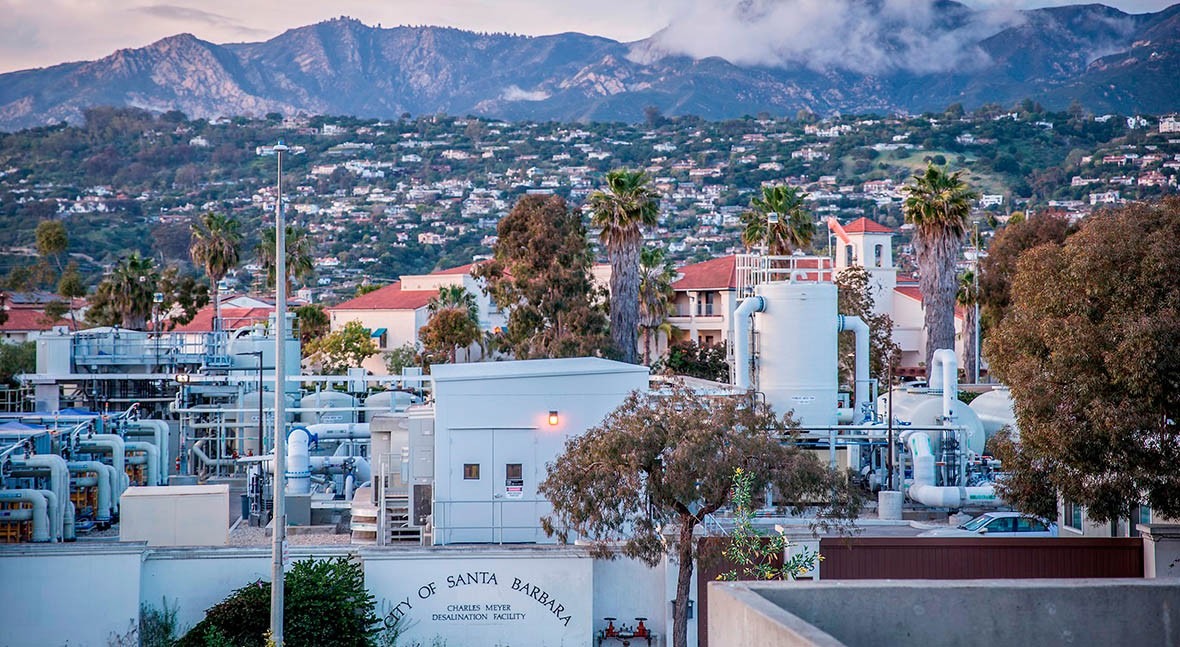 Once on shore, the seawater passes through a series of filters that remove sediment, bacteria, viruses, and minerals (including salt), to produce ultra-pure water. The city’s desalination plant uses reverse osmosis to remove salt from seawater.

Desalination is an important part of the city’s supply, also including surface water, groundwater, recycled water, and other sources

Before the finished water is ready to be pumped into the water system and distributed to customers, natural minerals are reintroduced into the water to make it compatible with the city’s other water supplies.

The waste product from the desalination process is referred to as brine and is about twice as salty as normal seawater. The brine is blended with the city’s treated wastewater and is discharged into the ocean over a mile and a half offshore. Discharge flow rates of brine and treated wastewater leaving the city’s outfall pipe are controlled to protect sea life and comply with current regulations. 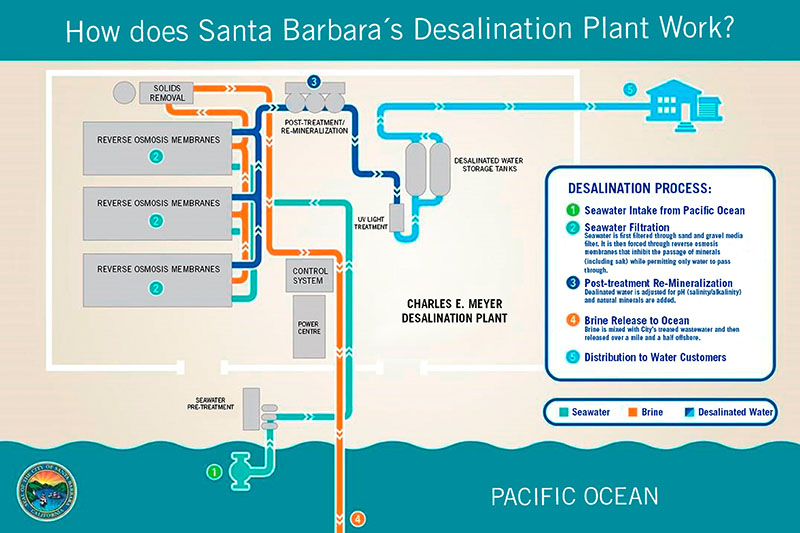 By 2020, IDE technologies, according to the actual operating points over the last three years, updated the technical requirements for the intake pumps. A more adjusted hydraulic selection, tailored for the project’s needs, was chosen for the retrofit of one of the two intake pumps, as the pump was not operating at its best with the current desalination intake needs in terms of flows, heads and material selection.

The customized submersible pump with mixed flow, single stage and single inlet has an enclosed multi-channel impeller with a big free ball passage. Being projected with a volute diffuser the equipment has been adapted to fit the original layout (intake and discharge) of the intake sump.

The material selection with duplex stainless steel increases corrosion resistance for the equipment taking into account the marine environment for the installation; this fact is crucial to guarantee the optimal operation of the equipment and minimize maintenance stops. 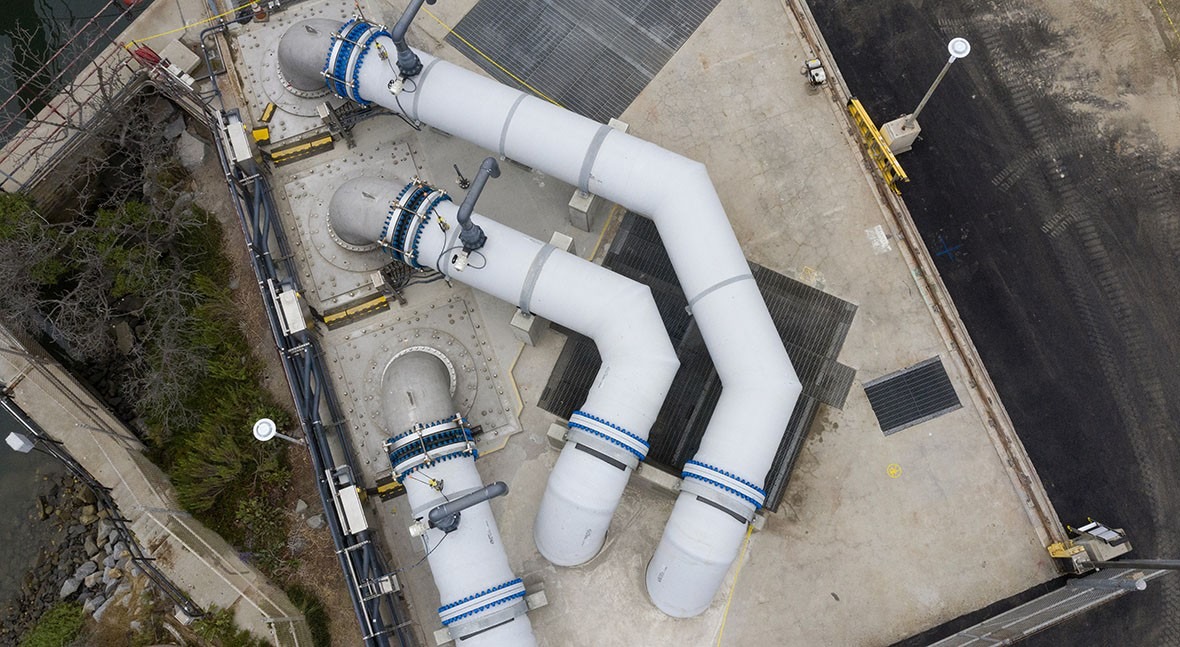 Indar’s submersible pump sets for desalination water intake projects, open ocean and subsurface (slant or not), are a technically and environmentally friendly alternative due to the efficient use of water. Backed by our proven in-house technology, we offer stiff, high performance and almost maintenance free solutions.

Products are important and so are our services and our commitment to customers’ needs and projects. Our worldwide available customer support services teams raise the service to the highest level; they deliver fast, reliable and comprehensive innovative solutions during the total life cycle of the equipment.

Our customer support services teams deliver fast, reliable and comprehensive innovative solutions during the life cycle of the equipment

With this new project in Santa Barbara and the contract with POSEIDON WATER LLC, Indar (Ingeteam Group) offers its know-how and expertise in integrated water management to raise our environmental value proposition for our customers.