Companies25
Ingeteam
Ingeteam offers the best engineering and manufacturing technology in pumping solutions for the complete water cycle. Reliability and efficiency in the management of water resource throughout the life cycle of its products.
TwitterLinkedInWeb

Mexico City, located in The Valley of Mexico is particularly vulnerable to flooding. Without any natural drainage outlet for stormwater that flows from the surroundinging mountainsides, the capital city of Mexico faces difficult technical and social challenges in carrying out an effective flood management strategy. Preventive flood risk management requires dependable and reliable pumping solutions.

Much of the city rests on what was Lake Texcoco. The lake was drained starting in the 17th century. City drainage was engineered through the use of canals and tunnels. Although none of the lake water remains, the city rests on the lake bed’s heavily saturated clay. The soft base is collapsing due to the overextraction of groundwater, resulting in significant groundwater-related subsidence.

Consequently, the city has sunk as much as nine meters in some areas since the early 20th century. This sinking is causing problems with runoff and wastewater management, leading to flooding problems especially during the rainy season, which can last from May through October. The area receives about 820 millimeters of annual rainfall during this period with little or no precipitation the remainder of the year.

Tropical storms unleash intense rainfall that flows through the city’s waterways and drains, which are often clogged with solid waste and prevent water from freely flowing to outlets and pumping stations.

Over the past few decades, the city has grown rapidly and the areas surrounding waterways are often densely populated with informal dwellings encroaching over the water, obstructing flow and preventing maintenance and desilting. Many of the existing pumping stations are old and lack sufficient capacity for even normal rainfall conditions. 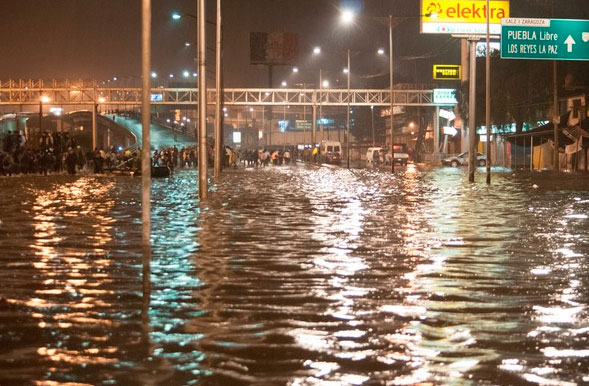 In 2017, the Mexican city government invested US$29 million in the Vicente Guerrero Project – a collector, lagoon, and pumping plant – in order to prevent flooding in Iztapalapa, the city’s largest of 16 boroughs with a population of 1.83 million (2019). More than 90 percent of its territory is urbanized. The borough transitioned from a rural area with some farms and canals as late as the 1970s, to an area with the only green areas in parks and almost all of its people employed in commerce, services, and industry. This is the result of a large influx of people into the borough starting from the 1970s and which still continues. The area has a high level of socioeconomic marginalization, with a significant number of people lacking sufficient access to clean potable water.

The new pumping plant, which draws water from the collectors and sends it to the lagoon, provides an engineering lesson from its design to its construction, due to the installation of reliable pumping solutions that keep the plant operating during highintensity rain events.

One of the main stormwater pumping challenges is the management of suspended solids and other materials carried in stormwater runoff during rain events. Runoff is created when rain falls on roads, driveways, parking lots, rooftops, and other paved surfaces, which prevent infiltration and the runoff flows over the ground surface. Runoff picks up and carries many different pollutants and solids on paved surfaces such as sediment or trash.

Pumping stations use filters and screens to prevent solids from entering the intake sump, however, stormwater runoff can drive different solids to the pump and cause damage to pumping equipment.

The Vicente Guerrero Pumping Plant was designed to prevent this type of damage by using six Indar submersible axial flow pumps that pump a total flow of 6,000 liters per second. The submersible solution enabled SACMEX to reduce the station size, eliminate any concern about motor damage in case of flooding, and reduce the noise level, which is very importantgiven the pump station is located in a densely populated area. 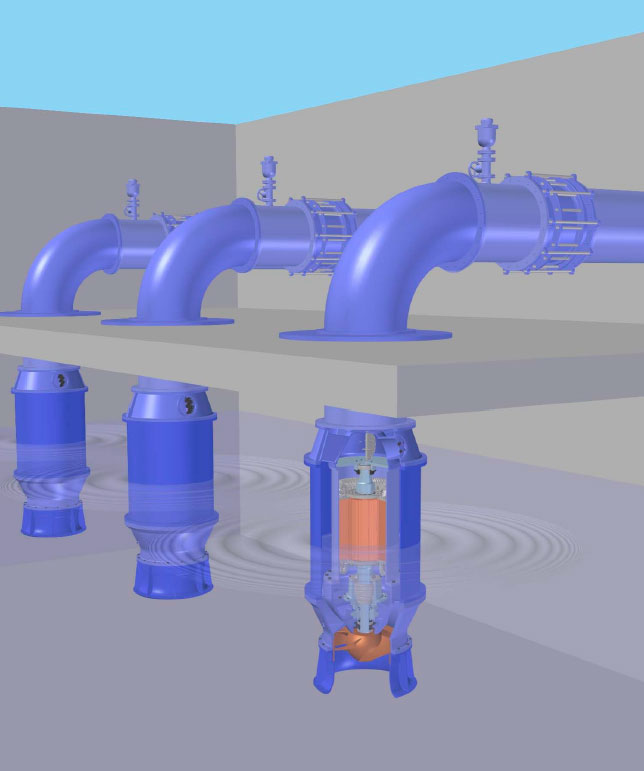 Flood prevention depends on the optimal design of the pumping station, but also on pumping equipment characteristics. Axial flow pumps are traditionally installed inside cans with cables in the middle of the flowing current, which makes cables the most critical point of the pumping application. As a typical standard, the equipment is designed with cable protection elements. In theory, these devices should be sufficient given this added reinforcement to protect the cables. Reality and experience, however, have taught us that solids in transfer with the fluid, with their impact, break the protection by damaging the cables. The H-type pump is designed with a shroud to prevent this damage.

The pumps with the axial flow, single-stage and single inlet have opened multi-channel impellers, which allow large free solids going through the pump with no clogging. These heavy-duty units are specially designed for pumping urban and industrial wastewater and raw water. 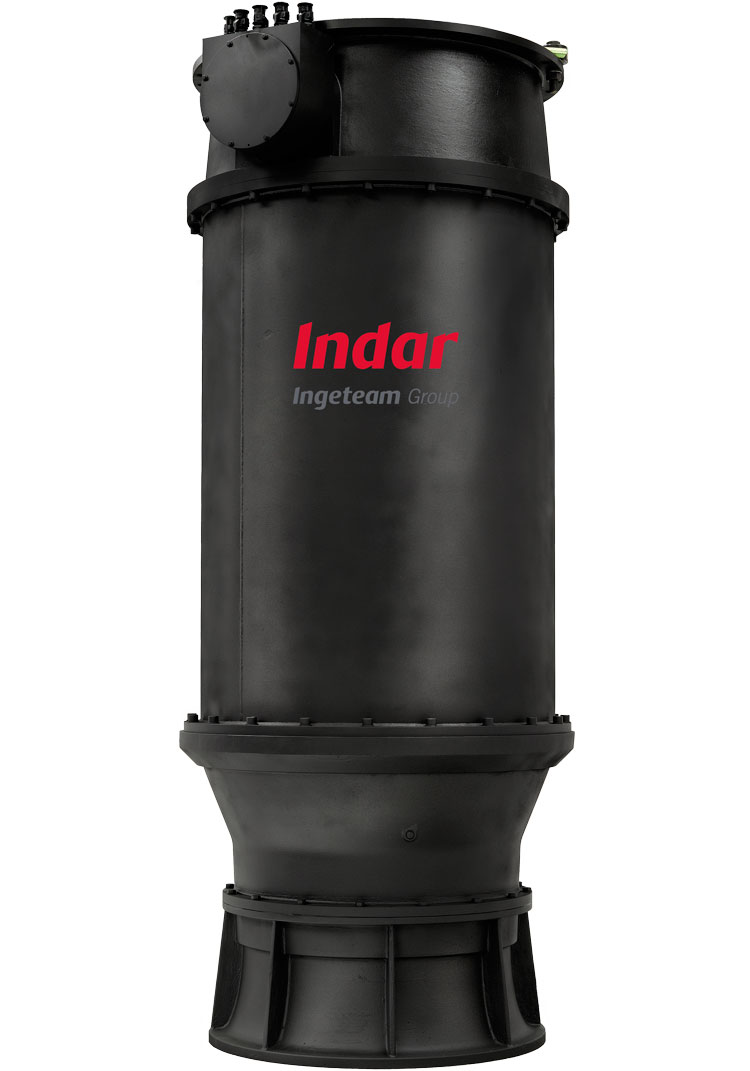 The electro-pump sets for installation with shroud H-style are equipped with a cooling shroud, which allows the circulation of the pumped water inside of it. The cables once outside the unit are protected, preventing these from coming into contact with the pumped water, eliminating any risk of being damaged when pumping fluid with solids, such as stones, wood, and other debris carried by runoff.

Successful implementation and management of stormwater program demands reliance on durable pumping systems that keep running without any problems during a flood event. The design change from installing the traditional HE type to Indar H type, which protects cables from contact with the pumped flow, in the configuration of the submersible axial flow pump provides a reliable solution that makes the Vicente Guerrero Pumping Station one of the most reliable pumping stations in Mexico City. 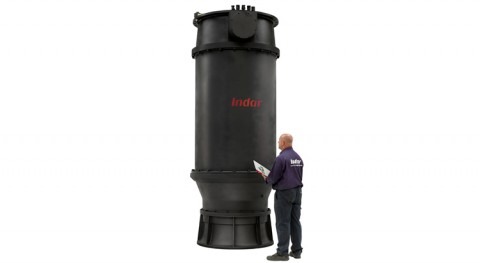 "Ingeteam is the right partner for the design of pumping solutions" 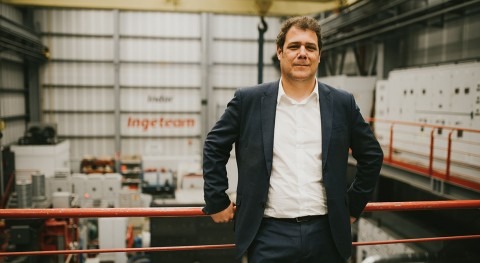 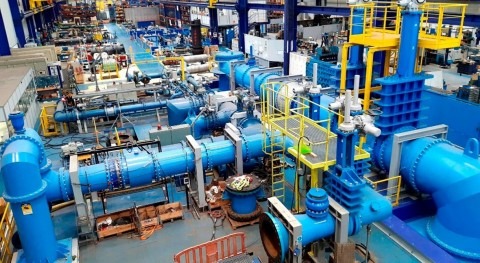 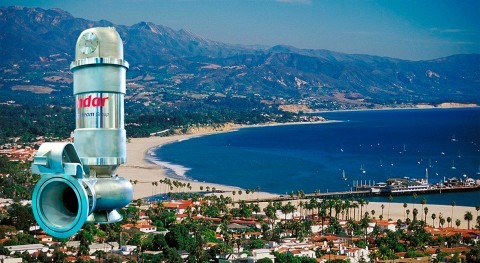 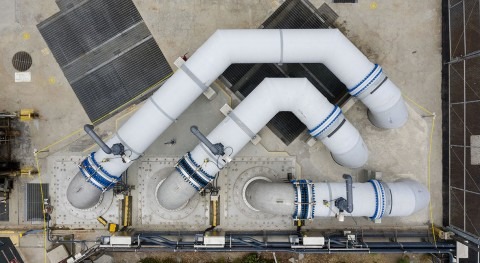