Intense droughts lasting a year or two are common in Chile and other countries with Mediterranean climates. But the drought currently gripping central Chile—which has dragged on for more than a decade—is something quite different.

Since 2010, precipitation in central Chile has been below normal each year by an average of 20 to 45 percent. Around Santiago, home to more than 7 million people, the lack of rain has been particularly extreme, with just 10 to 20 percent of normal rain falling during the past few years.

No drought in Chile’s modern meteorological record (since 1915) has lasted longer, Paleoclimatologists who look for clues of past climate conditions in tree rings estimate that the last “megadrought” of this scale probably occurred in this region more than 1000 years ago, explained René D. Garreaud, a scientist at the University of Chile.

The dwindling rains have had far-reaching consequences, particularly for farmers. In August 2019, Chile’s Ministry of Agriculture declared agricultural emergencies for more than 50 municipalities. Tens of thousands of farm animals have died, and tens of thousands more are at risk. Water supply systems are strained, and reservoirs are low. Many people in rural areas are getting their drinking water from tanker truck deliveries. 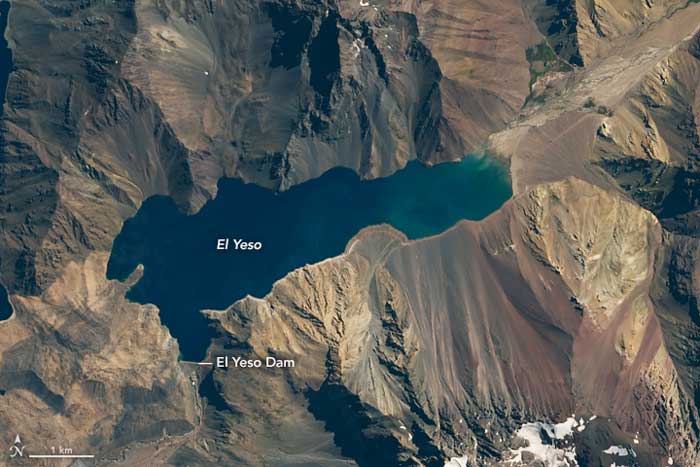 El Yeso, one of the main reservoirs that supplies Santiago on on March 19, 2016,

This pair of natural-color images shows El Yeso, one of the main reservoirs that supplies Santiago. The image on the left shows the reservoir on March 19, 2016, when it held about 219 million cubic meters of water. By March 2020, the volume had dropped to 99 million cubic meters, about 40 percent of capacity. Both images were acquired by the Operational Land Imager (OLI) on Landsat 8.

Most of the water that reaches the reservoir falls as snow on nearby mountains. During the spring and summer, the snow and ice melts, replenishing streams that flow into the reservoir. But a lack of snow for the past few years means some key peaks to the south and east that would normally be snow-covered are now bare.

Scientists who have studied the megadrought attribute about 25 percent of its intensity and severity to global warming. They attribute the rest to natural cycles in atmospheric circulation, ocean temperatures, and rainfall patterns, such as those associated with the Pacific Decadal Oscillation.