From above, the Antarctic Ice Sheet might look like a calm, perpetual ice blanket that has covered Antarctica for millions of years. But the ice sheet can be thousands of meters deep at its thickest, and it hides hundreds of meltwater lakes where its base meets the continent’s bedrock. Deep below the surface, some of these lakes fill and drain continuously through a system of waterways that eventually drain into the ocean.

Now, with the most advanced Earth-observing laser instrument NASA has ever flown in space, scientists have improved their maps of these hidden lake systems under the West Antarctic ice sheet—and discovered two more of these active subglacial lakes.

The new study provides critical insight for spotting new subglacial lakes from space, as well as for assessing how this hidden plumbing system influences the speed at which ice slips into the Southern Ocean, adding freshwater that may alter its circulation and ecosystems.

NASA’s Ice, Cloud and land Elevation Satellite 2, or ICESat-2, allowed scientists to precisely map the subglacial lakes. The satellite measures the height of the ice surface, which, despite its enormous thickness, rises or falls as lakes fill or empty under the ice sheet.

Hydrology systems under the Antarctic ice sheet have been a mystery for decades. That began to change in 2007, when Helen Amanda Fricker, a glaciologist at Scripps Institution of Oceanography at the University of California San Diego, made a breakthrough that helped update classical understanding of subglacial lakes in Antarctica.

Using data from the original ICESat in 2007, Fricker found for the first time that under Antarctica’s fast flowing ice streams, an entire network of lakes connect with one another, filling and draining actively over time. Before, these lakes were thought to hold meltwater statically, without filling and draining.

“The discovery of these interconnected systems of lakes at the ice-bed interface that are moving water around, with all these impacts on glaciology, microbiology, and oceanography—that was a big discovery from the ICESat mission,” said Matthew Siegfried, assistant professor of geophysics at Colorado School of Mines, Golden, Colo. and lead investigator in the new study. “ICESat-2 is like putting on your glasses after using ICESat, the data are such high precision that we can really start to map out the lake boundaries on the surface.”

Scientists have hypothesized subglacial water exchange in Antarctica results from a combination of factors, including fluctuations in the pressure exerted by the massive weight of the ice above, the friction between the bed of the ice sheet and the rocks beneath, and heat coming up from the Earth below that is insulated by the thickness of the ice. That’s a stark contrast from the Greenland ice sheet, where lakes at the bed of the ice fill with meltwater that has drained through cracks and holes on the surface.

To study the regions where subglacial lakes fill and drain more frequently with satellite data, Siegfried worked with Fricker, who played a key role in designing the way the ICESat-2 mission observes polar ice from space.

Siegfried and Fricker’s new research shows that a group of lakes including the Conway and Mercer lakes under the Mercer and Whillans ice streams in West Antarctica are experiencing a draining period for the third time since the original ICESat mission began measuring elevation changes on the ice sheet’s surface in 2003. The two newly found lakes also sit in this region.

In addition to providing vital data, the study also revealed that the outlines or boundaries of the lakes can change gradually as water enters and leaves the reservoirs.

“We're really mapping out any height anomalies that exist at this point,” Siegfried said. “If there are lakes filling and draining, we will detect them with ICESat-2.”

'Helping Us Observe' Under the Ice Sheet

Precise measurements of basal meltwater are crucial if scientists want to gain a better understanding of Antarctica’s subglacial plumbing system, and how all that freshwater might alter the speed of the ice sheet above or the circulation of the ocean into which it ultimately flows.

An enormous dome-shaped layer of ice covering most of the continent, the Antarctic ice sheet flows slowly outwards from the central region of the continent like super thick honey. But as the ice approaches the coast, its speed changes drastically, turning into river-like ice streams that funnel ice rapidly toward the ocean with speeds up to several meters per day. How fast or slow the ice moves depends partly on the way meltwater lubricates the ice sheet as it slides on the underlying bedrock.

As the ice sheet moves, it suffers cracks, crevasses, and other imperfections. When lakes under the ice gain or lose water, they also deform the frozen surface above. Big or small, ICESat-2 maps these elevation changes with a precision down to just a few inches using a laser altimeter system that can measure Earth’s surface with unprecedented detail.

ICESat-2 will provide scientists with height measurements that create a global portrait of Earth’s third dimension, gathering data that can precisely track changes of terrain including glaciers, sea ice, forests and more. The single instrument on ICESat-2 is ATLAS, the Advanced Topographic Laser Altimeter System, will measure melting ice sheets and investigate how this effects sea level rise, investigate changes in the mass of ice sheets and glaciers, estimate and study sea ice thickness, and measure the height of vegetation in forests and other ecosystems worldwide. Credits: NASA/Ryan Fitzgibbons

Tracking those complex processes with long-term satellite missions will provide crucial insights into the fate of the ice sheet. An important part of what glaciologists have discovered about ice sheets in the last 20 years comes from observations of how polar ice is changing in response to warming in the atmosphere and ocean, but hidden processes such as the way lake systems transport water under the ice will also be key in future studies of the Antarctic Ice Sheet, Fricker said.

“These are processes that are going on under Antarctica that we wouldn't have a clue about if we didn't have satellite data,” Fricker said, emphasizing how her 2007 discovery enabled glaciologists to confirm Antarctica’s hidden plumbing system transports water much more rapidly than previously thought. “We've been struggling with getting good predictions about the future of Antarctica, and instruments like ICESat-2 are helping us observe at the process scale.”

'A Water System That Is Connected to the Whole Earth System'

How freshwater from the ice sheet might impact the circulation of the Southern Ocean and its marine ecosystems is one of Antarctica’s best kept secrets. Because the continent’s subglacial hydrology plays a key role in moving that water, Siegfried also emphasized the ice sheet’s connection to the rest of the planet.

“It's not just the ice sheet we're talking about,” Siegfried said. “We're really talking about a water system that is connected to the whole Earth system.”

Recently, Fricker and another team of scientists explored this connection between freshwater and the Southern Ocean—but this time by looking at lakes near the surface of an ice shelf, a large slab of ice that floats on the ocean as an extension of the ice sheet. Their study reported that a large, ice-covered lake collapsed abruptly in 2019 after a crack or fracture opened from the lake floor to the base of Amery Ice Shelf in East Antarctica.

With data from ICESat-2, the team analyzed the rugged change on the landscape of the ice shelf. The event left a doline, or sinkhole, a dramatic depression of about four square miles (about 10 square kilometers), or more than three times the size of New York City's Central Park. The crack funneled nearly 200 billion gallons of freshwater from the surface of the ice shelf into the ocean below within three days.

During the summer, thousands of turquoise meltwater lakes adorn the bright white surface of Antarctica’s ice shelves. But this abrupt event occurred in the middle of the winter, when scientists expect water on the surface of the ice shelf to be completely frozen. Because ICESat-2 orbits Earth with exactly repeating ground tracks, its laser beams can show the dramatic change in the terrain before and after the lake drained, even during the darkness of polar winter. 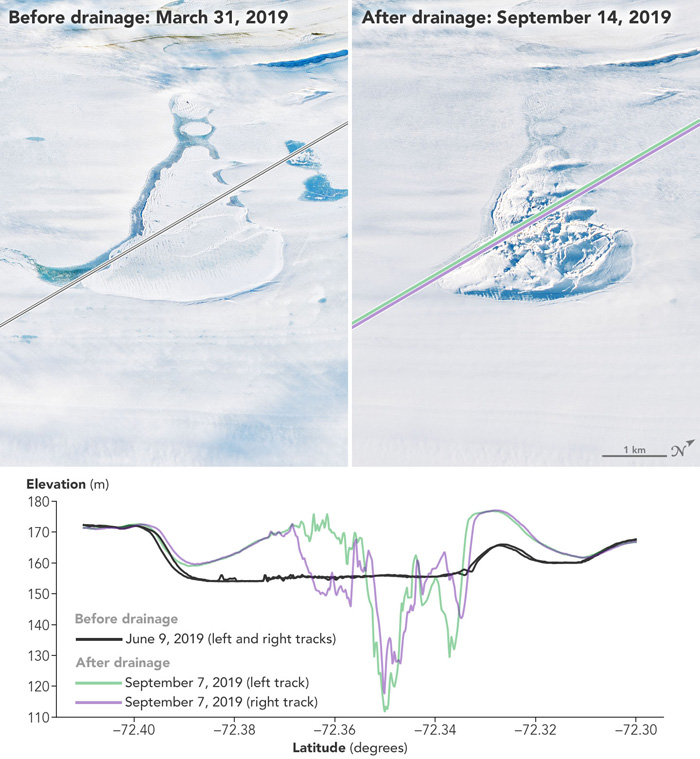 The height profile above was acquired by NASA’s Ice, Cloud, and land Elevation Satellite 2 (ICESat-2) using the Advanced Topographic Laser Altimeter System (ATLAS). The image shows the elevation data acquired by three different ATLAS laser beams as the satellite passed over an ice-covered lake that collapsed suddenly and abruptly on the surface of Antarctica’s Amery Ice Shelf in 2019. ​Credits: NASA's Earth Observatory

Roland Warner, a glaciologist with the Australian Antarctic Program Partnership at the University of Tasmania, and lead author of the study, first spotted the scarred ice shelf in images from Landsat 8, a joint mission of NASA and the U.S. Geological Survey. The drainage event was most likely caused by a hydrofracturing process in which the mass of the lake’s water led to a surface crack being driven right through the ice shelf to the ocean below, Warner said.

“Because of the loss of this weight of water on the surface of the floating ice shelf, the whole thing bends upwards centered on the lake,” Warner said. “That's something that would have been difficult to figure out just staring at satellite imagery.”

Meltwater lakes and streams on Antarctica’s ice shelves are common during the warmer months. And because scientists expect these meltwater lakes to be more common as air temperatures warm, the risk of hydrofracturing could also increase in coming decades. Still, the team concluded it’s too early to determine whether warming in Antarctica’s climate caused the demise of the observed lake on Amery Ice Shelf.

Witnessing the formation of a doline with altimetry data was a rare opportunity, but it is also the type of event glaciologists need to analyze in order to study all of the ice dynamics that are relevant in models of Antarctica.

“We have learned so much about ice sheet dynamic processes from satellite altimetry, it is vital that we plan for the next generation of altimeter satellites to continue this record,” Fricker said.