Large parts of South America are in the grip of a serious drought. Signs of the drought began to appear in satellite gravimetry observations of southeastern Brazil in mid-2018 and had spread into parts of Paraguay, Bolivia, and northern Argentina by 2020.

“This is the second most intense drought in South America since 2002,” said Matthew Rodell, a hydrologist based at NASA’s Goddard Space Flight Center. “The calculation is based on the extent, duration, and volume of water lost during the drought as measured by the GRACE and GRACE-FO satellites.” A drought in eastern Brazil and Venezuela in 2015-16 is the only more intense drought on the record.

The map above shows shallow groundwater storage in South America on October 26, 2020, as measured by the Gravity Recovery and Climate Experiment Follow On (GRACE-FO) satellites. The colors depict the wetness percentile; that is, how the levels of groundwater compare to long-term records for October. Blue areas have more abundant water than usual, and orange and red areas have less. The darkest reds represent dry conditions that should occur only 2 percent of the time (about once every 50 years).

The long period of dry weather in central and southern South America has had widespread consequences. Many of the affected areas have faced unusually intense and widespread outbreaks of fire. Winter corn crops have suffered low yields, and the late arrival of spring rain has delayed new plantings of soy. On key rivers, the lack of water has hampered shipping. Several ships have run aground, and many vessels have had to reduce their cargo in order to navigate to and from inland river ports. 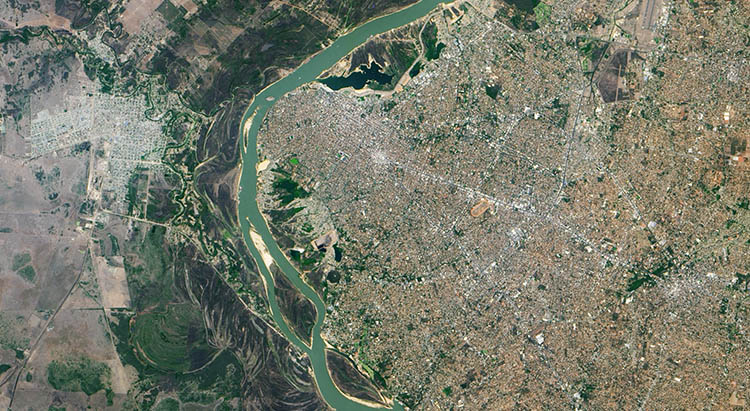 The image reveals low water on the Paraguay River near Asunción, the capital and principal port of Paraguay. According to an Associated Press report, the river has fallen to its lowest level in half a century. With cargo delayed and ships carrying smaller-than-normal loads, millions of dollars in commerce have already been lost. If water levels continue to drop, shipping into the port could halt, industry experts say.

Both the image above were acquired by the Operational Land Imager (OLI) on Landsat 8. The first image shows a stretch of the river on October 7, 2020, when water was at historically low levels. The second image shows the same area on October 15, 2017, when water levels were much higher. The low water has exposed several sandbars and islands that are typically submerged. 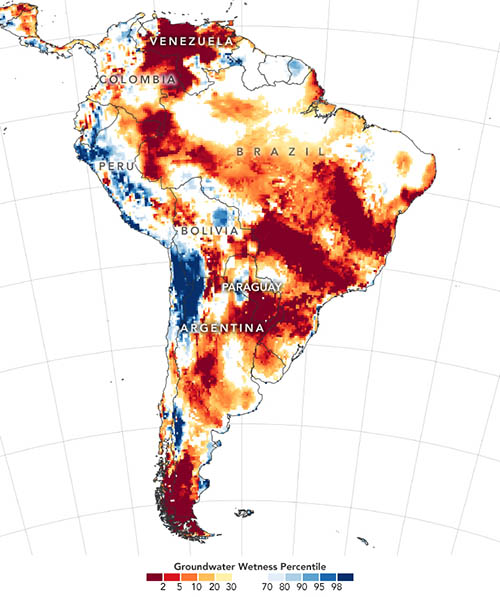 Since oceans play a large role in storing and distributing heat and moisture around the world, prolonged dry or wet spell are often preceded and accompanied by noticeable anomalies in sea surface temperatures. Before the fire season, Yang Chen of the University of California Irvine, forecasted dry, fire-friendly weather in the southeastern Amazon based on unusually high temperatures in the tropical Atlantic ocean. These periods of warm water temperatures are part of what climatologists call the Atlantic Multidecadal Oscillation, and they tend to shift weather patterns in a way that pushes a key rain belt in the tropics northward.

“Farther south, in Paraguay, Uruguay, and Northern Argentina, you get into an extratropical region where the sensitivity of drought is quite different,” explained Chen. “In extratropical South America, low sea surface temperatures in the tropical Pacific are more closely associated with droughts.” The Oceanic Niño Index (ONI), a measure of sea surface temperatures in the central and eastern equatorial Pacific, dropped below normal in May. NOAA officially declared a La Niña on September 10, 2020. La Niña typically brings wetter conditions to the northern Amazon, but drier weather to the southern part of the continent. Forecasters expect the La Niña to be of moderate strength and persist through at least the end of 2020.