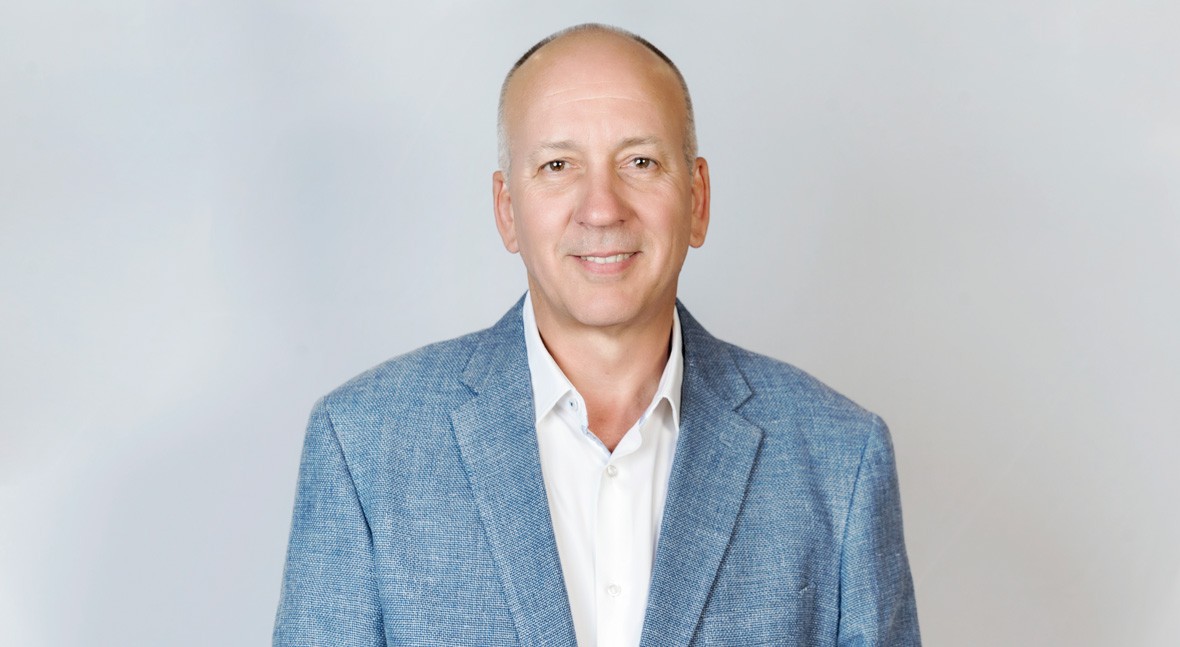 NEOM means “new future”: a region in northwest Saudi Arabia on the Red Sea being built from scratch. Conceived as a hub for innovation and a model for sustainability, NEOM is one of the Public Investment Fund projects, a key piece of Saudi Arabia’s Vision 2030 plan for economic diversification.

Water is integral to NEOM’s success. Intended as a centre of excellence for global water technology, the project counts on Saudi Arabia’s desalination expertise to, for the first time, produce water through desalination powered entirely by renewable energy and with zero liquid discharge. Gavin van Tonder, Executive Director of Water, leads the development of NEOM’s water and wastewater system, designed to be completely sustainable. In this interview, he tells SWM about the plans to make this living laboratory live up to its own expectations: becoming a global reference point for industry leaders and changing the future of water. 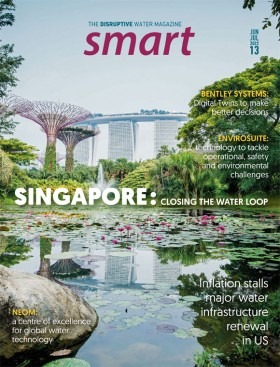 Can you briefly tell us about your career path and your current role at NEOM?

At NEOM, I am developing greenfield water infrastructure and implementing cutting-edge, high-recovery desalination and wastewater technologies. These include zero liquid discharge strategies that eliminate liquid waste and maximize water efficiency when managing wastewater. I am also leading plans to create a smart water distribution and transmission network for the NEOM giga-project.

Over the years, I have held senior engineering, field service and C-suite positions with companies around the globe. My roles have seen me working in the energy and utility sectors, including oil, gas, and water, focusing on innovative, smart solutions, systems and products that deliver efficiency and performance.

Having initially set out in the water industry in 2001, my career took me to Schlumberger, where I fulfilled a range of field service and engineering roles in locations, including London, Mumbai, Shenzhen, Singapore, and Vietnam.

While working at Itron in France and Austin, Texas, I eventually became President of the Water Division, assuming responsibility for the sector's global strategy, management, and growth.

I have started factories, facilities, and water infrastructure from the ground up in China, India, Indonesia, Australia, Malaysia, and Mexico. I presently serve on the advisory boards of many water technology companies across Europe and the Americas. Previously, I served on boards in China, Indonesia, India, and Australia.

In 2018, I accepted the exciting role of developing and executing the water strategy in NEOM, which led to the business and implementation plans, all of which are well underway.

I hold a bachelor's degree in Applied Science in Chemical Engineering from the University of KwaZulu-Natal in South Africa.

Historically human settlements flourished close to sources of water. What factors have led to leaving that dependency behind?

Human settlements initially flourished close to surface water sources, but then, due to advancements in extraction technologies, expanded into areas where water is also available underground. Many historic settlements quickly outgrew their surface water sources and came to rely heavily on water extraction from aquifers or water pipelines over long distances. The Romans and the Nabateans relied on gravity for water capture and transfer. Modern technology has enabled water pumping over distances, both horizontal and vertical.

The main issue today is processing wastewater properly and efficiently. Around the world, nearly 50% of wastewater is still returned to our environment without proper treatment, polluting our scarce freshwater resources. The population explosion has made this the central issue in today's water industry.

To what extent do you think technology can address any sustainability concerns? Is this easier to do in a greenfield project than in an already existing development?

To be sustainable is often thought of as development without harming our natural environment. I think we have made sufficient progress toward this to justify turning our attention to enhancing our environment, not merely doing it no harm. An example of this is stopping water abstraction from the groundwater to enable regreening of the surface or full recycling of water to ensure we attain a fully circular economy. The rewilding of nature and ensuring the provision of natural drinking and irrigation water are also important and attainable goals, as are preventing stormwater and sewage runoff from impacting our marine environment and focusing development on smaller areas while returning extraneous land to its natural state.

Utilizing technology to do this is key. At present at NEOM, we are focused on perfecting renewable energy desalination, accomplishing 100% wastewater capture through treatment, recycling and reuse. Most interestingly, we are looking at the utilization of smart sensors to be able to reduce water losses, which are a significant hindrance to sustainable water usage the world over. By mastering this, we will help protect the environment, minimize infrastructure sizes and reduce energy demand and chemical usage.

Being ‘water positive’ as opposed to merely sustainable is about asking the world what processes we can use to be more efficient with water. Personal consumption is not the leading cause of water inefficiency, and while it is important to take individual responsibility for water conservation, we need to look more at how we can improve consumption from, for example, agriculture and energy generation. The U.S. utilizes 43% of its freshwater abstraction for energy generation, which could be reduced by increasing the usage of renewable energy. Similarly, in the Kingdom of Saudi Arabia, around 90% of water goes to agriculture – an amount that could be alleviated by a greater focus on greenhouse production and a reduction in the use of pesticides.

Building a greenfield project as opposed to working on an existing development comes with different challenges and opportunities. Building a greenfield project has many benefits in upfront design and planning and the injection of new technologies. However, if an existing utility is allowed to run profitably and there is an investment in new technologies, then the same end results can be achieved.

How close is large-scale desalination using renewable technologies becoming a reality at NEOM? What about elsewhere in the world?

Feasibility studies have shown that our plans for brine processing can indeed create a profitable enterprise.

NEOM's location enables some of the best wind and solar energy effectiveness in the world. We are investigating pumped hydro, concentrated solar power, geothermal utilization, battery storage and green hydrogen utilization. We are also very interested in other new technologies, such as gravity power desalination and utilizing pumped seawater hydro to complete our renewable energy supply.

NEOM plans to use a circular design for a smart water network for NEOM. Can you tell us about the water solutions planned to ensure a sustainable and cost-competitive water supply with zero liquid discharge?

We plan to terminate all groundwater abstraction and move to a 100% desalination water supply. We will utilize renewable energy for all energy requirements and commit to a maximum of 3% water losses to reduce whole infrastructure and operational costs.

We are also committed to 100% recycling of wastewater to reduce water desalination production by 20%, protecting the marine environment from stormwater runoff, and capturing the water for reuse and groundwater injection. The design of our water storage will utilize only renewable energy for pumping and will generate energy from micro-hydro grids for further energy storage. We are implementing a minimum viable construction process for the growth of the infrastructure over time. This reduces upfront CAPEX and OPEX until it is really required.

NEOM has been defined as a "living laboratory." Do you expect the technologies and practices to be used at NEOM will be exported to the other Public Investment Fund projects (Qiddiya, Amaala, The Red Sea Development Company project…) and the rest of Saudi Arabia?

We have been given an opportunity to show the world what a high-performing water utility can look like, and we need to use that to foster change in the way water is perceived globally. Our initiatives have already driven change in the desalination market. Global interest is now very high in brine processing and we see more investment going in that direction.

The Red Sea Development Company project and Amaala are very interested in seeing how our brine processing project evolves as they consider whether they can use it going forward to reduce their impact on the environment.

In short, what is done in NEOM will benefit not just the industry, but the world.

How will digital technologies support water systems at NEOM?

Technology at NEOM is a means to an end, never the end itself. We are using technology to solve problems and increase efficiencies. Digital technologies bring efficiency to operations, reducing the overall cost of water and enabling a much higher level of service.

At present, the core function of our technology is to collect data and input it into a digital twin that will be used to guide initial construction and then, crucially, to manage ongoing operations. If we want to achieve less than 3% losses in the system, we need digital technologies to identify anomalies and resolve them quickly. Digital technology will be our eyes and ears in the field, allowing us to be responsive to issues and events when they occur. From a safety perspective, digital technologies will ensure we guard against any water quality issues.

Developing digital twins for several projects throughout NEOM has been a crucial way to reduce our environmental impact, increase efficiency and create a truly cognitive development – a core aspiration for NEOM. The digital twin of our water infrastructure that we are developing with international partners is going to drive the global industry in a digital direction once we have demonstrated its capabilities.

Traditionally, water utilities are government entities with a captive market, no competition and little incentive to provide a high quality of service. Digital technologies enable that to change and will have ripple effects through the whole market dynamic.

"Our initiatives have already driven change in the desalination market; global interest is now very high in brine processing"

What would you say to critics who see NEOM as something out of a science fiction novel or as greenwashing a place intended only for the very wealthy?

We welcome criticism from those with experience and knowledge. Ecocity in China, with which I was involved, is a joint venture between the governments of Singapore and China that started development in 2007. I remember there were many international critics at the time, yet there is now a large population living in what was previously coal field mining dumps. The critics who did not believe are gone, and the believers who had experience and knowledge are there.

A focus on sustainability and the environment is key to the development of NEOM. Any country in the world building a city from scratch is developing for the future and not the present, so while it may seem like science fiction, the world will be very different in 2030 and the plans must be laid now. Does it look like science fiction? Maybe, but it is for the future, so of course, it must seem futuristic, or we wouldn't be doing our job.

The size of NEOM and the expected population will demand a range of different jobs and people. A hydrogen plant, desalination plant, brine processing plants and greenhouses for agriculture all need to be operated. All the facilities will require operators and support staff, so to say it is only for the wealthy demonstrates a narrow understanding of what we are creating in NEOM.

People who want to understand what we're doing should visit us and get a first-hand experience of what we have already accomplished on the ground. They will leave transformed - of this, I am sure!