“Through the acquisition of Redexia, we continue our European IoT expansion and gain geographical coverage in another important market. The deal demonstrates the good cooperation between Polar Structure and Netmore and consolidates ECN’s position as one of the fastest-growing network companies in Europe,” says Tobias Emanuelsson, CEO, Polar Structure

“Thanks to Netmore and ECN, we will be able to offer LoRaWAN in the 20 largest cities in Spain, allowing us to take the next step in deploying large projects with our customers and partners. Furthermore, Netmore’s technical expertise will provide our existing customers with increased support for their projects. This gives us great opportunity to strengthen our leadership in the Spanish LoRaWAN market, ”says Alex Bryszkowski, CEO & Co-founder, Redexia

The deal in brief – synergies and strengthened commercial conditions

The deal includes LoRaWAN infrastructure that will be directly connected to Netmore and ECN’s IoT networks, giving Netmore’s ecosystem of customers and partners immediate access to the growing Spanish market.

Finally, the acquisition provides both technical expertise and commercial momentum as the Redexia organisation joins the company and will continue the successful development of the Spanish market.

“The acquisition of Redexia demonstrates once again why our well-developed partnership with Polar Structure uniquely positions both Netmore and ECN to operate in the rapidly growing LoRaWAN market in Europe. Thanks to Redexia’s strong local market presence, we are entering the Spanish market with good commercial prospects that over time will result in more connected devices and increased monthly revenues”
says Ove Anebygd, CEO, Netmore Group

As a result of the investments being made to digitise gas, water and electricity metering systems, the demand for LoRaWAN in Spain is increasing. Netmore and ECN will initially connect Redexia’s existing network to its own network, and then begin deploying LoRaWAN in Spain’s 20 largest cities.

This provides better conditions for deploying large-scale, socially beneficial IoT projects across Spain, while growing the addressable market of Netmore and its partners by an estimated 19 million households and several million businesses.

The Spanish government has declared a goal of achieving 13.5 million connected smart meters by 2025, a target supported by several drivers. These include the social and efficiency gains resulting from making the water and gas distribution network ‘smart’, and the market impact of European investment funds contributing to the projects. Overall, this creates good conditions for significant sensor growth in Netmore’s LoRaWAN network.

Netmore and ECN have initiated a major expansion of LoRaWAN in Europe during 2022. It now offers LoRaWAN in Sweden, the UK, Ireland, the Netherlands and Spain. In addition, there are roaming agreements that also provide coverage in Finland. 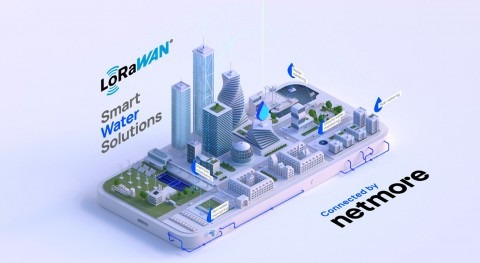