A $34 million hydroelectric plant to be built at the Cannonsville Reservoir, New York

The New York City Department of Environmental Protection (DEP) today announced plans to build a $34 million hydroelectric plant at the Cannonsville Reservoir. The 6-megawatt facility will generate enough renewable electricity to power more than 3,500 homes annually by harnessing the force of water that is continuously released downstream of the reservoir. DEP expects to complete the 4,400-square-foot hydroelectric facility by 2025.

The revised proposal follows a 2015 engineering assessment at the site, which found an artesian aquifer downstream of Cannonsville Dam. Initial plans for a 14-megawatt facility, including a 9,000-square-foot powerhouse, were deemed infeasible after the initial examination of conditions at the site. For more than two years, DEP has worked with experts to study the aquifer and develop a revised plan for generating clean energy at the site.

“DEP is proud to announce a project that continues to expand the amount of clean energy produced by our vast water supply system,” DEP Commissioner Vincent Sapienza said. “We hosted more than a dozen meetings and listened to more than a thousand people, and we engaged a team of expert engineers to develop plans for hydroelectric power generation at Cannonsville Reservoir. As we continue work on this renewable energy project, DEP pledges to keep our neighbors apprised of all ongoing activities.”

“The climate crisis is real and it’s urgent, and that’s why the City of New York is aggressively investing in clean energy,” said Lisette Camilo, Commissioner of the New York City Department of Citywide Administrative Services (DCAS). “Mayor Bill de Blasio set an ambitious goal to reduce greenhouse gas emissions in New York City 80 percent by 2050, and projects like this will help us get there.”

DCAS is responsible for purchasing all the energy required to run New York City’s government, and for managing its energy use. Through managing the City’s energy portfolio, DCAS is at the heart of New York City’s efforts to reduce its carbon footprint 80 percent by 2050 and to eventually convert 100 percent of its energy use for government operations to renewable electricity. DCAS is providing $9.8 million for the design and $7 million toward the construction of the hydroelectric plant at Cannonsville Reservoir to help the City meet these ambitious goals.

DEP will host two public meetings on December 14 to share additional information and answer questions about the revised plans for a hydroelectric plant at Cannonsville Reservoir. Those meetings will be held at the following locations and times:

The proposed hydroelectric plant will include two 3-megawatt generators inside a 4,400-square-foot powerhouse adjacent to the West Delaware Release Chamber. The turbines will generate an estimated 32,000 megawatt hours of electricity each year—enough to power 3,547 homes, or the equivalent of taking 5,068 passenger vehicles off the road. The plant will avoid the emission of 23,666 metric tons of carbon dioxide per year. Electricity produced at the plant will be introduced into the grid through a new substation that will be constructed several hundred yards downstream of the dam. The project will create dozens of construction jobs, several full-time jobs to operate the finished plant, and it will generate hundreds of thousands of dollars in new property tax revenue for the Town of Deposit and the Deposit Central School District.

The climate crisis is real and it’s urgent, and that’s why the City of New York is aggressively investing in clean energy

The hydroelectric facility will utilize water that is continuously released downstream of Cannonsville Reservoir. DEP releases water downstream of its three reservoirs on the headwaters of the Delaware River according to provisions of a 1954 U.S. Supreme Court Decree, and an interstate agreement called the Flexible Flow Management Program. The amount of water released from these reservoirs, including Cannonsville, is determined by the season, reservoir storage, hydrologic conditions in the Delaware River, and other factors. DEP will not release additional water from Cannonsville Reservoir to generate electricity; the existing court decisions and agreements will determine how much water goes through the hydroelectric facility each day.

This revised plan for hydroelectric power at Cannonsville Reservoir includes a smaller powerhouse than the original concept that was developed in 2009 and licensed by FERC in 2014. During a 2015 geotechnical assessment to support the foundation design for the larger powerhouse, DEP contractors found that an artesian aquifer—a naturally pressurized pocket of groundwater—was present downstream of Cannonsville Dam. DEP engineers and contractors subsequently performed work to reduce the condition by installing relief wells and used a special grouting technique to shut the boreholes that tapped into the aquifer. The artesian aquifer does not affect the structural integrity of the dam, but its location required DEP to design a smaller hydroelectric facility that will be situated outside the artesian area. The revised plan will draw water into turbines from an available pipe inside the existing West Delaware Release Chamber. More information about the 2015 geotechnical work can be found here.

DEP notified officials at FERC this week that it will no longer pursue the original project. The smaller, revised hydroelectric plant may qualify for a license exemption from FERC because it is less than 10 megawatts. 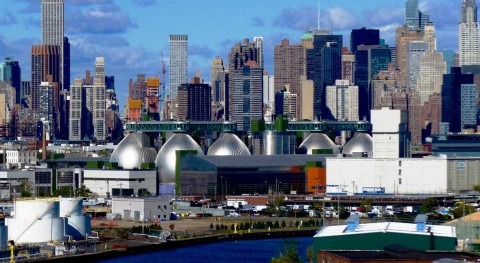 Biden plans to fight climate change in a way no U.S. president has done before
END_OF_DOCUMENT_TOKEN_TO_BE_REPLACED