NOAA and its research partners are forecasting that western Lake Erie will experience a significant harmful algal bloom (HAB) this summer.

Lake Erie blooms consist of cyanobacteria, also called blue-green algae, that are capable of producing the liver toxin microcystin that poses a risk to human and wildlife health. Such blooms may result in higher costs for cities and local governments that need to treat drinking water, prevent people from enjoying fishing, swimming, boating and visiting the shoreline, and harm the region’s vital summer tourism economy. These effects will vary in location and severity due to winds that may concentrate or dissipate the bloom. 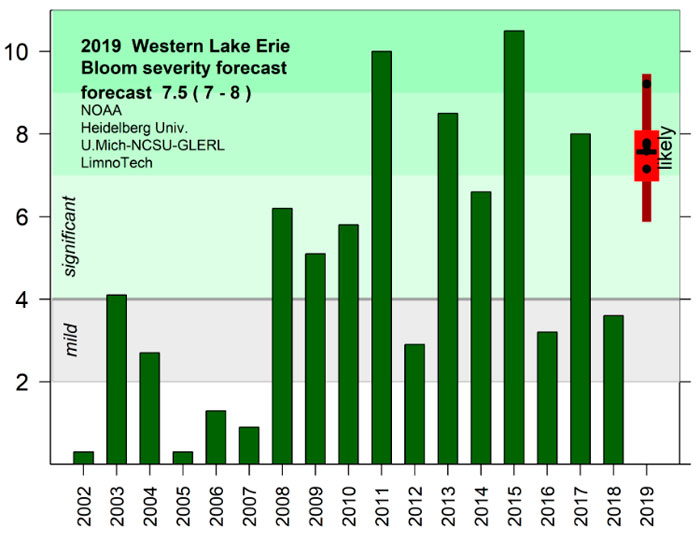 The size of a bloom isn’t necessarily an indication of how toxic it is. For example, the toxins in a large bloom may not be as concentrated as in a smaller bloom. Each algal bloom is unique in terms of size, toxicity, and ultimately its impact to local communities. NOAA is actively developing tools to detect and predict how toxic blooms will be.

This year, the lake temperature has remained relatively cool due to the higher-than-average rainfall in the region, so the bloom is not expected to start until late July when the water temperature reaches 65 to 70 degrees F. This contrasts with 2018, when exceptionally warm weather at the beginning of June caused an early start. Calm winds in July, especially in western Lake Erie, tend to allow the algal toxins to concentrate, making blooms more harmful. The bloom typically peaks in the western part of the lake in September. Most of the rest of the lake will not be affected.

“This extremely wet spring has shed light on the movement of nutrients from the land into Lake Erie,” said Christopher Winslow, Ph.D., director of Ohio Sea Grant and Stone Laboratory. “Despite the predicted size of this year’s bloom, portions of the lake will be algae free during the bloom season and the lake will remain a key asset for the state. Ongoing research continues to help us understand bloom movement and toxin production, and remains vital to providing our water treatment facilities with the tools, technology and training they need to keep our drinking water safe.”

The Lake Erie forecast is part of a NOAA ecological forecasting initiative that aims to deliver accurate, relevant, timely and reliable ecological forecasts directly to coastal resource managers and the public. In addition to the early season projections from NOAA and its partners, NOAA also issues HAB bulletins twice a week during the bloom season.

NOAA continues to expand the use of satellite data into its Lake Erie Harmful Algal Bloom Forecast System, which is helping improve the accuracy of bloom forecast products. The data comes from the European Union’s Copernicus Sentinel-3 satelliteoffsite link, which has instruments that measure coastal water color, and have proven to be especially useful for detecting and tracking algal blooms. NOAA is also continuing to work with its academic partners to refine and improve the models used to develop the forecasts.

“This spring brought regular, heavy rainfall to the Maumee River watershed which would normally carry a lot of nutrients into the lake,” said Richard Stumpf, Ph.D., NOAA’s National Centers for Coastal Ocean Science’s lead scientist for the seasonal Lake Erie bloom forecast. “However, due to the amount of rain this year, farmers were unable to plant their fields which reduced the nutrient concentration. That combined with higher than normal lake levels, presents an opportunity to test the accuracy of our models.” 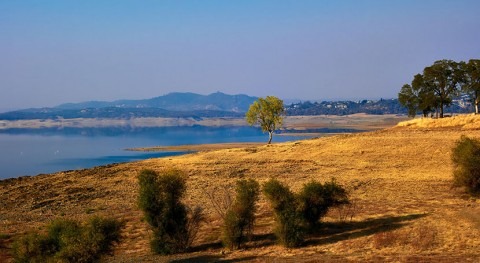 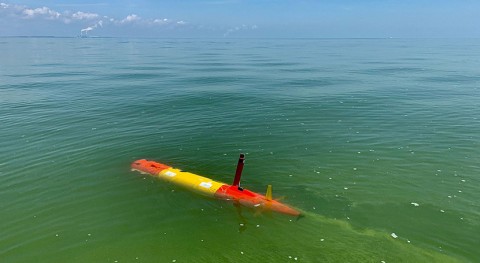 June 2019 was hottest on record for the globe 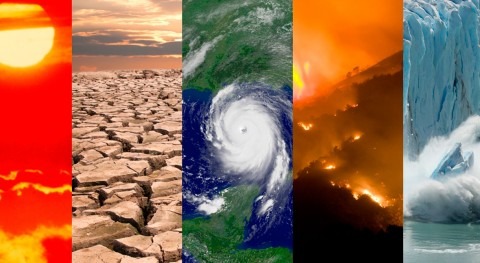 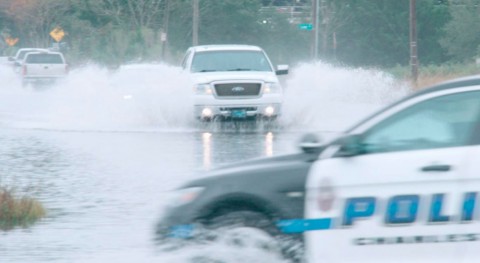